We’ve heard a lot of feedback since launch about what we consider to be “artist equivalence” issues. Broadly speaking, these issues fall into two classes:

Why Does This Happen

We’ve been working on some long-term strategies to improve our handling of these cases, but I wanted to provide a little background on why this happens, and let everyone know we’ve decided to also implement a short-term fix, since we know how frustrating this can be.

Our metadata service uses a variety of clues to determine a performer’s identity, so we can be sure we know when a performer is Miles Davis (the legendary, prolific and influential Jazz trumpet player) versus Miles Davis (a guy who played bass on one Kanye West track).

Usually we get good data and can keep track of who’s who, but when someone somewhere at one of our metadata providers was entering data for a release, if they credited the wrong guy, it can have disproportionate effect. The two performers in the example above are clearly not the same Steve Wilson to our system, that is until Steve Wilson the sax player appears on a Porcupine Tree album.

In that case, the system does something “smart” and merges these two people into one. This works great when a single performer has appeared on a wide variety of releases (think about a prolific session player), or when someone’s performed under a couple of different spellings or aliases over the course of the career (Steve vs Steven), but bad data can muck things up when everything aligns just so.

We’re working on a couple of new strategies for improving our accuracy with regards to equivalence issues, but we’ve also started to fix some of the more egregious ones by hand. It’s time consuming for our team, and it also takes time for the changes to propagate first into the cloud database and then into your collection, so be aware that I can’t promise to always turn around fixes immediately.

That said, I am pinning this thread to the top of the metadata corrections section, and I invite everyone to let us know any examples that specifically fall into one of the two cases listed above. If you’ve already reported them on the community site, please confirm the issue is not already resolved, and then link to your original report below.

Roon doesn’t differentiate between the 2 Avishai Cohen’s - the trumpet player and the bassist. I don’t know how you solve this one, but it would be nice if you could.

Still confused. Same name, one’s a bassist. One’s a trumpeter. Don’t play on each others albums. The bio etc, is for the trumpeter. The Tidal listing seems to blend them into one.

Will do this when I get home. Quick question - is there a way to have Roon filter out and only show artists where there is another separate artist listed with the same name?

Hi Mike ,
Great work ! In the other instance mentioned in that original Steven Wilson thread I still have 2 John Mayers !
Though the second one only applies to the live ‘Where the Lights Are’ album which was recorded several years
after the first John Mayer’s death .

Intrigued to find the link between them now .

Have the same problem with 91 Suite who have released 2 albums. Roon currently shows them as two albums by two different bands with the same name

Is there a good way to crowdsource this and have the community help out with fixes?
Having easy and fast tools to make manual adjustments would be helpful in any case (classification will never be 100% perfect)
If there’s an opt-in to contribute corrections back, that data could help. There could be a confidence rating based on the reputation of the contributor and/or collecting a number of identical corrections (3?) as a vote before accepting changes – ideally backed up by some smart validation utilizing the existing cloud databases)?
I know … easy to make a wish, much harder to build, test, fine-tune, etc. I just don’t think that the metadata thing can ever fully be resolved on by the Roon team, and there are precedents for the effectiveness of collective efforts e.g. with the CD info database services? 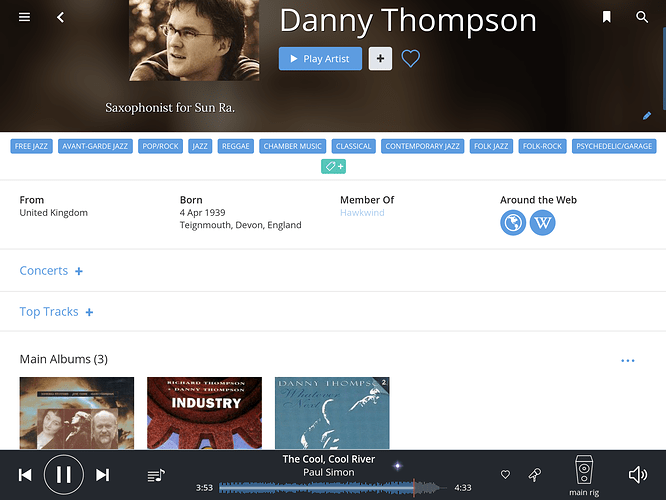 I hope I’m understand what exactly you are asking to illustrate but this is not the correct Danny Thomspon.

Yup, the one is Richard Thompson’s brother, the other isn’t.

Richard and Danny are not related to the best of my knowledge.

Ah. Just got an Avishai Cohen album, then got some more, and I was confused…

There are two “Charlie McCoy” artists in history. There is an alive and well Charlie McCoy who worked with Dylan, REM, Gordon Lightfoot, Elvis, Johnny Cash, eyc. But his Roon artist entry is for the old blues artist who died in 1950

Just found another: John Taylor is a contemplative British jazz piano player, having played with Norma Winstone and Kenny Wheeler, making up Azimuth, etc. ECM stuff. The bio says, “One of the weirdest things about Duran Duran is that every one of its members became a hard rocker.”

John Taylor is of course not a rare name, so something deeper must be done to identify the right one.

Lisa Miller, the Australian singer/songwriter (Car Tapes 1 & 2, Morning in the Bowl of Night, Version Originale ) is misidentified by Roon as Lisa Miller of the Trailer Park Honeys of Portland.

The Australian singer/songwriter Lisa Miller is the vocalist on “I Hope I Never”, track 9 of “She Will Have Her Way; the Songs of Tim and Neil Finn” on Tidal.

My local albums of hers, Car Tape, Version Originale, Car Tape 2 and Meet the Misses along with the above Tidal compilation are attributed by Roon to the USA artist Lisa Miller (Trailer Park Honeys) who has the bio in Roon.

This is the Wikipedia entry of the Australian artist, which has a better discography than her Discogs entry.

The Australian band is mixed up with the Canadian band (which has the bio in Roon). This is the Wikipedia entry and [Discogs entry] (http://www.discogs.com/artist/794228-Harem-Scarem-2) for the Australian band

The third album of the Australian Cybotron (Implosion 1980, Aztec rerelease) is misidentified as the USA Cybotron (formed 1980).

My local copy of the Australian band’s album “Implosion” is attributed to the USA band.

The Australian Band has the bio and album in Roon, but Top Tracks and Appearances reference the 60’s act.

Spectrum - Part One is correctly identified as the release by Aztec and has the right cover art for the Australian band Spectrum: [image] The hyperlink to Spectrum, however is to the Pete Kember electronica project.

Pete Kember (UK Artist) has the bio in Roon, albums for the Australian band are attributed to him.

This is the Wikipedia entry and Discogs entry for the Australian band.

Edit: Now there is a band entry for Spectrum(16) which is the designation for the Australian band on Discogs. But the name of the band is just Spectrum, discogs adds 16 for disambiguation.