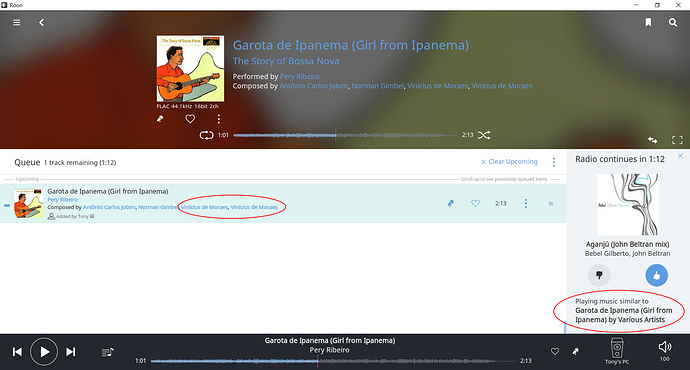 Hope support can take a closer look. Maybe there are other ideas.

Bullet Point #1 is discussed here by Mike: No artist listed for unidentified comps, you can give that thread a read but essentially it says that the right data for Track Performer is not listed, then it could show up as Various Artists.

Bullet Point #2 artist equivalency issues are discussed in this thread: (Artist Equivalence Issues). I would double check the Album Browser/Track Editor to make sure that the composer is not listed twice in the file data, and you can always edit the credits in track editor to prefer your edits rather than the Roon metadata.

I guess I wasn’t very clear.

Bullet point #1 is not addressed by Mike’s post. He is addressing two cases

My case is a third case:

This is the case, with the example I gave. But I have a lot of compilations all tagged the same way. Album Artist = “Various Artists” and each Track Artist is tagged with the individual performer. I have randomly tested at least a dozen or so. The result is always the same. You must have compilations there at roon to replicate this? Here, completely at random is another example: 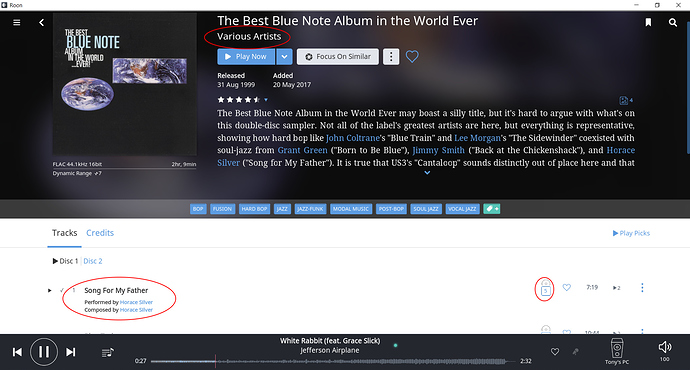 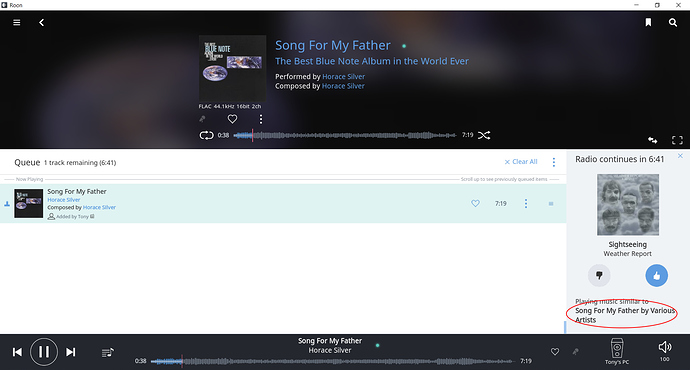 As it happens, Weather Report was the last thing I was expecting after Horace Silver. It doesn’t make any sense to me that with so much available information roon would be resorting to various artists to construct a radio queue.

Bullet point #2 seems to have resolved itself. I assume some background processing is complete. The duplicate composer has merged to one.

Bullet point #3. Again I find it easy to replicate. Only solo compositions are being displayed. I hope Joel can take a closer look.

As it happens, Weather Report was the last thing I was expecting after Horace Silver.

I don’t think it has any bearing on the actual Radio selection process, per se. Weather Report and Horace Silver share the Jazz tag; thus the connection; among other things.
What you are seeing is, I think, just a display bug. The same display bug haunted the theater view ages ago. See:

I hope so. I also mentioned that as a possibility in my opening post. Difficult to tell though as radio often seems very random to me. It would be nice if roon could rule out this various artists issue as having no impact on radio.