Artist naming - inconsistent treatment of 'The'

Tried searching fo help on this, but difficult to narrow down when using ‘The’!

Here’s a summary of the problem:

I have 17 Beatles album, all with Album Artist tags of ‘Beatles, The’

However, on import Roon has identified 15 albums as ‘The Beatles’ and 2 as ‘Beatles, The’

I can edit the details of the artist name so they are the same, but it then just displays two artists with the same name.

How do I force Roon to merge the artists into 1?

BTW, this is an example, this is happening with many artists in my collection
Thanks
Nick

Let’s drop flags for @mike and @joel . Artist duplication and equvalence issues crop up now and then and are worked through in a thread in Support/Metadata. But Beatles, The is a special case.

Hi @Nick_Stamp. Roon album “identification” is a very specific thing. Please can you confirm that the two albums displaying as “Beatles, The” have actually been identified by Roon? (if you click on the album, is there a clickable “Unidentified” link under the Released/Added dates?

FYI, at the moment, we don’t do any artist name disambiguation on the Roon client (as opposed to in the Roon Metadata Cloud). From what you’re describing, it sounds like the albums have not been identified and you’re simply getting the album artist values from your tags. Assuming this is correct, there are a couple of things that you can do, but I’ll wait for you to get back to me first.

thanks Joel; yes, they are showing as unidentified.

I have now gone and gone through the identify process to match the albums, and that has solved the problem.

I know I have plenty of examples of this to resolve - what do I do if the album is not listed (more likely old CD singles for UK indie bands will be harder to identify, e.g. The Pigeon Detectives)

thanks again for your help
Nick

Many systems, including Roon, automatically takes account of the definite article when parsing the ALBUMARTIST tag, but I’m guessing that your previous one didn’t. The lack of consistent tagging guidelines is a real pain, particularly when you’re trying to get your tagged files working with different music management software. My suggestion, which will work with Roon and a number of other systems, is to copy all of your ALBUMARTIST tags to ALBUMARTISTSORT tags and replace the contents of the ALBUMARTIST tags with the canonical artist name where appropriate. E.g. “The Beatles”, “The Pigeon Detectives”.

You’ll need to force Roon to re-read the tags though, but that is quite easy:

Sorry for the additional work, but I think that this is the best solution for you (for now).

Thanks for the advice - I think the issue is even wider than you state as you might have a scenario using UPNP for example, where the control point implements its own behaviour and completely ignores what is sent by the UNP server. Minimserver, for example, is great and extremely flexible, so I can configure it to ignore ‘The’, but the Naim app doesn’t follow suit.

The other reason for retaining ‘Beatles, the’ is to aid viewing of a library on a NAS, MAC or Windows file explorer.

More queries to follow as I review my library in the coming days! (I do always try to find an answer first myself though)

Is there a way of searching to find all the unidentified albums that need to be looked through? I tied a standard search but got no matches

In Album view, press the Focus button. In the Focus window, scroll all the way to the right and press Inspector. In the Inspector window, select Identified – a green ‘Identified’ button will appear at the top of the Inspector window. Pressing the + icon will create a negative selection ('Show all albums not identified) – the button will turn red and the + will turn into a -. Now, only unidentified albums are shown. Powerful stuff, focus. 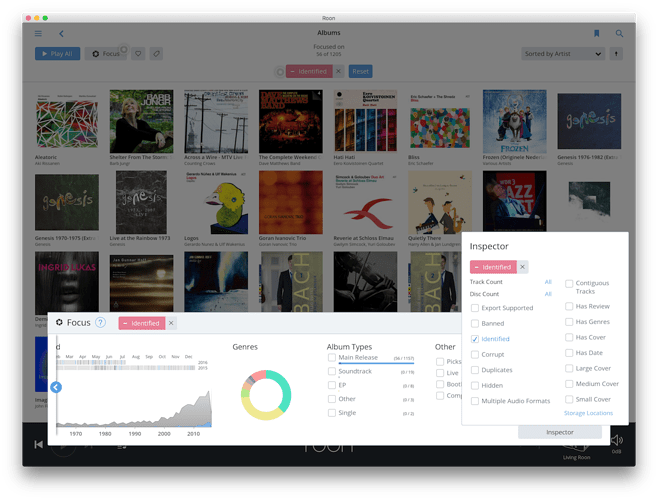 It seems different tagging tools use one of these values and don’t want to pick the wrong one!
thanks
Nick

Hi @Nick_Stamp. Sorry for the delay; been on holiday

At the moment, Roon doesn’t use ALBUMARTISTSORT, but if you are able to choose, I would recommend using the form that I’ve just typed. i.e. One word and in upper case.