If this needs to be moved elsewhere just le me know where it went. Thanks.

I have had problems with the OPPO 205 playing music via the rear USB connection. It plays for a while then starts to drop and then after a while of that, it starts making interference sounds, light and short at first but it gets worse and stops altogether.

I had the choice of sending it back at their expense and if they couldn’t fix it, they would refund me. As far as I know there are only two official OPPO repair people, one in Germany and one just 60 miles from me.

I had a strong feeling that if I sent it back, I’d just get a refund and never see it again. I didn’t know what to do.

My husband said to cancel my return through Ebay and keep it because the picture quality is excellent, no sound issues, it plays my SACDs and VD_Audi discs excellently. He says you have other DACs so it doesn’t matter. I agree with him after couple days thinking about it and realizing I was allowing my pride to get in the way. It just really rankles to have an important part not working and accept it.

I cancelled my return. It is with my usual audio man right now who at his home got exactly what we got here. When he took it to the show roon and Andrew the repair guy set it up, it played perfectly for hours! That was yesterday. If he can’t do anything, i.e. if it is the bard the USB connects, then it will have to go OPPO. If it just the USB connections he can fix that as they are separate I have been told.

Now to the subject line.

He brought with him and Audiolab 8300a integrated amp. It has the 8300cdq attached o it and also the Yammy AVR via the pre outs on the Yammy.

This allows switching the amp to video and it then is part of the surround sound TV system via the Yammy.

BUT when switched to CD it plays the music just through the front speakers (Monitor Audio Gold 300).

The sound is astonishing. Now THIS is what I have been after. It is not just the sound quality. I sounds as if it is surround sound. Truly. I sit about 12ft away from the front spwears and they are about that distance apart. They are turned slightly inwards.

The surround effect differs from album to album. Oxygene was like it was all around me. MCMXC a.D. is the same.

I have no idea how it can slound like it is 5.1 when it is just 2. John says it’s the acoustics in our roon which is mainly glass with losts pf wood and leather and Amtico floor( faker wood).

I was wrong. Completely. Yes, Pure Dirtect on the AVR was giving me btter sound but I dismissed those who said I really lought to use an tehrated amp as audiopjile snops. No. They were right. I also wasn’t aware I could connect the AV R to an integralk ampo.

So my apologies to those who were giving correct advice to me which I argues about when I clealry didn’t know what I was talking about as I had never used an IA.

I am delighted with what I hear now. Forums are so good, especially when thery are as friendly as this one any nastiness is nipped at the bud bedfoe it bexomes a slagging match.

I hopw I have been clear. Nothing seems to be working that well today with regard my body/brain. A lot of pain and balance ussiues made wroe my muscle relaxants and a hefty morphine dose which has dialled it all down except balance is worse, as would one expect.

Thanks for sharing your story of 2-Channel discovery. Stereo sound reproduction, done right, can be nearly as enveloping as full surround-sound.

Twelve feet is pretty far apart, but you definitely have the right idea. If you have the space and are open to experimenting, ten feet apart with a twelve feet (tweeter to ear) listening distance should give you more presence without sacrificing soundstage. Enjoy!

The way our set up is we cannot get the front speakers closer together. They are either side of wooden cabinets which take up almost all the wall space. The room which I designed but didn’t build (of course), is 23ft by 13ft. It is full now.

Audiolab are a hidden gem , I have been using the M-DAC as my headphone amp for years with Sennheiser HD800 sound lovely and reliable , daily use for 7 years 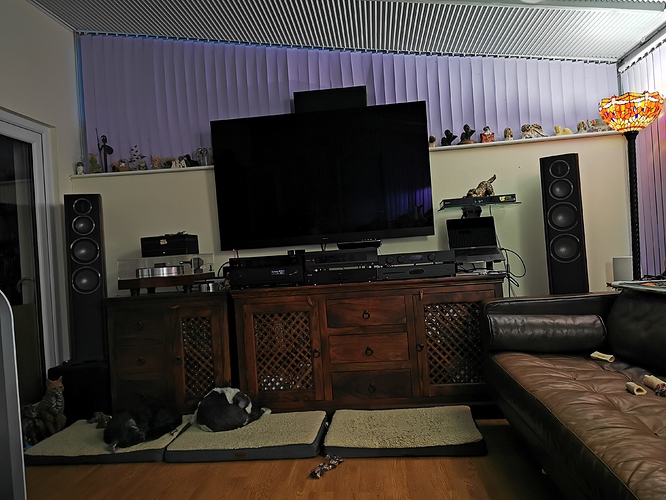 Why I can’t move front speakers.

I am listening on headphones right now. There is no volume control available on the 8300cdq because, I assume, it is connected to the 8300a which doesn’t have a headphone outlet.

It would seem I have no way to adjust the volume when using cans. I have tried changing settings in Roon fixed volume to device volume and back again but it made no difference.

I am listening via a Micro Rendu.

You could try DSP volume. My preferred solution is to enable Volume Leveling for the zone and use Headroom Management to apply a fixed amount of attenuation, up to -30 dB. This approach is less convenient, but all of the processing is done in Core, which I prefer to DSP volume, which runs on the endpoint device.

I just want to point out that the dogs are the best thing in the whole picture.

Actually, my real preferred solution is to use a dedicated headphone amp. This one is a steal for $249.

You’ll be pleased to know that there are 4 more of them. WE have 6 altogether, all but one related. The one that isn’t is a Mini Longhaired Dachshund and the other 5 are all Lhasa Apso.

I’ll look into this but you have just made me realise that the Lehman thing lying by the sofa is a headphone amp.