Audio stuttering when app is moved to background[Ticket in]

Noticed today that audio starts to stutter in the android app when the app is not in the foreground. Verified the issue on another device, both running Marshmallow.

Can not recall this when I had Lollipop on the devices. Is this expected behavior in Marshmallow? Or maybe I never tried checking my mail at the same time as using Roon before and the issue has been there all the time?

What device is this happening on? I have the Pioneer XDP-100R with Lollipop and the Nexus 6P with Marshmallow, and neither device has issues when the audio is in the background. Wondering if it has do to with system resources, like RAM or processor power?

Both are Sony. One Z3 compact tablet and one Z5 compact phone.

I’m experiencing this as well I just got a new phone ( LG-V10) that came with lollipop installed. Roon worked great and I experienced no stuttering when running in the background. However as soon as I upgraded to Marshmallow the stuttering starting unless roon was fully open on the screen. One exception to this is when I start roon playing on my phone using my tablet as a remote to play it.

My Samsung S2 tab and onkyo DP-X1 do not experience this and are both running lollipop.

Just as an aside the LG V10 is a terrific phone for audio with a separate ESS Sabre DAC/Amp built in.

@Joachim_Fishman were you able to solve this problem? I’m still experiencing this problem on my LG V10 but it works fine on my Samsung S2 tablet. I can get it to work with a workaround by causing the app to restart by changing the background from light to dark and then it’s fine until I start a new session and then the problem reappears. Both my devices are on marshmallow.

No progress. Both devices still have the same issue. The phone have had an new marshmallow release but no change.

Your workaround almost made my day. After a while I get occasional dropouts but no stuttering audio.

Hope the roon team can find some time to look into this and the display sizing issue soon.

Yes I do hope the Roon team can get to some of the issues with playback on the app. I’ve basically abandoned using it as a playback device and am using it only as a remote, which it is great for. I like the idea of having my Roon library on my phone or my Android DAP anywhere I am around the house without being tethered to a computer or box, so I’m hoping this player reaches the capability of other dedicated Android players such as UAPP. Hope you’re able to resolve your stuttering issue as well.

We have this too with our Sony Z3’s and Nexus 9.

@danny @mike I wondered if this one has been picked up by the android dev/team at all, as its still occuring

Tidal and other audio apps don’t stutter when in the background, so it seems the devices are powerfull enough?

Same here, on Sony Z3. Changing background theme indeed helps, so it should be solvable…

Hello guys would you mind to give us the exact version of the Android your phones are running and Android security patch level?

They all stutter in the background.

Hey @mannp, thanks for the info.

Is there a chance that one of your devices can be updated to the newer Android version (6.1.1 for e.g) ?

Hi @vova you would have to ask Sony that question, as I believe I am on the latest versions they have released.

So the short answer is unfortunately not.

That said, it makes no sense, as no other apps stutter on these devices and they are still pretty recent devices.

Edit: My Xperia Ultra is on 5.1.1 and an enhanced version of sony’s OS and it does not stutter.

First is from a Sony Z5 compact phone. Second is a Z3 compact tablet. Both are on the latest systemrelease from Sony. Both suffer from the stuttering issue. 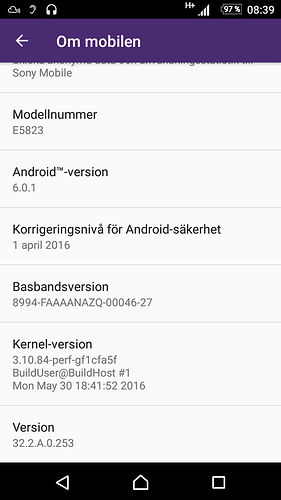 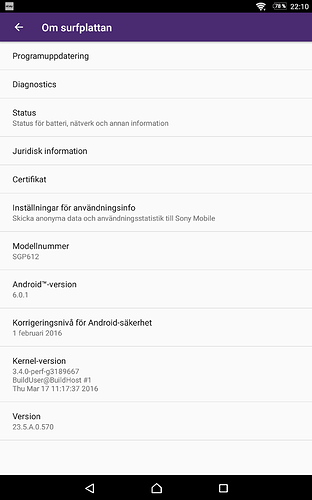 Another example that stutters

This the iost recent version of android from LG.

I was wondering if Roon have had any progress on finding the issue with the stuttering at all?

My LG V10 seems to be working fine with the latest updates. I can now move Roon to the background with no stuttering. Thank you for the fix.

I now look forward to a more robust USB implementation with bit perfect output similar to the UAPP app as I’m really enjoying the EQ capabilities of Roon in conjunction with Tidal.