I just set up the Auralic Altair in my bedroom system. Everything is working great, but I’m curious about how the Altair is listed under Networked devices as “Uncertified”. What does that mean to the end user, and will it be updated to “Certified” in the future? 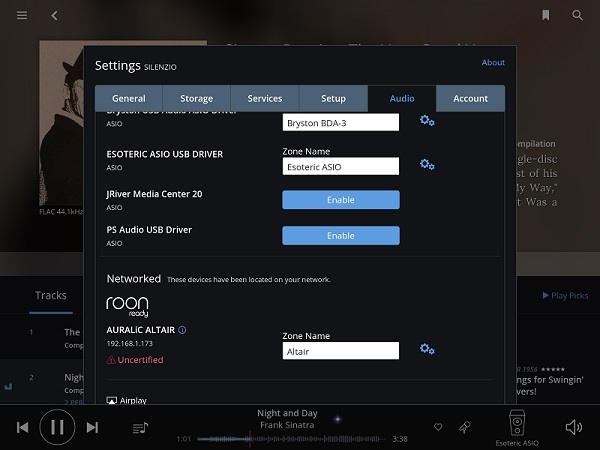 It means what it says

. We haven’t certified the device yet.

We are following up with Auralic to understand why this device is out in the wild and being marketed as Roon Ready before its Roon Ready certification is complete.

Well that is interesting. I thought I purchased a RoonReady device. This is not good.

FYI…Auralic is also telling me that sound quality will be superior using their Lightning DS app instead of Roon. I can’t see how that is possible. Shouldn’t a (certified) RoonReady device be bit perfect and therefore no different from using their "Lightning Server??

I try to avoid “bits are bits” debates. Nobody wins.

As do I Brian. I’ve asked Auralic for a technical explanation of why they believe that the same music delivered from my NAS to the Altair would sound differed via Roon vs via their Lightning Server/Lightening app. We’ll see what they say. Interface-wise there is no comparison. Roon wins!

Any update on this? The Altair could possibly end up on my short list, but this makes me hold off a little bit for now.

So the (quite plausible) explanation for the sound quality benefits of the Lightning DS app is that it pulls the entire song into memory on the Altair and plays from there. Makes perfect senses. However, any slight increase in audio quality is outweighed, for me, by the UI and features of Roon.

and how does this plausibly improve sound over streaming the content via memory? So much bull sprouted by those trying to make a buck

Seriously? Stable play from memory is almost always preferred to on the flying streaming/conversion. Believe what you want, but I’ve heard this with my own ears. I’m not debating marketing hype. I have to agree with you there!

Great POV, and well stated. I do remember reading that some time ago.

@spockfish, We certified a firmware update to the ALTAIR last week…I don’t know if it is released yet, but I’m sure it will be eventually, and they’ll announce.

@scirica, More recently on the topic of memory play…. I was disappointed with the lack of feedback following that post. I was prepared to bang out a product plan if someone had a clear proposal

The “bursty vs smooth” aspect is a tricky thing to navigate, and very difficult to measure fairly, since it’s easy to miss the first burst when setting things up, and many tests don’t last long enough to get to the second one.

@brian, thanks for pointing me to that conversation about memory play and the contrast with how Roon is constructed. I learned a lot from your post there and it’s all starting to make a little more sense. Actually, I’m starting to see “memory play” as more of a convenient marketing term from those manufacturers that produce closed, “simplified” systems where this is possible.

Last night I spent some time on my Altair system going back and forth between Roon play and their Lightning DS app running the Lightning Server. I honestly couldn’t hear a difference in the hour or so I spent between the two configurations. Both were playing music from my Synology 214+ over 5G wifi to the Altair. Altair was connected via XLR to a Sennheiser HDVA 600 amp in balanced mode to Sennheiser HD800 cans.

I’m a believer in Roon going back to my early discussions with @Mike before the beta was even released. It has been really special to watch this company grow and evolve into the “disrupter” that it has become. Everywhere I go and talk about digital music one theme is constant…Roon gets the human side of how we enjoy our vast libraries of archived files. No one is close.

@brian I noticed in the Altair software release notes for the latest version (4.03) that was released on September 11 that Auralic states “Roon software compatibility” as one of their improvements. I guess that’s not the same as RoonReady certification, is it? Roon still shows this new version as uncertified. Any idea if they will pass certification soon?

Yeah, that’s the firmware update I mentioned in my last update. 4.0.3 is Roon Ready.

It will not show up as certified in Roon until we push a software update that recognizes the device as such.

Any idea when we’ll see the next build of Roon?