Hello,
I just purchased the Auralic Aries G2 and when I hook it up to ROON as a ROON Ready endpoint, it says it is ‘uncertified’.
What does that mean and is there anything I can do to address it?

You can re-direct the issue to

Where all about AURALiC

Flag @Xuanqian , he will answer your queries.

Nothing you can do, Roon staff have indicated they have one now and it’s going through certification.

Xuanqian has said that his streamers will be Roon certified. He wants to get his firmware where he wants it before giving units to Roon to test. They work fine with Roon even though the say uncertified. I had the Aries and now have the Vega G2.

Are you planning on auditioning the G2 Leo clock?

Not sure if you are addressing me.

I would love to audition the LEO GX. I would want to be serious about buying it if I liked it and just can’t get there now. Cost even more than the VEGA G2 itself. Sound I am getting now with the VEGA G2 and the rest of my system is quite satisfying and it’s hard to justify.

I would love it if Xuanqian would do a “tour”. Tours, as you may already know, are common with internet only manufacturers and sellers that will send a unit to the first on the list for a couple of weeks or so. That person sends to the next, etc. The participants pay for shipping to the next on the list. That way, the manufacturer only has one unit that can be demo’d by a larger number of potential buyers. That I would do in a heartbeat.

I never thought I would spend so much on a streamer/DAC, but after I heard the VEGA G2 in my system, I had no hesitation dishing out the $5700. The same could happen with a LEO GX, but I would have to be majorly impressed with the improvement it offered for another $6900!!

I have been demoing the Leo GX for a couple weeks now (I was one of the first Vega G2 owner in NA, and do early adoption with Xuanqian on occasion).

I have decided to take the plunge and purchase it. It brings the already insane sounding Vega G2 to the next level…and then some. 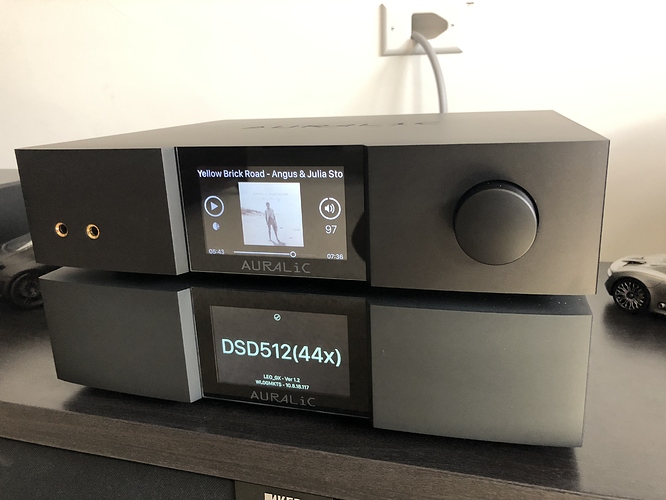 can one turn the display off?

those few characters end up being way too large and just distracting (to me. and I do wear glasses)

can one turn the display off?

those few characters end up being way too large and just distracting (to me. and I do wear glasses)

I’m certain that you can on all G2 devices. I have the Aries G2 and there are several settings to be done when it comes to the display — such as brightness and whether it should be on or not.

June 2018 I said I was jealous. Not anymore, I’m taking the plunge and buying one next month

My DAC currently is a a Chord Qutest. What the general idea on the most important part, the streamer or the DAC?

I’ve read users like @Quaerit has a Dave which is considerably more than the G2 and that fits in my mind,. Does anyone think a G2 is wasted on a Qutest?

My DAC currently is a a Chord Qutest. What the general idea on the most important part, the streamer or the DAC?

Definately DAC in my opinion.