Currently, Roon handles multi disc albums by separating the discs to show up as separate albums in album view. The workaround to fix this is by manually going through each multi disc album and using the merge album’s feature. What I would like to see is an option in settings that does this process automatically for the user, because as someone who has a large library of music it is a very tedious process. Sometimes when I end up merging the two discs, they don’t even display in the correct order with disc 2 appearing above disc 1.

I have tried many music players for macos and Roon seems to be the best option. Currently I actually run foobar2000 in a vm because I’ve found the options for macos to always be missing at least a couple things that are important. It’d be really nice to have this feature which would make me use Roon most of the time rather than running foobar in my vm.

Select all the albums and merge should work

I don’t see any options to merge when selecting all the albums. Once I select all of my albums in album view there’s no option to merge albums in the album editor window.

FAQ: How can I ensure multi disc sets and box sets are identified properly? additionally Merge Albums and Fix Track Grouping if needed.

Currently, Roon handles multi disc albums by separating the discs to show up as separate albums in album view

Have you studied the docs below? I’ve added several large/complex multi disc albums without having to merge, they were right from the beginning.

Achieving Great Results From File Tagging Roon and file tags Roon has always read a significant amount of information from your file tags. Along with track timings, Roon uses tag information, such as your album and track titles, artist names, unique...

I have read both of these and neither have helped. I think it’s maybe because I have the discs generally separated into folders. Even if that is the case though it should be taking the information from the tags rather than the folder structure, or at least have the option to (I specified roon to prefer embedded tags in settings). Below is an example of my general folder structure for multi disc albums.

All my multidisc albums are seen as such. When ripping are you tagging them correctly to be part of a series. I don’t use folders to separate all in same album folder metadata tags them as disc 1of 2 etc. If it’s a box set then Roon will struggle and will treat them as separate albums users use different methods to get this to work, I don’t bother as I don’t care if it’s a box the individual albums are all I care about I can use Roon tags to group them if I wanted to.

I am tagging them correctly, pretty much all of my albums were just tagged in foobar2000’s built in tag editor. I don’t specifically have a tag to show that they’re apart of a series because generally they are just a single album, nor do I know a standard id3 tag for that.

There is a standard tag for this. When I rip using dbpoweramp or eac or just tagging in mp3tag disc is a tag your fill in or is auto filler by the ripping software when it ids them or you just add it if I doesn’t.

You can merge albums to form a multidisc set in the editor and set which tracks belong to which disc. I have had to do this to a few rare compilations Roon failure to identify.

In short, depending on the " Show Hidden Tracks And Albums" setting only the primary version is shown or they all appear as separate albums.

This will import as a “big” album/Box with each Disc identified in the dropdown in the Album View. Drop “All Discs” 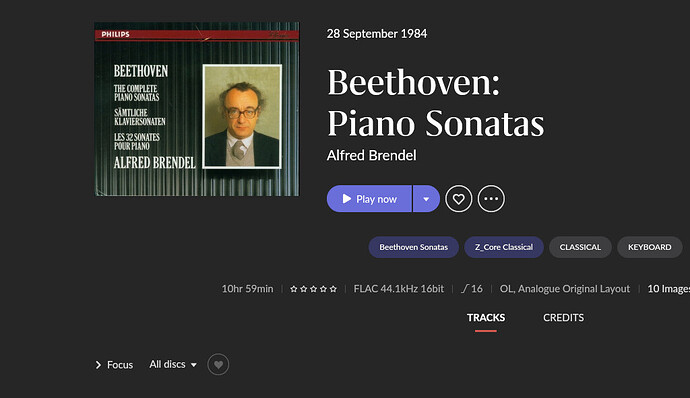 Anything after the folder name CD01 etc will be treated as a separate album and Roon will try to (and often NOT succeed) in Identifying this . I am not even sure Roon recognizes Disc as opposed to CD 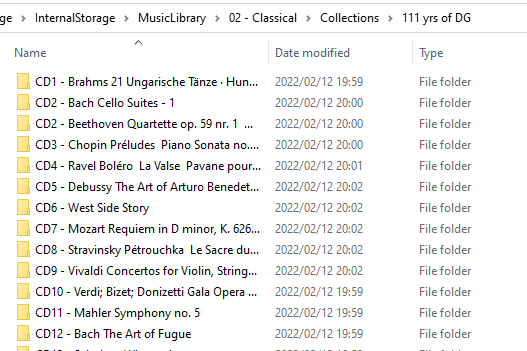 The best advise is if the box is a “genuine” box as in my top example then leave it alone. If you can be absolutely sure that the individual discs are self contained albums then you can take option 2

Beware , because the record labels are trying to be nice to you , they take old vinyl releases (40-45 mins) and put them on CD but add a few extra tracks to pad out the 75 mins. In these cases Roon will almost certainly fail to ID.

anything in Square or normal Brackets after an Album Name is treated as the Album VERSION , in this case you would get one Captain and Me and a Version tab.

I can’t just find an example to show you.

BTW there has been a long time feature request to allow a box st structure with individual CD’s showing their original artwork . Alas no progress

BTW2 to group albums as a “box” you can create a custom tag [Box Set]. MP3Tag and JRiver support custom tags for sure

Oh huh, I just tried running the group alternate versions on an album and it is pretty cool. I still do have some albums that are genuinely multi disc box sets that do not show up properly as one album.

read above , you are probably breaking one of these rules

Oh gotcha. I do wish that Roon didn’t rely so much on having an exact folder structure because I don’t think it should need to have that to properly fetch and match id3 tags, but at least there is a workaround for this. I don’t really want to go through my entire library and change the folder structure but I guess maybe I’ll just have to do it if I want Roon haha.

Fortunately mine was in that structure when I started with Roon 6 years back . It may be a chore but the Versions feature of Roon where one album displayed can have many versions is a real advantage if you are into multi versions.

Maybe try a couple of examples and see what you get and see if its worth the effort. Always keep the Album Name “clean” ie The Captain and Me with no extras , that will help too.

Great Album BTW , I had in in vinyl when it came out and Jon Peel was raving about it !! Yes I am that old

Oh yeah definitely, I have a lot of music in surround sound and other versions throughout my library and I was actually really impressed with the multi version feature when I just tried it. I might just grind through my library because I’ve been meaning to get a more standard folder structure for a while now anyways.

Thanks! While I wasn’t around when that album came out it still gets tons of spins from me regardless! Truly a classic haha.

A good example of versions 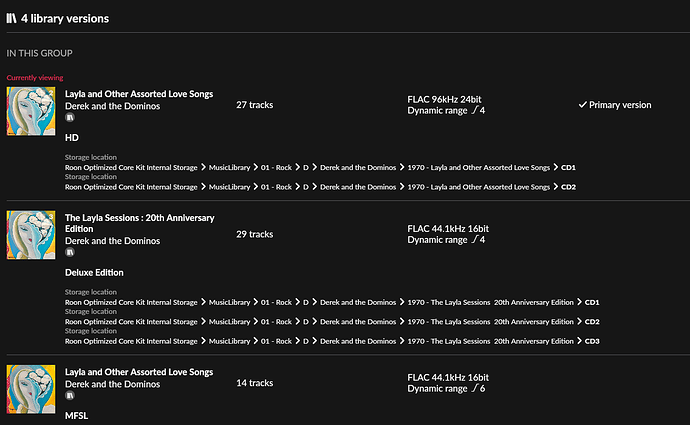 Oh gotcha, I’ll experiment with file paths and probably end up with something like that.