Automatically announce/display each song while playing an album?

When I’m cooking or doing the dishes, I can’t look at my phone to see the name of each song that is being played. Could Roon announce each song or movement by feeding the text to a text to speech engine? The option could be turned on or off in settings.

If not that, how hard would it be to build a little scrolling display that would display the song on a cheap LED panel? I could put one of those on top of my ELAC Discovery Z3 or on top of my stereo.

The new Google Home Hub @ $149 ( recently on sale at Best Buy in the US for $89 ) should be able to show you album cover, title and artist plus scrolling lyrics for tracks that have lyrics on its 7 inch screen once the Roon teams works out a few kinks. A Raspberry Pi running Ropieee with a 7 inch Raspberry touch screen can show you artist, album and title plus has controls to start and stop play for around $200 and can be configured to drive speakers as well for not much more money.

I’m sure there are other options but those are the two I have.

Thanks for those options. If I can’t have voice telling me the track, I might as well carry my iPad into the kitchen and prop it up on top of the ELAC, like this: 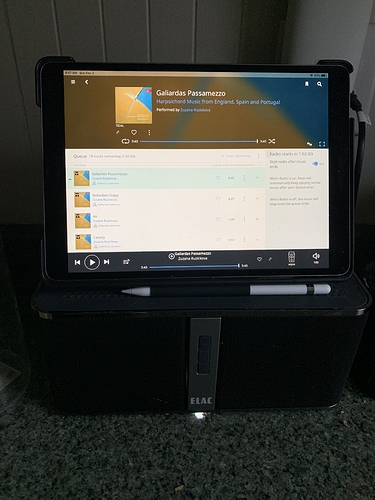 Hi Tim
Would ropieee display what another end point is playing? For example, I have a usbridge hided in my hifi cupbaord, can ropieee display on the 7 inch screen what s been played on the usbridge?
Cheers

Yes, you just configure the Zone you want to use and it controls and displays the information for it.

It also supports some remote controls including the FLIRC I think although I don’t use any at the moment.

Check out the RoPieee web site for the latest information.

One thing I noticed is that there doesn’t seem to be a good view for listening to a classical album which has parts. One view shows all of the movements but it does not scroll as you play the recording. The other view shows “3 parts” but does not show what they are. Am I missing something?

Could Roon announce each song or movement by feeding the text to a text to speech engine?

How about Bob Dylan’s voice? He had a hit radio show called Theme Time Radio. He didn’t play any of his own music and told a back story about the music he played.

I’ll take any voice so that I don’t have to try to peer at the screen from across the room.