Band called the The Magnetic Band not recognised

Neither of their 2 albums nor the band itself are recognised in Roon. This is the Discogs entry: I would assume this is a special audiophile feature to avoid any influence the EMR contamination by ‘The Magnetic Band’ could have on the sound quality of your system.

But I expect it is because Allmusic or similar don’t do so well on Spanish bands.

Allmusic lists Magnetic Band, but it is a different band.

I don’t have these bands in my library, but Qobuz lists them through Roon. Are these the bands you’re referring to? 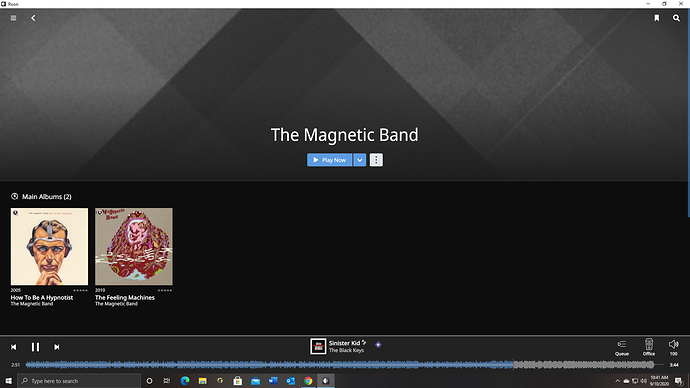 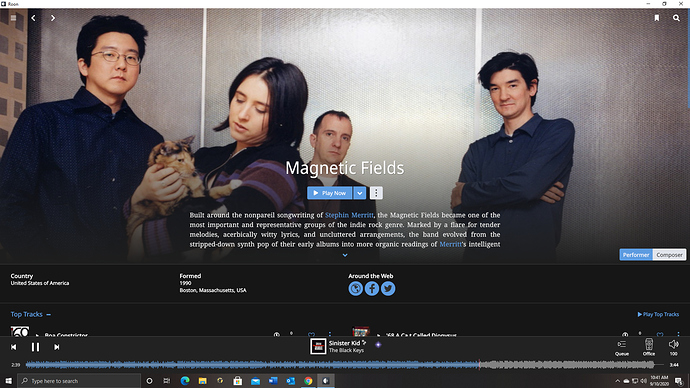 If they are, seems like Roon is handling them correctly.

The top image is correct, the lower image is for somebody else.

I get the same screen as the upper image but the albums remain unidentified and there is no band information.

the lower image is for somebody else

Well, yes, but it is the band referenced in the thread title… is that not what you meant?

Well, no. The lower image says that it is for an entirely unrelated and much more famous band called the Magnetic Fields, whereas the upper image is, correctly, referring to the Magnetic Band.

Roon does correctly identify a Magnetic Fields album which I have in my library, and has an artist bio for them as well.

The lower image also has a different set of faces to those in the photo on Discogs, and I assume Discogs is correct.

I know nothing myself about the Magnetic Band, only that Roon is unable to identify the albums or give any information about the band.

Apparently this is because Roon’s metadata providers don’t provide any metadata for the Magnetic Band. I observe that in the upper of your 2 images, The Magnetic Band is in white letters, whereas it would be in blue letters if it was linked to an artist bio.

So I just thought I would draw this to Roon’s attention so they can then do whatever it is that they do in these situations.

@Simon_Chick I’m sure that support will be along later. Can you verify that your thread title is incorrect?

Wow, no wonder I was causing confusion. Doh!

The thread title is totally wrong, and should say The Magnetic BAND not recognised.

Apologies to all concerned.

If you can edit it to amend the error, please do so.

These are the results when I searched for Magnetic Band and Magnetic Fields. They were reported correctly by Roon and are not conflated as you seem to imply. What am I missing here? As per your original post, the Magnetic Band is recognized by Roon, there’s just no biography because it appears the band is relatively obscure.

Frankly I don’t know. The Magnetic Band only seems to appear as an artist because Roon is reading the file metadata. Neither of their (only 2) albums is recognised, so I rather doubt Roon is recognising the artist either. But as I say, in truth I don’t know.

It looks like our metadata providers just don’t have data on these albums / this artist currently. New data is always being added, so it is always possible that we will be able to identify these albums in the future.

Understood. My purpose was just to notify you so you could point out this omission to your metadata providers.