I’m struggling to understand how Roon orders albums. For example I have rolling stones albums on the decca label that i want to see first. I also have the same albums on the London label and I call the artist Rolling Stones - London or Rolling Stones (London). I want these to appear after the albums labelled simply “Rolling Stones” but Roomie seems to want to put the albums with the qualifier first with the rolling stones. with other artists the behaviour is the opposite - artist name with qualifier is ordered after. I can’t understand the logic or methodology being applied. What do i need to do to get the desired result - artist name followed by qualifier comes after albums with only artist name.

I think the sensible approach is to have a single artist and then identify each release under that artist using the label and catalogue number. This information may be displayed on the Album cover. In addition you can use focus to filter by artist and label.

Each view can then be saved as a bookmark.

Under Settings - General, I set the album sort to Original Release Date and the albums appear in Release Order:

For Compilations, I saw a post where someone suggested sorting by Various artist, but I want all my similar compilations to be grouped together, so what I do is a) Tag all Compilations and then b) tag them by group such as my Uncut Magazine Sampler CDs: 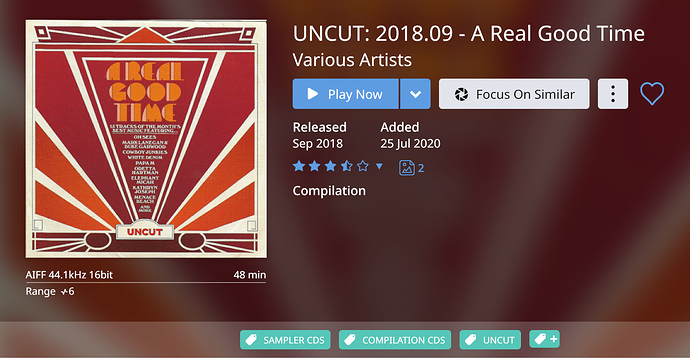 I think trying to organize the way you have described is going to be problematic for Roon. It simply isn’t designed to have two names for the same artist. I think Martin has the right idea. Use the focus function to view the albums based on the data you prefer then bookmark that view for future use.

Has Roon recognized your 2 “Artists” ? Normally Roon “uses its own !!” and ignores your tags

Likely it will have Identified the Album and downloaded from its own Metadata source the Artist ie The Rolling Stones . You will have to go into each album delete The Rolling Stones as a credit and Edit to your name version. You should be able to do this en mass by selecting all the albums you wish to edit

Thanks everybody for your input and suggestions.

On the compilations question, focus is a great tip but it’s actually clunky compared to how iTunes/apple music did it. There, various artist compilations are ordered at the end of single artist albums and then ordered by title. I do think this is better than ordering them as various artists and then not ordering them by title as Roon does. There’s no obvious logic to logic to how Roon is organising these - i’m guessing it’s something like first artist in the compilation but just seems like this would be an easy thing for Roon to improve

Another thing i’ve found is if you have multiple volumes of a title ending in the volume number so for example pebbles 1, pebbles 2, pebbles 10, pebbles 11, roon puts pebbles 10 and 11 before 2. Agains seems like something that would be easy to fix; otherwise presumably need to label them pebbles 01, etc to make it organise logically.

Have you seen in settings>General at the bottom 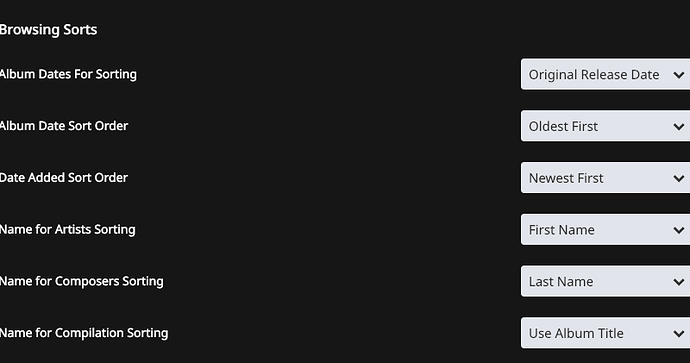 Yes I have thanks but the thing is that then seems to result in all the compilations being interspersed among other albums when I sort by artist.

What I would want is to sort albums by artist, all various artists comps to be grouped together, ideally at the end of the single artists and then ordered by title. That’s what iTunes/Apple Music does and it just makes more sense than what Roon presently does. Don’t get me wrong i like Roon. I subscribed about 8 months ago but i’m just getting serious about migrating from iTunes and starting to try to better understand the functionality.

I forgot to mention, when I order my Compilations, using TAGs, if you start from the main Roon menu, choose Albums, then hit the / key and start typing, as my screen shot above show, I got all my UNCUT albums in one screen, the RED is what I typed in, but I was able to stop after typing UN, so it’s really quick and easy to find and view albums as groups. I then edited each album name as shown with the release Date/Mo. I have hundreds of compilations and do the same, so they all show up. Here’s my MOJO compilations: 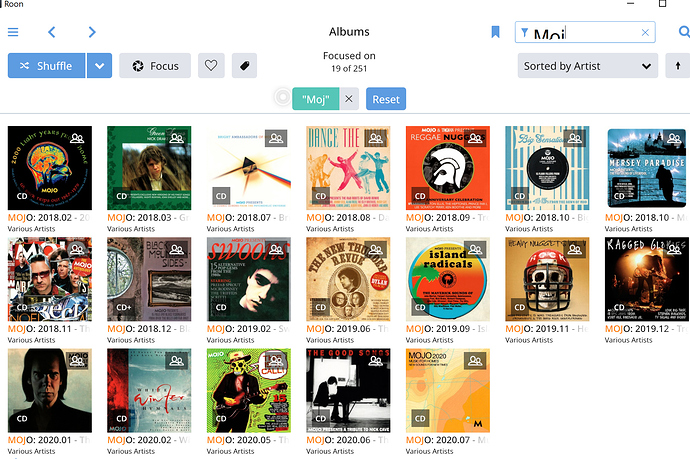 Coming back to this issue of ordering of albums in Roon. The system has a strong bias to sort by release date for any given artist. That’s not all bad, in fact is maybe even good once i’ve gotten used to it… except for various artists compilations. These can often be part of a series and you really want to sort by title alphabetically for them as a default regardless how albums sort for an artist. As it stands, i have various artist albums that are part of series spread all over the place within various artists albums i’ve bookmarked which is just not good

It appears to me the fix for this would be to have a default sort by title or separate selection of how to sort for various artist albums. If there is a way to do this in Roon today, I’ll be happy to hear about but otherwise would like to request the Roon team consider improving the functionality for various artist album sorting as described.

I too would like to change the default sort order, I don’t know why it can’t remember your choice and then use that choice for ever until you change it. But for now you can easily get what you want, in the example I showed you above, if you do a search, find the albums you want, sort them the way you want, then hit the Bookmark icon on the top and save it, it will always come up the way you want sorted the way you like.

It appears to me the fix for this would be to have a default sort by title or separate selection of how to sort for various artist albums.

Use Focus and Bookmarks …

Thanks, didnt realize you could change sort with a bookmark
That’s good althouGh still think there should be a default Sort selection for various artists and they should all show up at end of albums - yes like itunes!

another organization question … is there a way to list all albums roon has not identified?

is there a way to list all albums roon has not identified?

Yes!
From Album view, Select Focus, then Inspector and check “Identified” it will come up as a green filter. Click the green Identified filter again and it will turn red, indicating it is showing you albums NOT identified.

Thanks, didnt realize you could change sort with a bookmark

This is a feature of Focus. Bookmarks are used to save a particular filter or selection.