Beethoven given as composer for Rachmaninov's Sonata for Cello & Piano in G Minor, Track 3, Disc 1, "Concert of the Century"

Beethoven is identified as a composer in the referenced track (see also below). I cannot find any online reference that says Beethoven had something to do with the Andante movement. 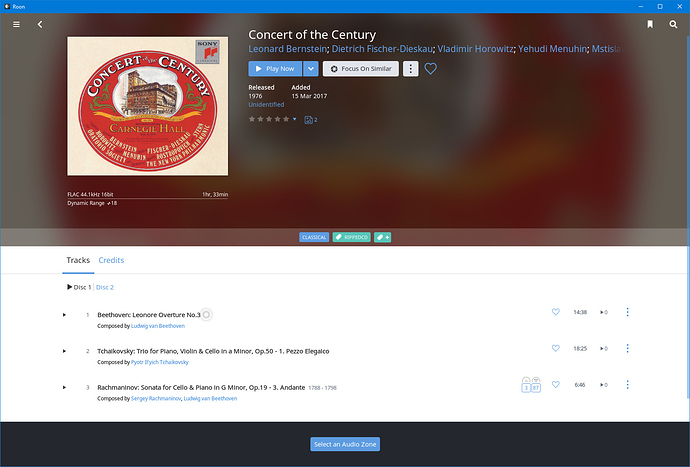 Hi James, your screenshot shows that this album is unidentified.

Hmm… Didn’t notice that. Now I find that https://www.allmusic.com/album/release/concert-of-the-century-celebrating-the-85th-anniversary-of-carnegie-hall-mr0002650630 and https://www.discogs.com/Bernstein-Fischer-Dieskau-Horowitz-Menuhin-Rostropovich-Stern-Oratorio-Society-Members-Of-The-New-Yo/release/8217290 seem to match my 2-CD album closely. So why doesn’t Roon make an identification?

I did “Identify Album,” got 5 possible matches, none of which looked right. So I clicked on “None of these look right,” entered Leonard Bernstein as Artist and “Concert of the Century: Celebrating the 85th Anniversary of Carnegie Hall” as Album, clicked Search (leaving No for Use File Tag Info). The first hit looked likely, so I clicked on it, got “Let’s make sure everything is in order.” the first 3 tracks matched, but 21 tracks (which number happens to be the number of tracks on Disc 2) did not match. I’m not sure what to do. I could move things around, but I don’t really understand. It seems Roon is objecting to the entire content of Disc 2.

Below are 2 screenshots, the first being the top of the tracks, the second being the place where the first 3 “bad” tracks are given. (Note that on the left, only Disc 1 is shown, so Roon thinks that this is a one-disc set?) Any ideas about what to do here? 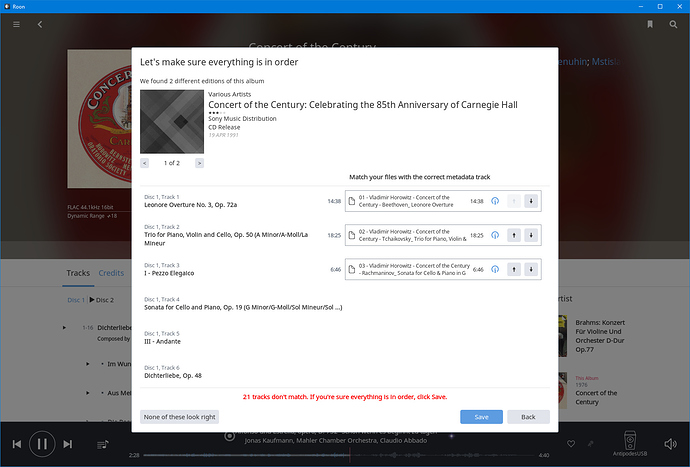 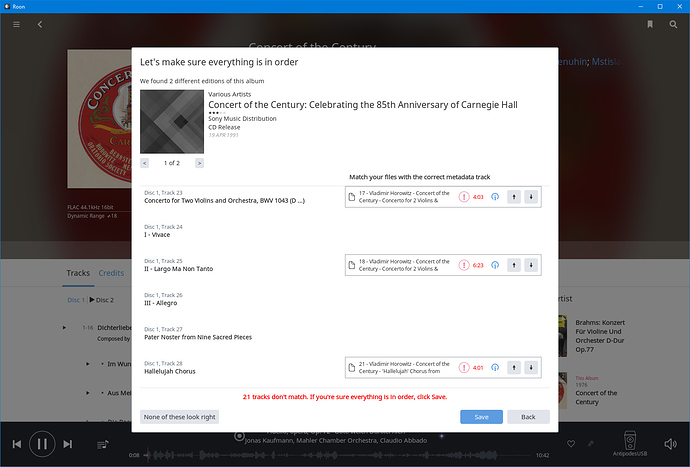 So why doesn’t Roon make an identification?

The first hit looked likely, so I clicked on it, got “Let’s make sure everything is in order.” the first 3 tracks matched, but 21 tracks (which number happens to be the number of tracks on Disc 2) did not match. I’m not sure what to do.

Have you tried edition 2 of 2 in the identification “Let’s make sure if everything is in order” page. There are two releases, one with 1 disc and 28 tracks (which you have posted the screenshot of) and one with 2 discs and 24 tracks, which is I think the one you want (and which fortuitously has much better metadata).

2 of 2 has no track times so all 24 won’t match, but if the track titles look correct, then go for it.

I accepted 2 of 2. A good deal of more information (eg, live recording on 18 May 1976). The misattribution of disc 1, track 3 to Beethoven is gone. “Performed by” is much more detailed. In fact, everything I looked at is correct.

I’m not sure what lessons I can draw from all this, except to beware “unidentified.”

Did you know that you can focus on unidentified albums? 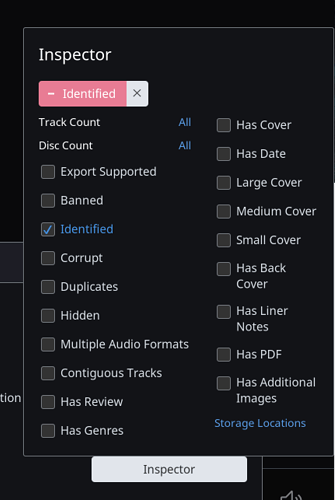 Hit the Focus button, then the Inspector button at the bottom right. Check Identified, then click on the green Identified tag to reverse it (it turns red).

Wow. Over a tenth of my albums are unidentified. Work to do…

Hmm … Some of these (like Adams’ “Gospel According to the Other Mary”) would seem easily identified. What am I missing? 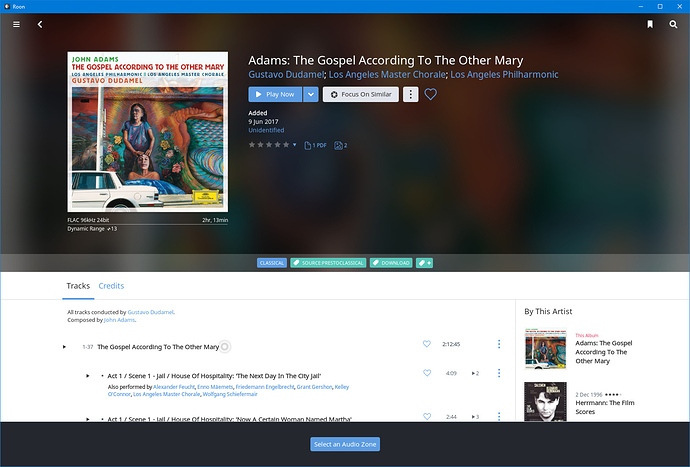 Just tried identification, chose 2 or 2 (download), even though I was warned all 37 tracks didn’t match. But the track times for the first 2 (all that I checked) were right, so I accepted. Things look good.

What’s causing Roon to think that in this download case, there is a mismatch on track times?

Strange, there is no track level metadata for the 2 of 2; I would have gone for 1 of 2…

I chose 2 of 2 because it was described as “download,” which is the way I got the recording.

Understood, but you should learn to recognize trackless metadata in the identification wizard. On the left hand side, if all of the tracks have boxes for Disc, Track, and Title, it’s trackless metadata and Roon will fall back to your file tags for everything track and composition related.