I am travelling away from home a lot at the moment, so I have loaded up a small subset of my library onto a work lap top. Mostly l am just carrying around a single performance of favorite works. From a metadata perspective it is completely random which version I have chosen. It has nothing to do with the “completeness” of the tags. just which version I prefer.

But what I am noticing is that roon is now not recognising many compositions in this smaller library. There are a lot of second hand CD shops where I am at the moment so I found a Bruckner 4 version with Gunter Wand / Berliner Philharmoniker I didn’t have at home. When I ripped it I got the catalogue WAB no. so roon recognised it. The version I was carrying round didn’t have the catalogue WAB no. so it was not recognised as a composition. I only noticed it when I realised I wasn’t seeing two versions of the composition which I knew for certain I had.

A quick look around my library it seems to have been a general problem I can put this way. Once I have several versions of a composition in my library, there is a good chance roon will pick up one of them and then I just merge the compositions that were not picked up to the most comprehensive one.

But in this scenario where I might have only one or two versions and in effect I have to “bootstrap” roon, how do I know what format the title should be in so that roon picks it up? Is there best practice? Do I really need to hunt down the catalogue numbers?

If you want it to be automatic, best practice is to use the composition titles you find at www.allmusic.com (taken from TiVo, Roon’s primary source) and that will include the relevant catalogue number, and the matching text. Once you get used to doing this it’s easy, and saves acres of time later on.

If you don’t want to do that, you can always just merge the compositions in Bruckner’s wordlist, making the one with the catalogue number (and perhaps a description or other metadata) primary.

It depends how much material you have and how perfect you want your library to be, which is the easiest or better route.

Thanks @ludwig. I already tried that but with this particular album roon does identify at an album level but it refuses to do so at a composition level even when I cut and paste the catalogue numbers from allmusic. But then I realised it’s a box set (Wand/NDR) and maybe that has something to do with it. I ran a few tests with other stuff and you are right mostly roon picks it up if there is a match with allmusic.

Very frustrating though. I am actually maintaining two libraries. One at home and a much smaller travel one. I hadn’t intended maintaining the travel one at all. It’s just for background radio often listening over hotel room speakers. But that’s the problem. I was quite disappointed with radio (maybe 750 albums or so is not enough, variety is too broad?), so I took a closer look and could see that although album identification rates were quite high, with classical there are lots of identification gaps at a composition level and with pop/jazz it’s worse, mostly because so few composer fields are populated. Genres seemed to quite hit and miss as well.

The metadata and library structure is actually not that important to me in this scenario but the radio is. I assume there is not much I can do to improve that except clean up the tags?

Thanks @ludwig. I already tried that but with this particular album roon does identify at an album level but it refuses to do so at a composition level even when I cut and paste the catalogue numbers from allmusic. But then I realised it’s a box set (Wand/NDR) and maybe that has something to do with it. I ran a few tests with other stuff and you are right mostly roon picks it up if there is a match with allmusic.

The failure to identify at a composition level is fundamentally down to an identification with poor track metadata. Have you tried reidentifying and finding a better candidate?

Failing that, and assuming this is the only metadata available, which “that” did you try?

If you mean you changed the file tags to match Allmusic, that will have no effect on Roon in this case because once it has identified the album, it uses the identification unless you edit within Roon. You would need to back out of the identification of the album and fall back on file tags, which would then give you the catalogue number sort.

Unfortunately, editing the catalogue number in(to) the track title of an identified album also does not work due to some technical loopholes.

So your options are (1) reidentify for better metadata or (2) go unidentified and put the catalogue numbers in your file tags.

No idea about getting radio better, sorry.

I have tried both a manual re-identification and going unidentified. This is usually the first thing I do. In both cases there is no identification at the composition level. To be honest I wasn’t surprised by that. It is a Japanese box set import of the Bruckner Symphonies 3-9 (Wand/NDR). An RCA Red Seal re-issue for the Japanese market as far as I can see. I often have problems with box sets especially more specialist ones. I am not obsessive with tagging but mostly I am using FreeDB and/or GD3 as a baseline with EAC or CUETools and tidy up any obvious/gaps mistakes from the back of the CD or allmusic, discogs, arkivmusic etc. There were no obvious gaps except the catalogue numbers in this case but I would never go as far as checking discid’s barcodes etc. so unless FreeDB, GD3 or roon puts them there, I certainly wouldn’t.

Having said that. By coincidence I have a rip of the DG (Jochim/BPO) Bruckner Symphonies also lying around on my work laptop which I hadn’t got around to deleting (my idea was to have just one version of favorites on the laptop for travel). Roon identifies that one no problems at both the album and composition level. As it happens I was able to merge the unidentified Wand/NDR symphonies into the identified Jochim/BPO symphonies and then delete the Jochim/BPO box set. In that scenario the identification of the Wand/NDR compositions seems to remain “sticky”. Weird but it’s not really a viable general solution.

I had only noticed this before that roon can identify at the album level and not the composition level with pop/jazz. But it had not occurred to be that exactly the same thing could happen with classical. My understanding is that in this case, from a roon perspective, the composition is just a meaningless string of characters that roon can then use in only a very basic way, the same as other players. For example, the composition is essentially blind to radio, discovery, search, the hyperlinking etc. This was hidden to me before because at home I have multiple performances of most things so roon will usually identify at least one and then I was in the habit of merging all the other unidentified ones as in the example here with Bruckner.

So now I have started looking more closely at this little travel library on my laptop and I discover the scenario of roon identifying the album but not the compositions is much more frequent than I would like. Here is another Elliott Carter example. Roon finds two candidates. It’s the same result with either. There isn’t very much on allmusic and I couldn’t find any opus or catalogue numbers but I am no expert. 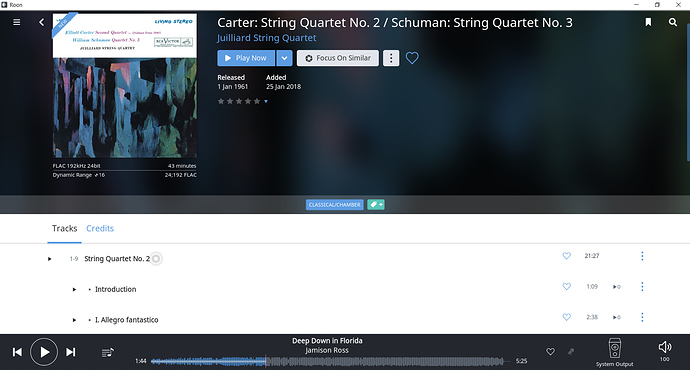 Here is another Verdi example. As far as i know Verdi has no opus numbers. Are there any catalogue numbers? Again I am no expert: There is no better fit, except this disc has additional Choruses not on the disc roon is using. 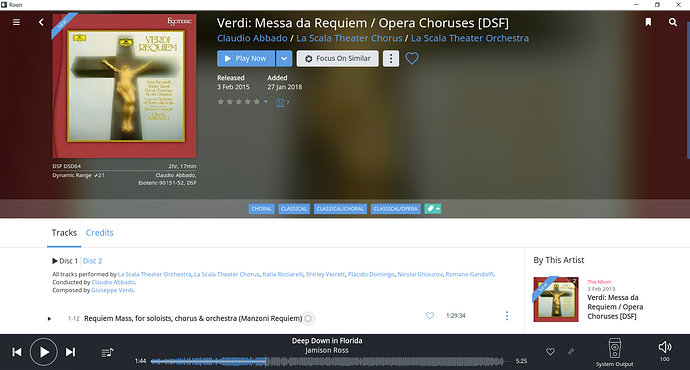 Is there anyway I can focus on all identified albums that have unidentified compositions? I would like to look at this more systematically to see if there are patterns. Maybe it’s box sets and/or more specialist recordings or more modern composers with no opus or catalogue numbers. Maybe it’s something else. Either way it must be the case that a lot of roon functionality is lost if the composition isn’t identified? In this scenario it is less a concern with presentation and multi part sorting (although that’s a concern at home). It’s more the knock on effects on the casual listening experience. Especially with radio.