This CD has works by 3 composers. For some reason, Roon doesn’t know that the Cello Concerto in E minor (tracks 6-8) is by Aram Khachaturian.

This is a local library album for me. I’m not sure why Roon doesn’t pick up the composer from the in-file tag.

Oh – I just noticed that the final movement of the OTHER cello concerto on the disc (the one by Kabalevsky) is erroneously separated from the other parts of the work.

P.S. I was going to report the “Product Code” listed by Roon, but since that can’t be copied and pasted, I figured you don’t want or need it.

A screen shot of the album details page would be interesting. 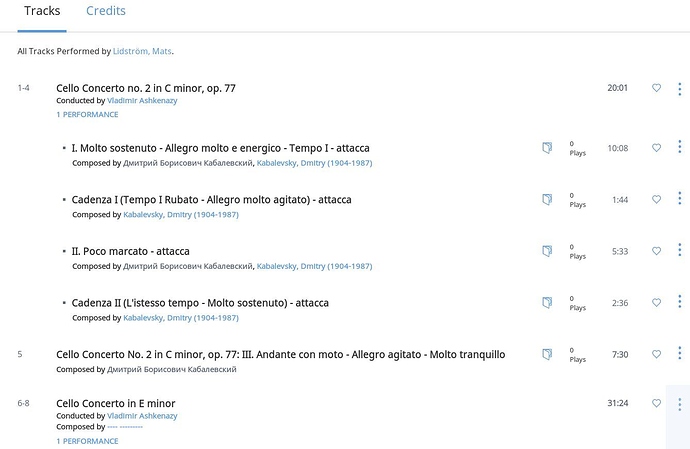 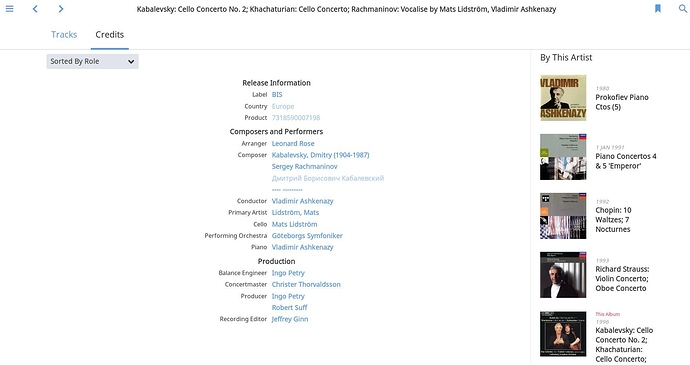 I see two potential problems in your screen shot.

These are only suspicions - it’s hard to tell for sure. Let us know how you get on.

The Cloud metadata look good for this album and the track timings for tracks 1-5 are second-accurate. There are definitely some user file tags in there and it could be an inconsistency in them which is causing this bad layout.

@Mike-48 It would be instructive to get hold of your un-altered files. If you are amenable to this @eric or @mike can assist in the upload.

Thanks for uploading your media and your patience. The short of it is that Roon’s album identifier latched on to metadata for a particular edition of this album which doesn’t have the detailed composition or performance information. [There’s actually contradictory information in your tags – not your fault – which isn’t helping us identify the precise release, but we should be doing better here.]

Your best (and conveniently easiest) option is to:

You should now have excellent metadata for this album.

[This album turns out to be a superb test case for a whole number of metadata issues, but I’ll not bore you with the gory details. Suffice to say that we are looking to improve both automatic identification and the quality of the metadata when you don’t get the best match. Oh, and cadenzas are horrid, because the pedantically correct thing to do with them is not to attribute the composer of the classical work to those tracks… You’ve managed to stumble on two out of only nine cadenzas in our entire database which have no composer information and no performance information!]

Thank you, @joel, for the tip on how to resolve this, and I’m glad if it gives you a good test case.

When you say that there’s contradictory information in my tags, do you mean incorrect information, or just that the choices I made for assigning fields like artist and album artist are not the same those as used by Roon? (My own tagging scheme antedates Roon’s existence by several years, I believe.)