We matched volume level and combined both players into Roon so the music was synced.

Outcome we could not tell the difference which player was playing. Everything was blocked of so we could not see lights on the players or preamp switching inputs. 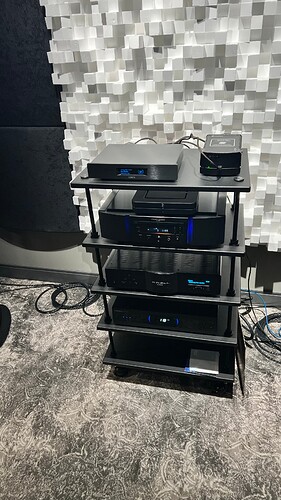 Please try enabling Volume Control in D2, turn it way down, then enable Theater Mode in the Krell for the D2. See if sounds better.

I tried everything with D2 I enabled and disabled LEEDH made no sonic difference.

I’m in Canada so the price difference is about $3000 between the two units.

I was not impressed with my LUMIN.

How much do you need to spend on a streamer to hear a big difference in the digital domain without needing to tweak settings to hear a difference.

Good to see some love for the Node. I think it is often mistakenly maligned when compared to more expensive streamers. Price doesn’t always equal quality. Though you may get some grief from Lumin fans. I find Roon produces better SQ from the Node than BluOS does.

I was a LUMIN fan till yesterday.

Well, there’s been so much written about “digital is digital”… I don’t know what differences you can expect to hear with a bit perfect reproduction? If the bits are the same, they have to sound the same.

How much do you need to spend on a streamer to hear a big difference in the digital domain without needing to tweak settings to hear a difference.

I think you already know the answer to that question. Once you are at a competent level of engineering, they are all the same (disregarding features, but with Roon in use even that goes away).

Amir from ASR trashed the Node 2i, until he connected the coax digital out it to his favorite DAC (Topping) and then measured that the DAC produced the same result as with any other digital input.

I’m interested in this as I have a D2 with SBooster and previously had a Node 2 (as well as some other DACs). It’s obviously a helpful test, as it appears to demonstrate in that environment and with that equipment, that there is no audible advantage to the D2.

However, I’m curious as to whether there were any other DACs tested in the same session? Without some sort of control condition, we don’t know whether it’s the environment/equipment masking any potentially audible differences, or whether there’s indeed none there.

I’m keeping an open mind here, as, for example, I have been very impressed by my recent purchase of an RME ADI-2 DAC FS and have been meaning to try a comparison with my D2 at some point. That said, you’d have to pay me to purchase another piece of Bluesound equipment…but that’s a bit of a tangent to the discussion.

We did compare the D2 to the Cd player. Test Track was private investigations (Dire Straits)

The CD player price tag of $5200 Canadian was a clear winner.

That’s certainly interesting but I guess difficult to infer anything from with regards to the DACs.

The reason for me doing this test, Lumin D2 costs $3000 CAD the Node costs $600. if 5 people in a room cant tell the difference in sound between the 2 Dacs with massive price differences, what exactly makes a DAC Cost 5X more?

The Node is made in China owned by an American company.

The Lumin is made in China owned by a Chinese company

It’s hard to dispute what @Gary_Foux and his friends heard. After all, they know what they heard! I owned a previous iteration of the BlueSound Node and currently own a Lumin T2. I can say that when I owned the Node, I quite appreciated it in a mid-level system. Once I moved up the food chain to a more highly resolved system, though, I believe my Lumin performs better (T2 vs the tested D2). I think what is missing in this thread is recognition that “a single component of truly higher resolution can only show off its true advantage when the rest is fully transparent to it.” That quote comes from Srajan Ebaen of 6 Moons in his recent review of the Dutch Pasithea DAC (link here if of interest.)

A few other points: 1) the entire Lumin line offers Leedh Processing, a superior form of digital volume control, which Lumin provided via a firmware update. It’s a terrific value IMHO and the fact that it was offered free is a real plus. 2) I think the BlueSound Node punches way above its weight and is a great option for many people.

I came to the same conclusion when compared the NODE (2021) with Topping D90SE fed via Coax out from the NODE. To my ears they sound the same with my Revels M126Be speakers. Now, I also did a blind test comparing the NODE with my MA X-SABRE 3 and 8 out 10 times, I got the impression that the X-SABRE 3 sounded better than the NODE. With headphones (DCA AEON 2 Noire) the X-SABRE 3 sounds always better than the NODE feeding a Topping A90 amp.

Bits may be Bits, but the timing of the bits and the analog section of the DAC (among other things) will make a difference in sound quality.

Bits equal Bits is not the whole story

I’m sorry Stephen, but this bits are not just bits argument only exists in the audio world. We’ll have to agree to differ. And there’s already so much written on this, there’s no point it rehashing it all again.

That’s fascinating! I suppose the natural progression would be to test the Raspberry Pi (with Hat) against Bluesound Node. It’ll be fantastic for someone like me - in whose case even the cost of a Bluesound Node is a bit dear. Knowing that a RasPi - more my budget - sounds no different than a Bluesound Node and by inference a Lumin D2 would really be something. Thanks for the consumer advice guys but my plea is not to stop at the Bluesound Node - think of us the (even more) common man.

If it sounds good to you accept it and move on. If you ask a hundred people here their opinion you will get a hundred different answers.

It’s safe to say that bits are just bits in the streaming portion of the device (insofar as the file source remains the same). The DACs are different, however, but many recent DACs all are about the same rendering the bits to analog with sufficient accuracy that variations are not within the range of human hearing. The original Node tested (ASR) slightly above the 86 dB SINAD that the company still specs for the current release version. 86dB is not current state-of-the-art but the sound quality differences with, say, 110dB would be hard to distinguish.

As much as anything it shows how good the equipment is getting!