I have a number of Bluesound players - Node 2, Soundbar, Mini, 2 x Flex. (Also a couple of Raspberry Pi’s running RoonBridge.)

I’m finding that anything playing to Pulse Mini, Pulse Soundbar or Pulse Flex is converted to 48KHz - but this does not happen when playing to Node 2.

If I play to the Node 2 (and look at the signal path in Roon) then it plays at the sample rate of the source i.e. no conversion.

If, however, I play to any of the other players then the signal path shows conversion to 48KHz whatever the sample rate of the source.

Is this because the Bluesound players are not certified i.e. will it be solved when Roon 1.3 is released?

for Pulse Mini, Pulse Flax and Pulse Soundbar - but NOT for Node 2.

So, for some reason, looks like Bluesound is forcing sample rate conversion for speakers but not for Node 2?

I was very confused with this last night on my pulse mini glad to see it seems to be across the board. CD files converting to 48khz and remaining as 16 bit.

Thx. For the reply and the analytics. Wenn will see if Bluesound/ Roon will Change These settings.

Had this reply from Bluesound support:

If your Bluesound Players are functioning properly in the BluOS controller(with sources besides Roon) and this is only occurring with Roon, we would suggest contacting Roon support regarding this issue.

Have also noticed that, in Roon audio settings, it is possible to set Max Sample Rate for Node 2 but this option is not available for Pulse Mini, Flex or Soundbar. Presumably this is because of the setting shown in the Bluesound diagnostics (raat only_48000=“1”).

@support any comments, are Roon determining the settings on Bluesound players (raat only_48000=“1”) and, if so, why for speakers and not for Node 2?

Been doing a bit more testing. I have 5 endpoints in total (1 Bluesound Node 2, 3 Bluesound Speakers, 1 RoonBridge).

Looks like having 2 (or more) of the Bluesound speakers grouped together causes Roon playback to drop out.

I’m wondering if the conversion to 48KHz that seems to be forced by playing to a Bluesound speaker (but not Node 2) is causing the problem?

Having bought Bluesound (and sold off Sonos) mainly because of feedback (on Roon forum) that Bluesound would be RAAT but Sonos would not this is obviously an issue for me.

I’ll be watching this thread. I was hoping Bluesound was going to be my whole home solution.

I’m also seeing dropouts to a Flex and resampling but everything seems fine to a Node 2.

Just done some testing with Roon 1.3

Firstly, congratulations to all. I’ve only explored a few of the changes but initial impression is very, very positive. I particularly like the way that your designers have managed to add additional information and links (e.g. the icons showing where there are a number of versions of a track by different artists) - and do this without making the screen feel cluttered. Next step is to explore DSP.

Also, noticed that playing to any of the Bluesound speakers now shows ‘Bit Depth Conversion’ (to 64 bit float). This happens even if I disable the DSP engine.

The log files (diagnostics) from the Bluesound speakers still includes the line which is, I assume, what’s causing Roon to play everything at 48KHz.

Bluesound have said that this is a Roon problem because the speakers group and play correctly using the Bluesound app.

Would appreciate some clarification on this - I spent a significant amount of money on Bluesound kit because I wanted all endpoints to be RAAT (which Sonos would not give me).

I think the devs are having a well deserved kip at the moment. Let’s drop a flag for @brian to let us know what’s happening here.

Thanks - appreciate that devs need some rest (as, I’m sure, do the rest of the team) - look forward to update.

I am, however, puzzled by the line in the Bluesound log. Is this (raat_only_48000) something that is set by Roon

That flag is not set by us (or known to us). The sample rate in Roon is happening because the device is reporting to us that it only supports 48kHz via RAAT, as you noticed in the logs. We would never add extra processing steps for no reason.

If I were in your shoes, I’d put aside the 48k issue until Bluesound is ready to comment, as we’re not in a position to shed light on their choices. We have brought it to them (not their support team), and they will respond when they’re ready.

If I had that grouping issue in front of me, my first step would be to prove that it’s not the network by plugging everything into ethernet temporarily if it isn’t already. Then I’d want to be sure it wasn’t a load problem on the Roon Core–not that I think that’s likely in this case, but it’s a thing to check.

We will be in touch with them about this, too.

Thanks. Confirms what I suspected. Will try later today with everything via ethernet and report back.

I get this also. Not great. 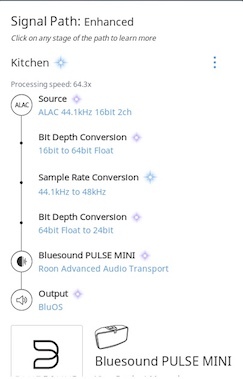 Arahh, this should direct play lossless.

Did you verify that the DSP option for Sample Rate Conversion is either OFF or set to “For Compatibility Only”. Click the 3 button menu to the right of Kitchen, choose DSP Engine to check.

It’s a new setup so al default settings, and setup as you’ve stated:

I commented on this earlier in the thread. This remains the situation for now:

The sample rate conversion in Roon is happening because the device is reporting to us that it only supports 48kHz via RAAT, as you noticed in the logs. We would never add extra processing steps for no reason.

If I were in your shoes, I’d put aside the 48k issue until Bluesound is ready to comment, as we’re not in a position to shed light on their choices. We have brought it to them (not their support team), and they will respond when they’re ready.

Great thread. I have a couple of Pulse 2’s on hold with my local dealer until this is resolved. The only reason to purchase would be to extend my current Roon network to two uncovered areas of my home. Need to be able to add/group with existing RAAT endpoints and due so at native resolutions (up to the limit of the Pulse 2).

All my Bluesound devices have been discovered - but Roon is unstable. The Bluesound devices drop in and out in the Audio Zone and as does the App on my iPad. I rarely have these problems using the BLUOS stand alone App - so it cannot be a network problem. Fortunately, I am still in the trial period for Roon - but I would be more than angry if I had these sorts of problems after paying $499 for this software.