Be uplifted by this that was published on Facebook

It has been a long road but finally The Bonzo Dog Doo-Dah Band have successfully defeated abusive writs issued against them by Anglo Atlantic Media Ltd and Director Robert Kirk Carruthers. The victory follows the band’s success in October of 2019 when the Intellectual Property Office ruled that Anglo Atlantic Media Ltd, with Carruthers’ assistance, had registered the band’s name unlawfully.

The victory, which band members Neil Innes and Martin ‘Sam Spoons’ Ash sadly did not live to see, is also a posthumous victory for founder Bonzo Vivian Stanshall, who passed away in 1995.

Deputy High Court Judge Briggs dismantled the hundreds of pages of irrelevant prolix that Carruthers submitted to the court to substantiate his claim that the band and others had unlawfully conspired to publish malicious falsehoods, misrepresent their right to the name and infringe his trademark. Anglo and Carruthers writs amounted to an attempt to block witnesses statements that had been made as part of the IPO proceedings. In summing up Judge Briggs described the claims as “totally without merit”.

Two writs were pursued against surviving band members Rodney Slater, Roger Ruskin-Spear, “Legs” Larry Smith and Vernon Dudley Bowhay-Nowell. Additionally, the widows of Sam Spoons and Neil Innes and two of the witnesses who gave evidence to the Intellectual Property Office during the Trademark hearing, Richard Allen and Michael Livesley. Neither Mr Livesley or Mr Allen had any stake in the bands name, yet were subjected to the abusive litigation for a period of over two years.

It was only thanks to the assistance of Solicitors Michael Shepherd and Camilla Cokell of Trainer Shepherd Phillips Melins Hayes LLP and the overwhelming generosity of fans who gave money to a crowdfunding campaign that the band were able to see the case to its conclusion.

Judge Briggs noted that Carruthers claims not only sought “to make a collateral attack " on a decision made by the Intellectual Property Office but that they also amounted to “an abuse of process” whilst the claim served against the bands witnesses was an affront to the concept of legal privilege which witnesses enjoy.

Citing completely unreasonable behaviour by Carruthers that went “far beyond the norm” Judge Briggs also awarded indemnity costs in excess of £50K to the band on a summary basis. He will hear a further application to have the costs charged directly to Carruthers in two weeks.

The Judgment was handed own verbally on the 8th of April 2020 but as soon as we have a copy we can publish it will be made available.

“Legs” Larry Smith of the Band noted “the band has suffered monstrous threats, lies and claims that should never have been issued and then allowed to be processed in the first place” whilst Rodney Slater wryly reflected “Victorious and worse off I carry nothing but the scars of two years of tactical, vexatious litigation from legitimately defending what was mine. Don’t try this at home until the law is reformed “. Roger Ruskin Spear added “daft I call it”.

Richard Allen one of the bands witnesses observed “Finding yourself being sued for fabricated nonsense by someone you have never met or spoken to is incredible enough but I find it even more startling that the claims being made against me were based entirely on my witness statement for an IPO hearing. This is a case where someone weaponised the legal system to intimidate a witness with impunity. Nobody protected me and that cannot be right. I am hoping this is now taken further by the authorities”

Michael Livesley added “I’m glad it’s finally all over. This victory is for Neil, Sam and Viv.”

The band with the assistance of Kerry McCarthy MP and The Musicians Union now intend to assist the IPO and Parliament in closing a loophole that allows anyone to appropriate a bands name by paying a £200 fee without having to provide adequate proof of ownership. Similarly, they wish to pursue the issues raised by an attempt to sue witnesses - behaviour that could potentially amount to witness intimidation - and ensure that there are safeguards for witnesses in the future so that anyone providing a witnesses statement does not find themselves in court faced with enormous legal costs.

Thank you again courts fans and we hope to see you in December.

Please also look out for exciting news of an enormous box set filled with unseen footage, live recordings, demos, outtakes and all of the bands albums and singles in mono and stereo. It will also be packed with reproductions of memorabilia and a hard back book. All material is officially licenced from the rights owners with audio taken from from the master tapes. It will be out some time in 2021 and promises to be the final word on the band.

Marvellous. My 60th is cancelled this year so that will be a belated birthday present.

I got under the wire with my 60th as we had Lauren Housley play in my conservatory with Tom Dib and Mark Lewis. A magical night for us all. When this is over, book a live band and have a good time. 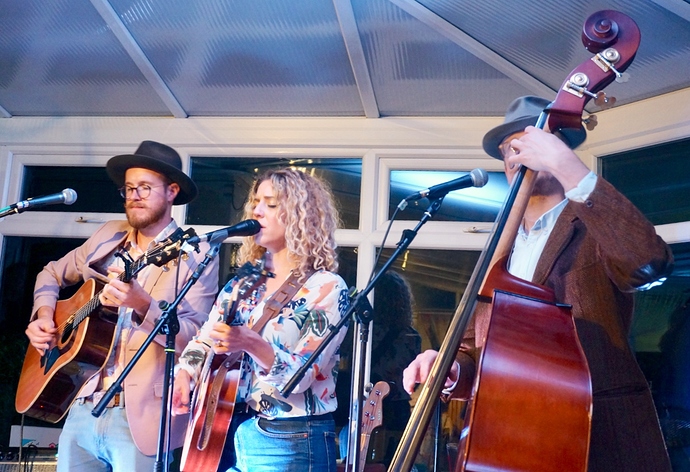 Yes, we recorded and mixed it and it’s in Roon

A conservatory is a building or room having glass or tarpaulin[citation needed] roofing and walls used as a greenhouse or a sunroom. If in a residence, it would typically be attached to the house on only one side. Conservatories originated in the 16th century when wealthy landowners sought to cultivate citrus fruits such as lemons and oranges that began to appear on their dinner tables brought by traders from warmer regions of the Mediterranean. Municipal conservatories became popular in the e...

Clearly there is a question of scale

Have them in the USA too.

You get the idea, anyway… when this is over there will be musicians dying to play and you should treat yourselves to a house concert with friends. Nothing like it.

You know the score then…

My 70th too, Machu Picchu will have to wait😢

Excellent news. My first vinyl LP was Gorilla, and I must have it still somewhere, though I can still remember every word.
I had no idea about these ridiculous troubles they had recently been through and wish I could have given some support in return for the hours of listening pleasure they gave me.
Remember what it was like when you only had one, two or three LPs?

When a teenager I had an 18 hour coach and ferry journey each way, with just gorilla and tubular bells on tape, so I know every word too.

Baby your so far ahead it’s Beautiful…

I studied the swell

As a fan from Down Under since the Urban Spaceman era, this is great news for the Bonzos, their fans everywhere and hopefully it will also lead to attaining the protections required for the legal issues.
Why aren’t those legal eagles who twist the words and spirits of the Law struck off the list for contempt for the Law?

I had no idea of troubles. But as a new fan I am supporting them in my own way having (coincidentally) today just bought a couple of tickets to see them at the O2 shepherds bush in December.

Still tickets for any fans without.

I have owned the BGO Gorilla for about 15 years now and still like it. Last fall I found a few of their CDs on the One Way label as well as Gorilla on EMI. Gorilla is the only one I can get into, it seems, and the EMI CD sounds best compared to the One Way and BGO masterings I compared it to. I will likely keep the EMI Gorilla and let all the rest go.

That Gorilla is a great and wild ride!

The Bonzo’s were a live phenomenon…