Can you make a PDF of the text? Then you should be able to view it.

How do I view a pdf on roon?

See the far right of this screenshot: 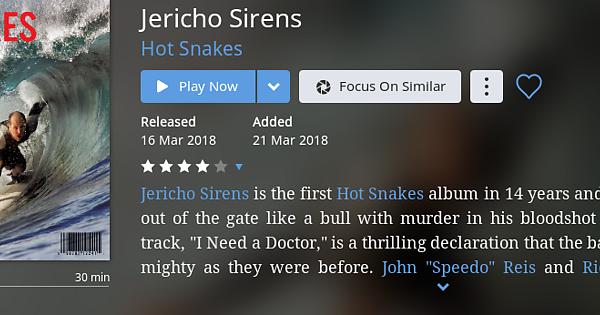 I’ve been asking for text fields all over Roon forever, but there are reasons this is not so straightforward.

Currently I use Tags for adding text to things, but that justifiably made @danny and @brian wince when I told them… And now that Tags have been turned into an imprecise and unpredictable thing (I think that was in 1.1 or 1.2) my precisely added texts are appearing where they shouldn’t… Grrrr. (Moody.)

I’d love this also. We record all our live shows and I’d love to add my reviews and thoughts into Roon to accompany these private recordings.

I second this, as I also have a lot of text info, for example the write-ups on each Bandcamp album I got etc. It would be extremely easy to add a built-in window that displays text files, with a scroll bar, available in the Desktop and tablet versions. At the very minimum it should see the text files and send the intent to any outside editor.

I whole heartily agree! A simple txt file viewer (similar to the jpg/image file viewer) built into the main album info screen would be a very nice feature.

this would be very nice for people that download a lot of unofficial recordings.

After I discovered the pdf file reader option I take my text files and convert them to pdf (I use the free libre office but there are lots of programs that convert) just have to save the pdf in the same folder as the music files.

A bit an awkward work around. I mean what could easier than adding a little code to add the ability to view simple txt (text) files? Can’t possibly be all that difficult.

I have hundreds (likely thousands) of info.txt files. Wouldn’t think it would be hard for Roon to implement/merge with the pdf viewer.

converting them all would be beyond tedious.

So Roon 1.6 has arrived and the big reveal is the updated Roon Radio, which is a wonderful bit of coding using all the latest AI techniques and lots of WOW! and How cool!.

Great! I’m so glad that Roon team gets to show off their advanced coding skills…

However how hard could it be to add a little bit code so that simple *.txt files can be displayed on the main album screen along with the image and pdf files? While this request is probably just a little too simple and boring in comparison to the fancy coding needed for Roon Radio it still would be a very useful and extremely helpful feature, especially for all those albums in my collection that remain “unidentified” and therefore have no real credits or recording information available other than what is in the simple text file that I can’t easily see.

I have hundreds (likely thousands) of info.txt files. Wouldn’t think it would be hard for Roon to implement/merge with the pdf viewer.

converting them all would be beyond tedious.

Really – how hard could this be to do? And the use case is obvious. I get that Roon is focused on ‘core stuff’ now, but to ignore simple & easily implemented requests that would obviously rectify crippling situations for a notable sub-set of users is…

I have ~15,000 local library albums – about a third of those are live gigs. All of those have .txt files in the folder that I cannot see easily while using Roon. This is common for fans of live music. Does this make me a file-hoarder?

Does it make me a bad person, or…an adversarial client?

What about Miles Davis completists?

Look – some companies are able to advance steadily on their core issues while allocating maybe 15-20% of their resources to fix broken or orphaned problem stuff, issue interesting missives every now & then, introduce new employees, do minor cosmetic refurbishing of ancient stale aspects of Roon such as the introductory quote screen, etc.

You know why brick & mortar chains hire shoppers? Because it’s so easy when you’re the store mgr & you’ve been there forever to forget to rotate your displays, vacuum your welcome mat, update your signage, dust, etc.

Please Roon – It doesn’t have to be all or nothing – allocating this 15-20% would generate a lot of good will and PR among the (probably primarily local-library) user base; although many of the fixes would please others as well.

Although I know it’ll be annoying to them, I might as well tag @mike @danny and @brian on this – I really think this topic should be bounced around inside Roon for at least a brief discussion & reflection.

Really – how hard could this be to do?

Many, many of my albums have txt files in the directories. I do not care at all about them, and neither do most people. They are rip logs or some other nonsense. I never look at them, and muddying up my user experience with that junk would make Roon worse for me.

We have a collection of “real life” libraries–sort of like case studies–that we check stuff against when making these judgements–many of them have useless txt files all over the place. This is not just me.

If we import them like PDFs, Roon would start surfacing icons that tempt me to think that the album has interesting text content for me to read. And then after I put in the effort to click, bam…just another rip log. Lame.

Features that tempt with the idea of greatness then dead-end are really bad product design! Those albums show up in focus as having extra text content, too–more temptation/disappointment cycles. It’s much better to just not have the feature at all than to do it in a way that causes collateral damage.

I think our first cut of the PDFs feature actually brought in .txt like .pdf (released either internally or in alpha, not to the public) and we learned empirically that it makes a huge mess before deciding not to do it. We found that almost all of the time PDFs are useful and almost all of the time TXT files contain junk–at least in an aggregate sense. I’m sure you are the guy who has valuable content in TXT files, but please understand that you are one of the few people who does, and that making product decisions based on an outlier without considering the big picture would be a disaster.

Anyways, if we do the “easy” thing that you assumed was a good idea, we wreck the experience for a lot of people. Not having a feature that some want is not a wrecked experience for anyone–it is just a missed opportunity for a few people who want something unusual.

Finally-if you feel that you have to advocate for a feature by dictating to us that it’s easy or by imploring us to “throw a bone” to you or set aside 15-20% of our time or something, you are in the wrong mind space for making a feature request. It’s such an un-constructive and rude way to approach a feature request.

If I back up to the top of the thread, it’s not actually about .txt files at all–it’s about a much easier to justify use case: user-defined notes for albums/artists/etc. This is a reasonable idea. It’s not particularly simple because it touches nearly every screen in the UI somehow, but it is relatively straightforward and does not make a mess of the experience of people who don’t use it.

Thanks for your very thoughtful response. I now understand the problem that you and the Roon team often face when it comes to feature requests. It never gets easy.

May I propose a compromise? How about a way to ONLY view text files that are named “info.txt” and not other *.txt files? This would solve the problem you outlined above and make me very happy.

I just did a quick search of my library and it has hundreds of irrelevant info.txt files. I’m afraid that file name is not as reliable an indicator of relevance as you are thinking.

If we do anything like this, it has to be opt-in. Either by making the note-taking explicit (more along the lines of @Ludwig’s use cases) or by making the file slurping an explicit choice.

Can one not use a file based tag for this kind of thing? I know Roon doesn’t want to turn its users into curators but this kind of request is easily catered for using a file based tag that Roon defines and users that wish to leverage it can populate. Saves an opt-in configurable option within Roon.

The solution was presented much earlier in the thread; just batch convert your txt files. No need to modify Roon.
No idea if this is suitable but it is free…
https://www.pdfzilla.com/zilla_txt_to_pdf_converter.html