Has anyone assembled any BottleHead kits.

What did ya think?

I have built the Crack + Speedball headphone amp. Fantastic experience. Excellent instructions provided along with a very active support forum for when things don’t go as planned. Having the right tools is key, like any project.

If you have specific questions let me know.

Yeah, maybe I’ll start with Crack. Need to quench a thirst to tinker.

Don’t know nothin’ about circuits, etc. I bought a coupla books on electronics just to orient myself.

Wanted an amp, but first a $300 gamble to see how it goes may be in order.

I picked up an Objective 2 amp, with ODAC and RCA outputs. I got mine from headnhifi in Germany, but it’s open source so it’s available at a fair few places. When I’m on my feet again I’ll be soldering it together.

I googled ‘amp kits’ and found several, but that wasn’t one of them.

Something further to consider.

There is an interesting back story to the O2 Amp

There is an interesting back story to the O2 Amp

Thanks for the PM.

You should tell the story here, I won’t consider it a hi-jack. Never mind, I’ll quote it.

Nobody knows who NWAVGuy is. The widely held belief is that he is an engineer with one of the major manufactuers. He knows how to do measurements and his whole thing is about removing subjectivity. Schiit had a hassle with one of their products (which they subsequently acknowledged albeit quietly) which he called them out on. He gets banned from head-fi. They say he PMed them threatening them with lawyers (but didn’t really provide proof that I can remember). He reckons he had no reason to threaten them. Regardless they banned him.

The o2 was his response. Done under his pseudonym and open sourced. Apparently to protect him from backlash from his employers but also to pi$$ off the industry. Apparently measured objectively it is pretty much perfect. Folks who have bought them rave them.

After releasing it, he disappeared. His parting shot. The Banksey of the audio world.

Warrants a book about it sometime!

BTW - People should read the link you supplied. There are deeper messages in it about product sponsorship of forums (i.e. meaning forums that have advertisers, not meaning those forums by manufacturers), and for that matter, pundits’ columns.

To be clear - and fair - Schiit didn’t instigate it. Mikes comment on the forum was a bit “fire from the hip”. In some ways it is good to see guys passionate about their product. Not enough are. And Jason, once he aknowkedged the issue, stated it, changed the design and offered to refit existing units.

Forums are one part of it. These days it’s also the “journalists”. Once upon a time (of print) there was a barrier of entry to the profession. Now with the internet everyone is a “journalist”. Bloggers. E-zines etc. and there is never a disclosure what their credentials are or what their financial interests are. I love the digital camera “reviews” these days that are cut from the company press release. The person has never touched the product. With the internet we marvel at information being so readily accessible. But we have to turn up the BS filters. We aren’t “drowning in information” but misinformation and have to try discern the wheat from the chaff.

I designed my own casework and made some changes, but they’d be a lot of fun to build “by the book” too. 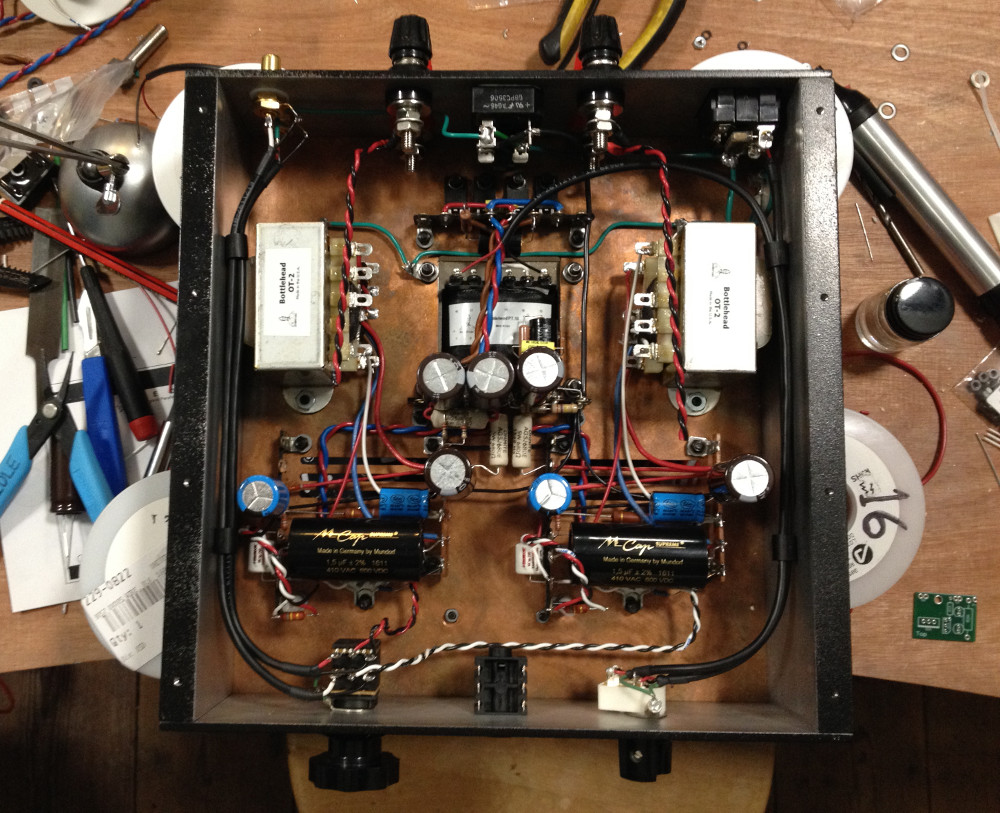 I started with a Crack + Speedball, and found it to be so great that I now run my speakers through the Kaiju 300B amplifier. I can’t recommend them highly enough. Lots of fun to build, sounds amazing, and a great community. I run ROCK from a NUC through a miniDSP Dirac processor, into a Mytek Brooklyn DAC, into a Audiolab 8000q preamp then into the Kaiju, driving some Klipsch speakers and sub. The Kaiju more than holds its own, the design is superb and it’s very tolerant of a hobbyist level of skill with assembly.

I built the Foreplay preamp many years ago, more recently the original Stereomour (2a3) and Kaiju (300b) amps. If you have efficient speakers that can be driven with just a few Watts they are well worth the effort. Fantastic instructions and a great community always ready to help.

Great community and support.
I built a Foreplay, Paramours from them.
Highly recommended…