hello
i ripped a classical box-set. archiv produktions 50 cd. in every folder ther is a front and back cover from the cd.
it´s named cd01, cd02 cd03 and so on. all in one parent-folder with another artwork-folder - all in one place.
what is nice roon did not clump it together- cause in this case it dosn´t make sense cause its a reissue of single-cd´s.
so everything looks great by acident but when i look into -edit-metadata to change the cover, it´s not possible cause roon take as “original” the cover from the artwork-folder?
hmm i don´t understand. normally i was expecting one big box-set with 50 cd´s inside and i have to manually ungroup- any idea

Mike set out the current functionality for artwork in this post. Could you clarify your artwork storage by answering the following questions:

Ok i thought i described it well…i ll try better.

Roon is set to take „best“ but in „edit album“ normally i can see the picture inside the folder so i can choose.

What file is Roon currently using ?
Do the “various jpegs” in the artworkfolder just show a common box set cover ?

If so then doing a batch change outside Roon to change the name of artworkfolder to something like “boxart” should see the cover.jpg used.

Roon will use the “best” cover it can find, which appears to be the box set cover. If you can hide that cover from Roon then it will use cover.jpg.

What file is Roon currently using ? Do the “various jpegs” in the artworkfolder just show a common box set cover ? If so then doing a batch change outside Roon to change the name of artworkfolder to something like “boxart” should see the cover.jpg used. Roon will use the “best” cover it can find, which appears to be the box set cover. If you can hide that cover from Roon then it will use cover.jpg.

ok i was too fast in beeing happy…
i´ll try to get a bit deeper into my cover problem. maybe you can show me a solution. as describe i would like to unbox the archive-production 55cd box. in every cd-flac-rip there is adescibe a back.jpg and a cover.jpg

even if they are not clumped together i see 107 jpegs in every album available. in some cases this is nice. i like to avoid this in this case cause the boxset is just 55 diffrent cd´s so i would like to treat them as individuals but with the metadata from the boxset (maybe this is the difficult point)…

Let’s have another go at this.

What is the name of the artwork file that Roon is currently using ?
Where is that file stored ?

front.jpg
it´s stored under the parentfolder in Archiv/Archiv Production 1947-2013 - cd 01 together with the flacs from the first album

but ok if i try to find somting… 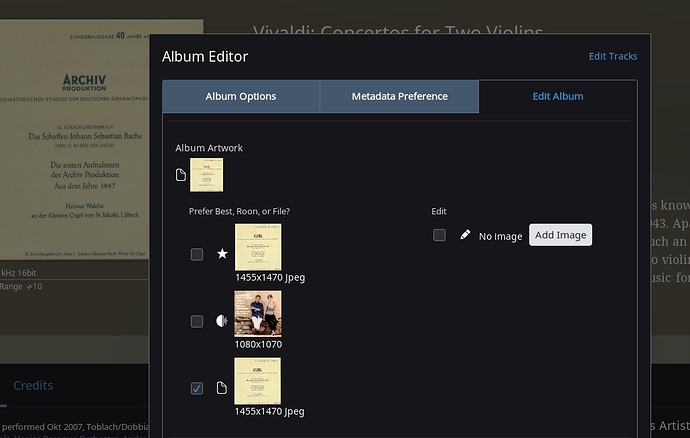 First of all, make sure you have a backup of the relevant music files.

Do you still have separate albums in Roon for each disc, or have they now merged into one album ?

Do you still have the following directory structure:

I see that Roon has a different cover available. Is that different for each album ? Do you want to use that Roon cover ?

Select All the relevant albums (right click on one, then top left menu)
Edit/Metadata Preference/Artwork/Prefer Roon

If not, and you still have separate Roon albums, then I would move all jpegs out of the parent and CD directories (into a storage place outside Roon’s watched folder) retaining only a single JPEG in each CD directory named cover.jpg. Then Select All and Prefer File. You might then add back other pictures if you want to access them in the Gallery.

OK. Let’s flag @mike and see if he can help. If you have separate cover.jpg files in each directory and have preferred Artwork from Files, then I would expect Roon to use them.

Hey @latenz – can you zip up one of the directories and PM me a link to download it? This will be faster if I can just look at the media.

If you have a Dropbox link, that would be great. If you don’t have anywhere to upload it, just let us know and we can give you a way to upload it directly to our server. Thanks!

I send you a pm … Dropbox-link

I took a look at the media you sent over and the results look like what I would expect: 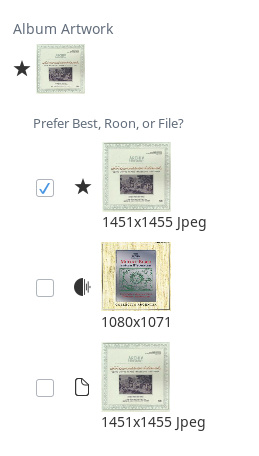 That’s different from your seeing, correct?

Can you give me the exact path of this disc and one or two others? You can just click the “three dots” next to any track in the album, click file info, and then “Copy File Path” in the top-right.

I have a feeling something is making Roon think these discs are all part of a set, since I’m not seeing any issues with just this one disc.

i send you the informaion as pm…
and i don´t know why roon think this is a set. just to try somthing. i deleted the “main-cover” …the one wich is shown on all cd´s - made a rescan…all stays the same. this is not what i´m used too?..looking forward.
thanks