The original Brooklyn Bridge apparently is capable but the firmware is holding it back. Discontinued or not… people are still using the DAC and giving them all it’s capable of by a small firmware upgrade probably isn’t too much to ask…

I guess I should add my question into Mytek support on the original brooklyn bridge supporting 48k rates was answered by Michal. I understand not supporting legacy products but I’m sure there are a few lying around somewhere at Mytek… the DAC wasn’t discontinued 10 years ago!!!

"Yes, this is true that it could be supported, but the problem with B Bridge is that we discontinued it and will not be able to release new firmware. Please check mytek.audio for the news on Brooklyn Bridge 2 later this spring.

Something tells me people questioned 48k support before it was discontinued. So what was the reason then for not doing something about it?

Hi ffk!
I have to admit that your post looks very interesting to me. I don’t remember any other requests for 48k based DSD support. From the engineering point of view it behaves simillary to normal DSD so I added it to Brooklyn Bridge on USB and SPDiF’s inputs. To be honest it should work for Network input too, but I’ve never seen any file in this format that I could play and test via network. Here you can see how it is displayed. 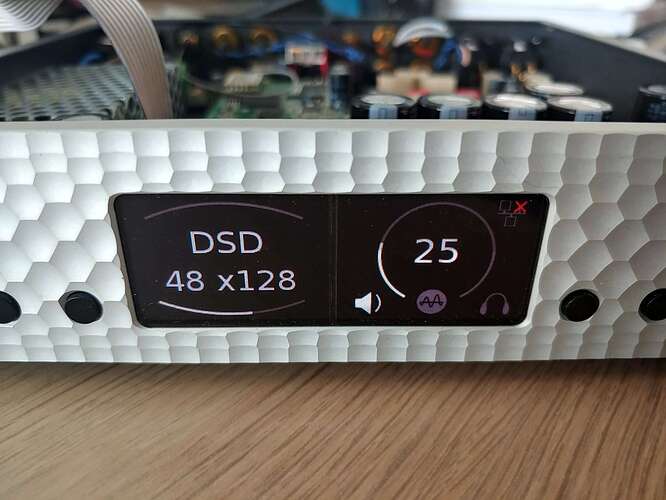 Thank you @Pawel_Gorgon for you reply. I’m sure there are a few Mytek users here that have encountered this. It would be nice to add to the list of features that the Bridge II roon core + dac supports all DSD256 rates.

I’m using USB input as I thought only USB input supported DSD256 rates. As you can see the DAC doesn’t seem to like DSD256x48.

DSD256x48 is a different story… No lock on dac from 48k source. Files plays at slow speed with noise.

I don’t remember any other requests for 48k based DSD support. From the engineering point of view it behaves simillary to normal DSD so I added it to Brooklyn Bridge on USB and SPDiF’s inputs. To be honest it should work for Network input too, but I’ve never seen any file in this format that I could play and test via network.

Are saying that I can/will be able to send DSD256x48 on SPDiF input? As of now I thought the only way to recieve anything above 256 if via USB? This would be a most favorable option…

Unfortunatelly you can’t send anything above DSD128x48k on SPDiF because of SPDiF limitatations. It uses 384k PCM to send DSD (DoP). Frankly speaking I heard only of one device which sends so high rate on SPDiF and it is our Brooklyn ADC. It is something we have already done “over standard”. For 256DSD it needs over 700k PCM for transmission. It is not possible on SPDIF for sure.

But all of these are not true in case of USB Native. In this case DSD256x48k uses same data bandwidth as PCM 384k/32b so everything should work as expected. I have done tests only for DSD64x48 and DSD128x48 for now. It works like a charm. DSD256x48 has to be tested thoroughly for sure too. It should work.

I have already made tunings for DSD256 over USB (native) and after my first tests I can say that it works. Firmware 1.60 is passed to our testers, but they are very busy now. They should make full tests in a week or so. If you want to try it ,please contact me in private message, I can share with you Release Candidate version.

I have already made tunings for DSD256 over USB (native) and after my first tests I can say that it works.

The whole DSD thing from almost all DAC manufacturers is vague. Many companies don’t clearly say anything about the supported sample rate family in DSD. They just say it supports DSDxxx. And that usually mean DSDxxx 44.1k. If you don’t go looking for it the only way you’ll find out is when you throw a DSD256x48k file at the DAC.

I’m not the only one questioning dac manufacturers about this…

I did happen to notice Mytek throws the 11.2 Mhz in at the end of the manual. This is the only place that has a reference to sample rate family, but disguised in MHz. I guess it’s just assumed that if you know what DSD is you know that 11.2 Mhz means that the DSD256 compatibility of the DAC is limited to DSD256x44.1k.

DSD256 48k rates are 12.288Mhz. Will the change in the DAC firmware to get lock on a DSD256x48 rate harm any of the internal components in the DAC or have a negative effect on the sound quality the DAC?

Is it that much more difficult to get a DAC to support 48k? It seems like such manufacturers make it a big deal to support 48k rates.
Is it like overclocking a processor?
Is there some sort of instability that is difficult to overcome?