Do you think it’s worth it? My library is not that large, about 600GB. And I have a high res solution right now, that works with my iPhone/iPad with a Dragonfly RED and I get top quality with that. My library is stored in OneDrive and I listen to it with a iOS cloud player. It sound ok, Tidal sounds a little better.

But what I really want is the Roon interface.

Thanks for any advice.

My Roon Core runs on a late 2012 i7 mac mini with 16GB and a SSD.
It runs stable with no issues for a little over a month now.
The Core connects cabled to my network without any issues.
Wired and Wifi endpoints work very well in this setup.

If you have an old Mac, try it, though you really want an SSD for the OS/Roon database, and 2012 iMac’s don’t have this as standard… if you’re going to buy something specifically for a Roon Core, I’d recommend getting an older 7i3 or 7i5 NUC and installing ROCK.

Roon is installed on my Mac mini server i7 late 2012 with an SSD running Catalina. It has been working like a charm for almost a year now. This version of the Mac mini is known to be a great one, so there should be no issue at all.

My FLAC library is hosted on a NAS (2 SSD as a mirror RAID). The NAS and the Mac communicate via wifi (5ghz).

The roon endpoint is a node 2i connected to the network via ethernet.

I am running a vintage Mac Mini with 2 TB of music files stored on a NAS as well as Tidal, and everything works just fine (so far.)

Here’s the specs on my mine - I did replace the old hard drive with a 120GB SSD, and the Mini is dedicated to running Roon: 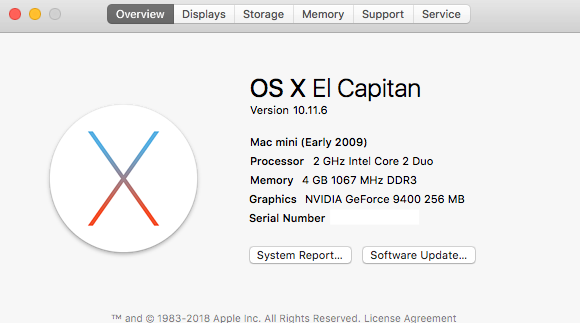 i‘m using a mac mini 2012 with a 250 gb sata ssd (originaly a 1 tb hd was built in) for years now. before with mac os and currently with ubunu server. it works without any issue exept the problem during the introduction of catalina. roon could not access usb drives for some weeks until they updated roon. therefore i‘m switched to linux

my music is located on 3 2 tb usb ssds. the mini has 4 usb ports and thunderbolt is also possible in case you need more external drives.

Mine is a 2009, with 4Gb of memory and a 512GB SSD on Yosemite. Works a charm and only cost me $200. If you are going to run it as a headless server, the processing requirements are much less than Roon’s suggested specs.

Thanks a lot! This is by far the most helpful community.

Get a used NUC to run ROCK instead.

They were shipped with spinning SATA drives. (https://support.apple.com/kb/SP659?locale=en_US)

Edit: I just did a search, and there are some used NUC’s and tehy are indeed a little cheaper than the iMac. I might go that route.

That is definitely a better idea - the NUC/Rock combo won’t have the overhead that the MAC OS will have. I don’t know how to quantify what the “overhead” is, but I would think running ROCK would more efficient.

If you can swing it, get one of the fanless NUCs from SimplyNUC or somewhere else. Or package one up yourself:

So are you afraid of ESD? Does the thought of Arctic Silver Heatsink Paste make you go cold? Are you fearful of Phillips screwdrivers? Do you still want to play with the NUC? I have found the Goldilocks computer for you. Semi-Custom Fan-less NUC...

We are trying a new wiki-esque method of showing the settings in AudioLinux. October 2019 Things evolve. Over time I have found that Euphony OS is simpler to install and run and it sounds better to me. I had been running a two box solution with a...

I have tried ROCK and I have found that Gentoo Player is more flexible and sounds better!

So, are you using Gentoo Player instead of Roon altogether? I an running Gentoo on a RPi as a streamer for Roon, but haven’t tried it as an independent solution…

Using an old 2010 Mac Mini that I had laying around. Upgraded the HD to 1T SSD and running High Sierra. Works like a charm, streaming mainly TIDAL and some select hi-rez files that I have. Streaming to a mixed environment – 8 Airplay devices (grouped), random 6 Chromecast devices, and 2 Roon Ready for dedicated listening. No issues whatsoever. Moved the core from a MacPro to the Mini, which now runs 24/7 headless in a back room somewhere, and controllable from any of a number of laptops, desktops, iOS devices around the house. I converted an old iPad Mini 2 I had laying around into a pretty much dedicated Roon controller via the Roon app in the music room. I love that I’ve been able to repurpose these outdated devices. The only cost involved in my case was the $130 for the SSD.

I had a 2011 Mac Mini. It has been running 24/7 since new, only restarted for updates. It was working flawlessly, better than my 2017 mid range desktop pc (maybe because I use the pc also - Mac was just a music server).
Unfortunately it died around a month ago. I am not sure what to do. Using PC for now but it is not always on.

Running a late mini (2014) as well. Upgraded RAM and installed an SSD 4TB to store music library locally. Running ChronoSych to keep 4TB drive up-to-date with all my music sources in the network (iTunes, FLAC, etc). Wired connection to my network. Running for over a year flawlessly.

Same here: Mac mini Late 2014 wired to router, been using it with Audirvana forever and switched to Roon early last year. I was surprised find that the latest OS X version Catalina is supported on this. I just upgraded to it and Roon has been working flawlessly on this.