Hi, I got a CXN V2 a few days ago. With latest firmware update this device is “Roon ready” now. Everything works fine, but I discovered a problem playing DSD64 files. CXN V2 is capable playing DSD64. Playing such a file directly from an USB-Stick plugged in the device works. Playing the same track with Roon there is a DSD64 to 384 kHz PCM conversion, which means a reduction of quality as far as I know? Has anybody discovered the same problem. How can I playback DSD64 losless?

There are two options for “Roon ready” DSD-mode:

I tried both, finding out DoP is the better one, but Roon is doing a PCM conversion.

Tried sending the same DSD64 track to the CXN V2 by “Audacity” and this worked fine. Very mysterious thing?

As an aside, while the CXN can accept a DSD 64 file as input, the first thing it does with it is decimate it to PCM. So, given that the DAC chip does not play native DSD anyway, I wouldn’t be bothered by it. In fact, imho, you would be better off, by having Roon do the DSD to PCM conversion and just sending PCM to the DAC. 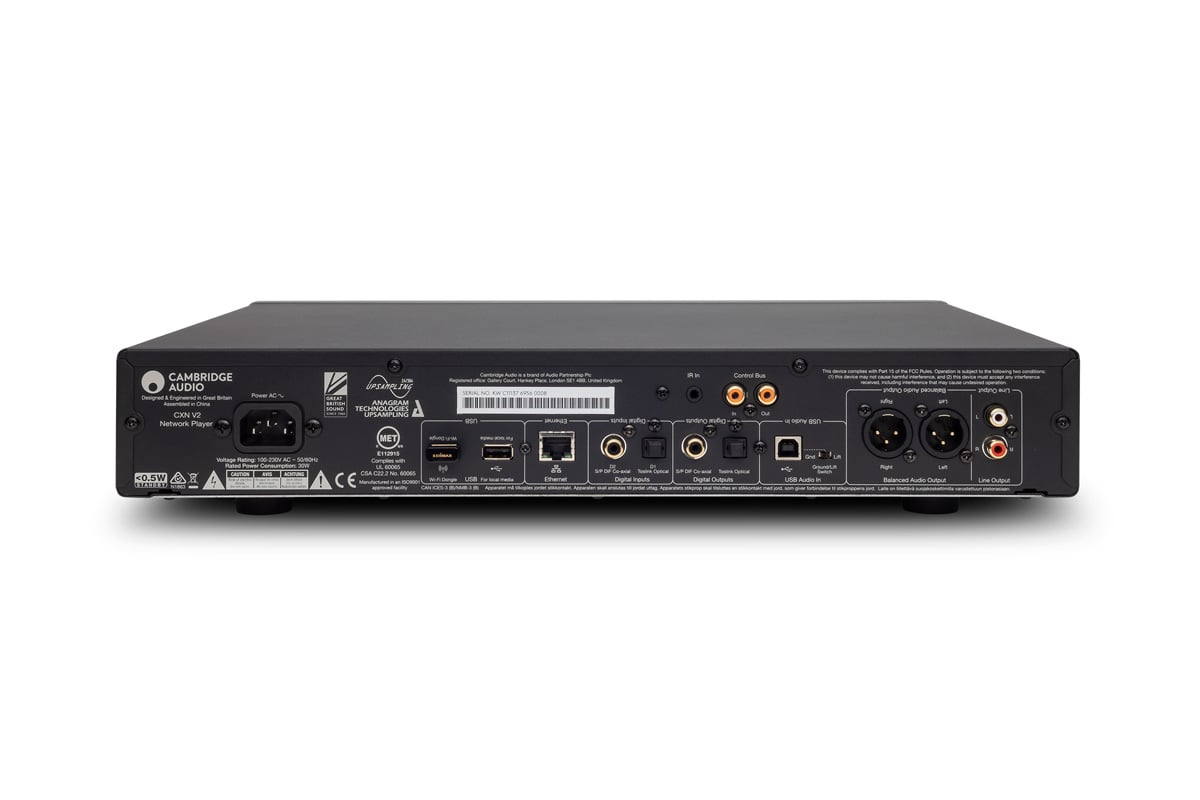 It comes with a wifi dongle and antenna

Should work either way, i ethernet mine as wifi drops on HD files

I’m using an IntelNUC7i7BNH, Roon version 1.7 (build 528) stable. Unfortunately by CXN is not in range of my router, is I have to use WIFI for connection, which works fine. When I tried Audacity I used the version installed on my iMac (macOS 10.15.4 Catalina) also via WIFI.

I’m using it via WIFI and everything works fine.

So here are some screenshots. 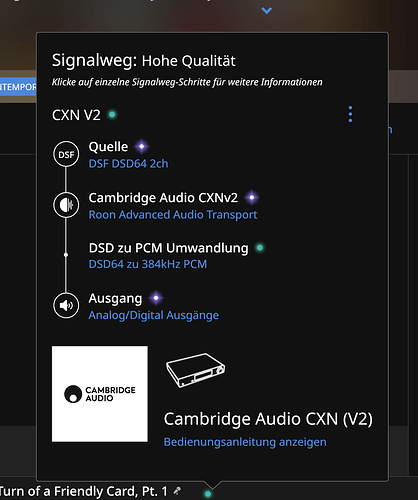 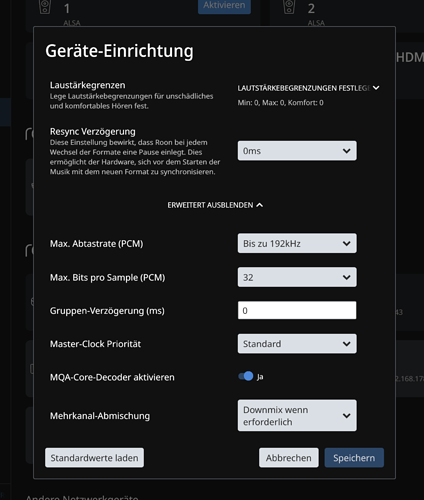 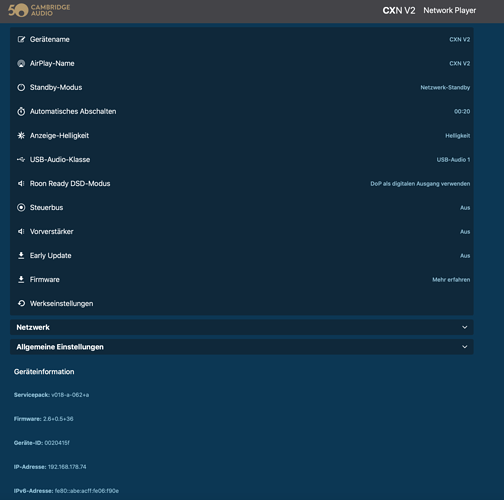 Okay, As I mentioned previously, your DAC cannot process DSD internally. It will decimate it to PCM for processing. Roon is sending the untouched DSD file to the CXN, and the CXN is turning it into PCM.

Roon is showing you that is what is happening. Let me dissect the Signal Path for you.

Here you see Roon is sending DSD64 2 channel via Roon Advanced Audio Transport. So the first circle is the file untouched by Roon leaving Roon and the 2nd Circle is showing you the CXN is receiving the untouched signal from Roon. 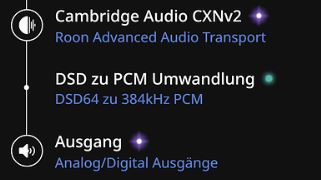 Wi fi varies dramatically, the WiFi dongle for the CXN v1 , was upgraded a few years after launch, I got a prototype of the new one to test until a lightning strike wrote off the CXN and dongle

The insurance replacement was the old one

By then I had started adding Ethernet which is why the lightning did the damage it hit the phone line and hence the ADSL , mains was disconnected but not the Network ugh

My house is all brick , concrete and plaster walls , really good for absorbing WiFi also seems a lot of neighbors interference, I lose at about 18:00 when folks come home

If it works great stuff

Thank you very much for your answer. If I got right my CXN can’t play DSD from Roon. But if I put the DSD file on an USB-stick, plug it in my CXN and play it display of CXN shows a DSD file playing. Is it right that the CXN can play DSD64 but if it gets the file by RAAT there is always a conversion to PCM?
All in all that won’t be a severe problem because I don’t have many DSD-files and the CXN does very good work and produces a very good sound by upsampling any audio file to 384 kHz

To be clear, it does not matter whether you play DSD from a USB stick or send it via RAAT from Roon. The CXN converts any DSD input to PCM, even from the USB stick. The CXN cannot, as in never, no matter the input source, play native DSD. It will always convert the incoming DSD to PCM first.

This is because the DAC chip used in the device cannot play a DSD signal. It can only do PCM.

From the internet Steve hofman forums

Interestingly [or not, I guess], the Cambridge Audio CXN contains a pair of Wolfson WM8740 DACs. The CXN specification states that all incoming digital signals are upscaled to 384K / 24 bit PCM. The data sheet for the Wolfson WM8740 DAC states that it can handle up to 192K / 24 bit PCM. Nothing in the data sheet about it being able to natively convert DSD. So, while the CXN player can play a DSD64 file, it has to convert the file into PCM anyway as the DAC does not handle DSD. Plenty of devices that will play a DSD file are, in fact, converting it to PCM, either because the device’s own DAC doesn’t natively convert DSD, or because [i’m thinking home theatre receivers here] DSP is applied at some point in the signal chain

@Rugby and @ged_hickman1 are correct (thanks!), the Cambridge Audio CXNv2 does not process DSD natively regardless of the input source. Wether it is Roon Ready streaming or from a USB stick, the device will convert to high-resolution PCM before it reaches the DAC.

The “Roon Ready DSD Mode” option determines where the DSD to PCM conversion happens – on the device or on the Roon Core. When the device is configured for “PCM for Digital Output” the Roon Core will do the conversion in order to allow non-DoP capable DACs to output audio for DSD content.

I wonder if anyone here finds the CXN a bit thin on the bass? I bought a lumin d1 off of someone and they miss the bass in its presentation with the cxn v2. I think he is using Spotify and some nas local library, but was the same for the d1 when he had it. Any thoughts?

He is maybe going to try roon with a little help from me soon to see if that helps but can’t do much with Spotify there, maybe Qobuz or tidal might suffice?

Thanks I noticed the same issue with my CXN v2 and DSD albums and now I understand more clearly! I have a question though: will the same album sound better in 24 bit FLAC format than the converted DSD Version? Thanks

That is a per user preference. But the source master is going to matter more than the format, imho