Can I add Apple Spatial tracks to Roon?

If I buy Apple Spatial tracks, can I add them to Roon’s library?

I want to be able to use Qobuz and buy Atmos tracks from Apple and only use one player interface. Qobuz recommended Roon, since you can’t add tracks purchased elsewhere to their app.

I don’t think you can purchase spatial tracks. It seems to me you can only stream them.

Hmm. I have tracks in a directory like: 01 Luminous.movpkg I assumed this weird filetype was because it was Atmos, but I guess it’s just a weird lossless format. 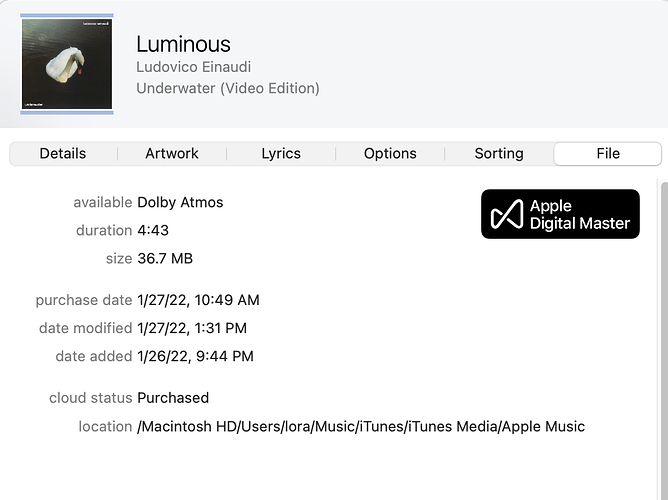 Although this does suggest that it’s Atmos, doesn’t it? It says it’s purchased.

You can’t buy spatial tracks from Apple, that picture shows that Atmos is available but it means you can have it in Apple Music.

That is my understanding, when they made the announcement for spatial audio and losssles they put out a FAQ saying purchases will still be in 256AAC.

That being said, if its a video maybe its different ?

Edit: Does appear to be Atmos What are the “Spatial Audio” Dolby Atmos files in Apple Music? | by Mohan Noone | Medium

The “available Dolby Atmos” simply means that you can listen to the song in Dolby Atmos if you have an Apple Music subscription. The .movpkg indicates that the file is a movie… I am guessing that is the last track on the album?
but even if you could purchase/download Dolby Atmos songs from Apple Music or iTunes, Roon does not support Dolby Atmos, so they would either play in stereo or not play at all.

Either way the answer will be no. Decoding of any Dolby format would require a license. Roon must unpack at Core before sending to endpoint. It means the Dolby decoding would occur at Core and Core has no way to do this. Roon won’t pass a Dolby format untouched either (although this would be the preferred way to do it, see below).

One other tricky part about the ATMOS format is it holds both the individual audio channels plus audio description metadata. This is what allows an ATMOS processor to support different speaker configurations when there are less actual audio tracks. It uses the audio description data to send those tracks to the available height and other spacial channels. This means Roon needs to send the ATMOS data untouched, something it won’t do, or you’d need Roon to decode based upon your specific speaker configuration and, really, you just want that configuration data sitting in your ATMOS processor and not in some audio server. This is especially true if you’re using a microphone for the processor to calculate delay and EQ curves. The processor really needs the direct ATMOS data to decode against this DSP for it to work right. This isn’t something you want to painstakingly feeding into Roon.

ATMOS is a mess for Roon. Don’t expect it. Just let your surround processor handle it. It knows your speaker details and will apply the metadata correctly.

EDIT: I had an offline chat about the above with another forum member. What is not accurate in the above is that some Dolby and DTS formats use a 2-channel PCM bitstream to encode. What this means is, Roon could send this bitstream as 2-channel PCM to the DTS / Dolby decoder and it will work fine. The decoder will see it as that format, decode it, and play it back correctly. Sending the bitstream to something that doesn’t recognize or can’t decode it would produce noise. Additionally, for this to work it needs to be sent bit-perfect so no DSP, no digital volume adjustment, etc. However, ATMOS and DTS:X and any other format which relies on metadata to decode won’t work as there is no way to transport the metadata from Roon to the decoder.

That all makes sense. I was trying to have a consolidated music player. Qobuz won’t load in music purchased elsewhere. They suggested Roon as a way to play Qobuz streaming and purchased music. But the purchased music in this case was Atmos audio from Apple (or at least I think that’s what the files I’ve purchased are. I guess that’s still undecided.) But I don’t want to maintain an Apple Music subscription just to have a couple albums if buying them is also an option. And I was trying to not have to use different music players for things.

And I was trying to not have to use different music players for things.

The format wars are ugly.

My money is in 2-channel stereo of PCM or DSD. That’s worked for many years and the playback path is constantly improving. Everything else to me is novelty but not really something I want to build a collection around anymore.

I’m late to this thread, but as outlined earlier… purchased music through Apple Music (iTunes) only provides a 256Kbps AAC file for “download” and offline playback (as far as I have found). While this also provides you the ability to “stream” higher quality versions of those files, the requirements to do so are:

I had planned on switching to all Apple Music when they introduced “lossless”, but there are FAR too many limitations, and the music that you “buy” is not the highest quality available. That was a real bummer.

While Roon can play non-DRM AAC files you own, it can NOT integrate directly with Apple Music for streaming. BTW, this limitation is imposed by Apple.

Finally, for my purposes at least, I had taken to streaming services over the last several years/decade for the convenience factor. However, as I got better and better audio gear and was hearing more and noticing quality issues, I have since started to buy higher quality lossless music (mostly FLAC with a minimum of 16bit/44.1K, which is the same as CD quality and better than most streams). I also feel foolish for getting rid of all my CDs without having had ripped them into digital lossless files. I am even considering buying used CDs to rip into FLAC since you can often get used CDs cheap, and as long as they play you are getting the full quality.

I am now managing my offline library through Roon and enjoying life more.