Can I build my own NUC with QuietPC and install Roon on it?

I was thinking to build my own NUC based on this barebones system:

I thought to buy it without any OS (Windows 10 is $120) and then install Ubuntu or even Centos and then look for the Roon package. I know it will be some work, but got Roon Core running on Synology a while ago so can’t be too bad.

Any thoughts on this? Am I crazy? Am I going to kick myself for trying to build my own Roon Core NUC? Can I buy an equivalent NUC pre-configured with Roon and then add my own SSD Drives?

BTW: I’m pretty good with HW/SW/Linux … but just wondering if there is something better I can start with …

Only recently I built a fanless and passive cooled PC using a HDPLEX H3V3 chassis. I got an Asus Prime H310i-Plus R.2 mini-ITX motherboard with 16 GB RAM, an i5-8600K processor, a 250GB NVMe for OS and Roon and a 2 TB SSD with space for three more.

Building this kit was easy, I was impressed with the quality of the parts. This is a very well designed and built chassis, and it is aesthetically pleasing. As OS I installed Ubuntu 18.04; installing the Roon Server was a task of ten minutes. This PC has been running for two weeks now, without problems. I copy new files using an external USB drive and rsync, and this has been easy enough.

One thing though, a 4 TB Samsung SSD goes right now for about USD 480, so if you know where I could get one for USD 350, I’d be interested…

This is pretty good looking system too…

Just to run Roon, this is way overkill and probably 3x what your need to spend.

The system has slots for up to 5 SSD drives so for another $1700 I could have 20TB of SSD storage!

How bug is your freaking music collection?

I thought to buy it without any OS (Windows 10 is $120) and then install Ubuntu or even Centos and then look for the Roon package.

If you’re going to just use it to run Roon then install ROCK for free.

Someone talk this guy down.

Where do you find that price? Not on Amazon and not on https://www.quietpc.com/sys-lora-s: I just looked.

I am not sure what your intended uses are for this rig Kevin, but if is Roon only, or even Roon and other media serving work it is massively over specified. Also you describe it as a NUC but this will be a full sized media PC in a 430mm wide enclosure. It will be huge compared to a NUC. I would suggest the following:

I think you can do what you need to do for less than 1k.

As @Henry_McLeod eludes to a NUC is a very specific ‘thing’. Only Intel makes NUC’s and it stands for Next Unit of Computing. They’re built to a certain standard specification so it is easy for developers to know what they’re dealing with. This is why Roon will support ROCK installed on a proper NUC and not anything else; they know exactly what drivers etc are needed.

You can certainly build a very similar mini PC to a NUC and you can build one cheaper too and possibly one with higher spec. But it is still just a mini PC. It’s a subtle but important difference when it comes to things like support and it isn’t a NUC as that a trademark of Intel.

I’ve built a Ryzen 3 mini PC and have installed ROCK on it and thus it is known as a MOCK build and whilst it runs brilliantly, it is unsupported by Roon should I have difficulties. I’m easy with that as I have a certain level of technical competence when it comes to computers and worst case I could just install W10 and be done with it.

Pictures below of my build. Note the massive fan weigh spins slow and is essentially silent. I’m not a fan (pun kind of intended) of passive cooling - I like a blower there just in case

If I did install W10 on it and then ran Roon Server on it, it would then be supported but I like the simplicity of ROCK and imo it runs the show slightly better than Roon Server over W10. It’s a very lightweight os with minimal overheads leaving the computer free to get on with running the software. 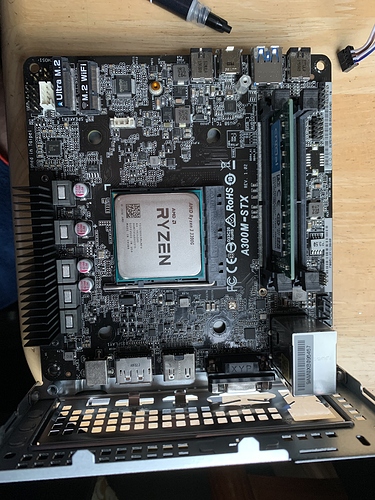 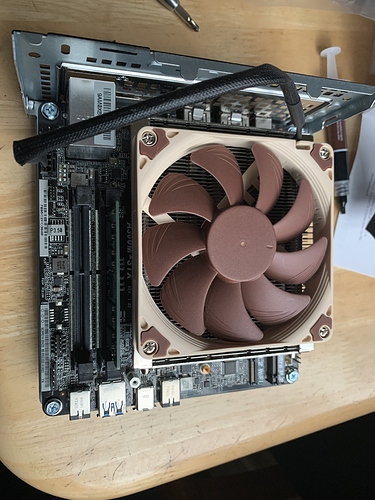 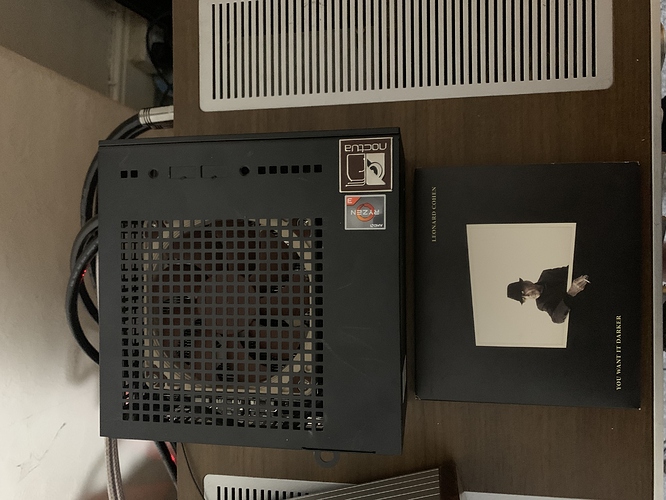 Adreas: Thanks this looks like a better option than what I was looking at. One question on the ASUS Prim H310i-Plus motherboard. It doesn’t seem to have a Gigabit Ethernet port? On my current setup with PS Audio DirectStream Bridge I use Ethernet for both Tidal streaming and to connect to my Synology box. How would I connect this PC to a streamer? I’m thinking of going for the Mytek Brooklyn Bridge for this setup. Don’t I need Ethernet?

BTW: I get the Samsung SSDs direct from a friend and thus get the employee discount.

Kevin, the ASUS Prime H310I-Plus R2.0 has onboard Realtek 8111H Gigabit LAN. I chose this board for its lack of gaming characteristics, but HDPLEX maintains a hardware compatibility list, and you can choose the one you prefer. I like this chassis very much… it is expandable, it cools well, and it looks nice. The H3V3 will hold up to 4 SATA SSD drives - I am going to put in a second 2 TB SSD as soon as the current circumstances allow me to have it forwarded to my place in Colombia.

I went down the Windows 10 pro route with a Dell i5 (6 core) PC, 16gb memory and 250gb SSD. I went this route because I don’t really know much about Linux (or its variants). I have the PC in another room so no issue around fan noise etc. but the whole thing did only cost £500…I haven’t touched it since I set it up over Christmas… so working well for me.

The SanDisk 4TB SATA SSDs were $350 last year on Amazon during Black Friday. They sold out pretty quickly…

But the SSDs mentioned were Samsung.

Hello,
Your Roon system is quite impressive to me.
I’m also have a plan to make one of yours.
But i’m not sure which OS is a good for Roon system between ROCK and Ubuntu.
Some says that the ROCK supposed to install only on CPU’s on-board motherboard.
I need your opinion.
Thanks in advanced.
Jay.

Hello, if you decide to build a media PC using a mini-ITX board and desktop CPU, I wouldn’t use ROCK. ROCK is designed to create an appliance-like device with few options to monitor, administer and debug the system. On such a media PC you can use Windows 10 or, if you feel comfortable, a Linux distro. My fanless PC runs very stable, cool and without any problems so far. Once a week I update the Linux packages and Roon server has behaved well on my Ubuntu distro.

Hi,
Thanks for your fast responding.
I see what’s your mean…
I think i will go to Ubuntu then.
Thank you, have a nice day.

There no reason not to try rock is all you ever want is roon core running. If it doesn’t work for you as core only then don’t bother, but if it does and runs fine I would try it first, costs you a few mins of settings and installation that’s all.

Hi, Thanks for your reply.
Since my new media pc will dedicate to roon only.
I was thinking about which is better for me.
I would need more time to learn.
Thank you.

If you have confidence in your build, and you are sure it will run cool and efficient then you don’t need monitoring tools but if you do require that confidence then you can always install ROCK later.