Can I cannot get rid of unwanted Version notes

I recently got the 40th Anniversary of War’s The World is a Ghetto (sounds really good btw). However, in the version line it is showing “Extended Play (EP)”. First, it is not an EP, but, that mistake aside, I cannot get rid of the version information to put my own. See below: 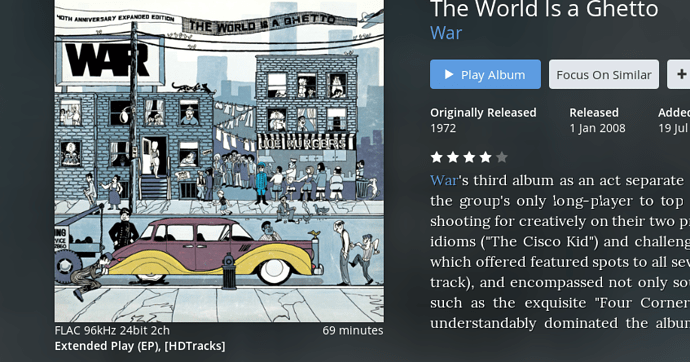 How do I get the “Extended Play (EP)” off the version line?

I assume you tried the edit crayon on the right bottom of your screenshot and the identify album button?

Use the edit crayon on the bottom right, then there is an option to “Edit Version” and you might be able to delete any text that is there.

That is the thing. There is no text there to edit or delete. In other cases, there has been pre-filled in version information which I HAVE deleted. Not in this case.

You can’t select a different version?

The others versions are wrong
I have selected the correct version of the album.

Hey @Rugby – this is a bug, already fixed for next release. Thanks!

And thanks for the heads up: