Can I import albums from JRIVER/Ponomusicworld?

I have tried but have had little success. Can you help?

Hi @Mark_Clemons – what format are the files in? Can you upload one or two somewhere (like Dropbox) and send me a link in private message?

They’re FLAC files. I’ll try to send them via dropbox.

I had no trouble putting Pono FLAC files in a watched folder for Roon. I’m curious what issues you might be seeing.

can you tell me how you created the watched folder for Pono?

FLAC files purchased from Pono or HDTracks are just basic FLAC. Nothing special and they work perfectly in Roon. I use the full JRiver program and I have the Pono branded version loaded as well. I do only use the Pono version to do the actual downloading. I have a designated music drive which is where Pono saves the files to and that location is what I have designated as a watched folder in Roon. The second an album is finished downloading via the Pono application it is in Roon.

The first question is where you have Pono saving your downloaded files? and do you move them from that location after Pono downloads them? You would just specify whichever location the files reside as the location for Roon’s watched folder.

thanks. I guess I have a problem with older files? I just ripped a CD to Pono & it went straight to Roon! So I’m not sure why some file transferred & others didn’t.

Most of my music is in my C drive on iTunes, however I have some music on Pono MuscWorld 20 that has not transferred. That’s the real issue I have. I want to order the year subscription but I want to know all of my music will be available in one place.

Hey Mark, I think the confusion lies in that Pono Music World (PMW) does not have any music “in” or “on” it. It, just like Roon, points to a specific folder on your hard drive. All you need to do is look inPMW to see where it is storing the music files on your computer and point Roon to the same location.

There are 2 ways to try and find them out and since music could have been put into multple places. One is to go to the music library in PMW, select an album and then look in the bottom display pane under FileName and see the storage location.

In this case, I’ve chosen Bob Dylan, Blood on the Track and then below PMW shows the information about the files. At the end you will notice Filename, I’ve circled in blue the Location that is important… aka… where the music is stored. In this example, D:\Pono is where all the music downloaded from Pono lives. In this example, I would add a Roon Watched Folder with a location of D:\Pono

The other way to check ( and I’d recommend looking at both sources of information) is in PMW menu under Tools, then Options, then File Locations. That screen will tell you where the music that PMW rips is stored as well as where the downloads from store purchases go. 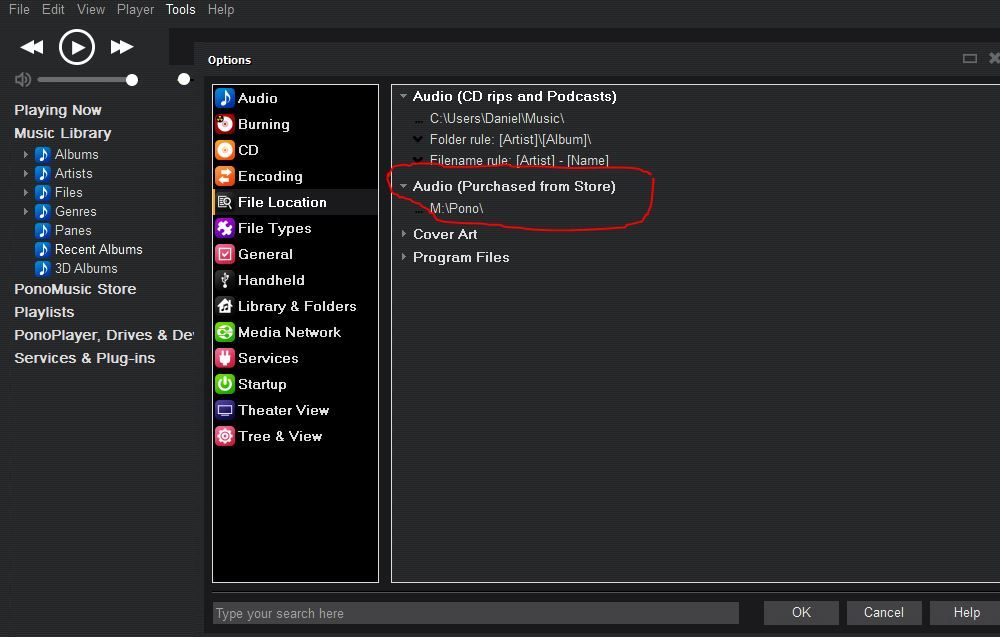 I have circled the appropriate information in red. In this case, music I purchase from the Store is saved in this location when it is downloaded. Which in this example is M:\Pono.

Thanks so much! I’m still a novice on this stuff so thanks!