Can ROCK run on the new NUC8v7PNB Pro Board?

The NUC8v7PNB is the successor to the NUC7I7DNBE from what I can tell. TDP spec for both boards is both 15 Watts. The latest board has a USB 3.1 (type C). Does anybody have a perspective on this relative to running ROCK?

In addition, has anybody used the New Asaka Plato PX case?

Base clock speed for i7 CPU on this board is 1.8GHz, any time you come off that, with the Turbo boost to 4.8GHz the resultant heat output will throttle the processor unless there are huge amounts of active cooling. Hence the larger fan on the board, which will be noisy in every way.
Quad-Core CPU means 8 threads - ROCK initially only uses a thread per endpoint zone, (but can also support multiple zones in a single thread).
A single thread on a NUC5i3 with 8GB RAM running ROCK can support upsampling to DSD128 and downsampling of DSD256 with full Room EQ support at the same time.
A single thread can also support playback of 24/352.8 & 24/384 formats, plus all of the MQA formats and with simultaneous Room EQ as well.
A NUC5i3 with 8GB RAM running ROCK can also support 4 simultaneous zones running some level of DSP on each.
There are actual benchmarks for all of this in the List Your NUC Capabilities Here thread.

Thanks for the reply Simon.

To answer your question as to why I would be interested here goes… Firstly. The DNBE board is used in the RevB Nucleus+ model based on photos that I have seen in an both on an Australian and on the Community. Secondly, I was thinking of using the Type C on the latest for a Second Ethernet connection (with dongle) so that I could independently connect via RJ45 my DAC and home network. Lastly, I was planning on using a fanless case and wanting to use as low power a board as possible to avoid the fan noise as you pointed out.

Simon on see from your hardware list thread that a less expensive NUC is sufficient for most all applications. BTW I only run A single Roon zone using Ethernet to my DAC and that is it. What specific NUC would you recommend? I will what to install in a fanless case as well. Any thoughts on the case?

There are any number of supported NUCs that would do a job for you. The issue isn’t what will do the job but what is available. You need to be able to buy the NUC and a compatible fanless case (if that is what you are after). I have a 5th generation i5 in an Akasa Plato MC case that has the grunt to upsample to DSD128 on a single core and is as stable as anything running ROCK. You might still find the board for sale. You will almost certainly not find the case. So as good as it is, it is largely pointless for me to recommend it!
If you can, mimic the Nucleus hardware. But if that is not possible don’t worry too much.

Henry, thanks for the input. Much appreciated.

For DIY you don’t get much choice other that the Asaka cases, see https://www.avforums.com/threads/intel-8th-gen-i5-nuc-akasa-turing-fanless-case-build.2228766/

However HDPlex has added a NUC backplate for its H1 case see https://hdplex.com/hdplex-h1-v3-fanless-computer-case.html
That would look good, and I had to have my Roon Core machine in my ‘frontend’ what I would be looking for.

Alternatively there are some prebuilt fanless NUCs
See https://simplynuc.co.uk/7i3dnfe-full/

For HDPlex a NUC kit is required, but no link to add to the shopping basket, so some calling and homework required. 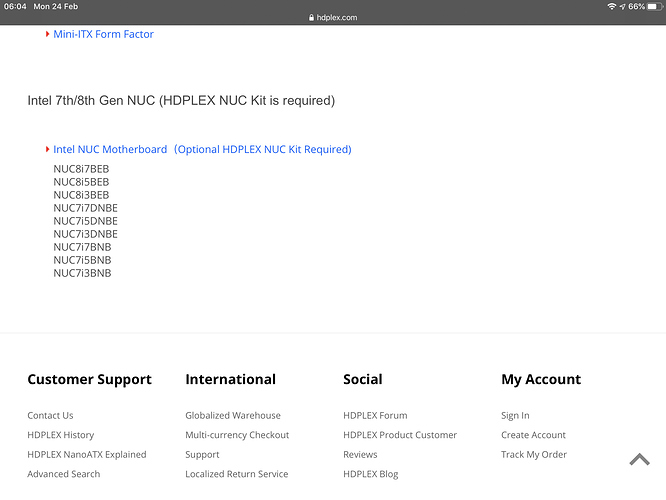 Let us see what you build

Of course, you could try the new Austin Beach chassis & i3 Compute module
https://simplynuc.co.uk/austin-beach-chandler-bay/

Unless I missed something there isn’t a driver for the USB C port on a ROCK.