Can we talk about the whole Overview/Discography thing?

I would as all mine are fine. Qobuz only in library show up as in Library. All other instances the same. What I have found though is a bunch of compilations I have added since 1.8 came out did not add the performing artists so just tracks and all saying various artists. I found if I went and edited one track as I was going to add them myself when I decided to press re-identify track instead it then found the artists for all tracks. I had to do this then to all 6 albums I had added as none added artist names. So their is something wrong with the way its pulling metadata in this version in some circumstances.

I just replied and found issues with artist names not showing up on albums I had added. So metadata issues are not just you by the looks of it. I wonder if this is a result of the server meltdown?

Goof to see another AC fan too.

I just did the same thing with the Merriweather album and it fixed that too. I wondered if Nick Cave was a special case because it has two primary artists - Nick Cave and Nick Cave & The Bad Seeds.

But I couldn’t see anything unusual at all with the Animal Collective album. If I discover more, at least I have a method of fixing it now.

I put in a support ticket yesterday for mine but got no reply. Just put a response on it. Be good if you can add your issues to. They need to be made aware of this.

Scott, if you don’t have any local versions of these but they are in the library, why are 2 of them showing with the library badge, but one isn’t?

Honestly, I really don’t know what’s going on. That screen shot was from today. It clearly did not have a library tag on the album itself in that view. But when I flipped the ‘show library’ icon back and forth it either showed the icon or it didn’t.
There are four versions of this album. Two are 12 tracks, one 16 and one 24 bit. There are also two ‘Versions’ (as shown in the version tab) that have 17 tracks. The Bonus album you see in the shot is the 24 bit, 17 track album. I had three of the four versions. I added the last one just after I posted.
Now, when I came back the library icon is on the album, but the 12 track album. And it stays there whether I flip the “Library” icon switch or not. I removed each of the 16 bit albums, but I still have the library icon regardless.
So I don’t have a clue what is going on here.
The other thing that is just bad about all of this is the only way I can tell what’s actually in my library is to go to the albums page to view them. When I go the the versions page it shows this: 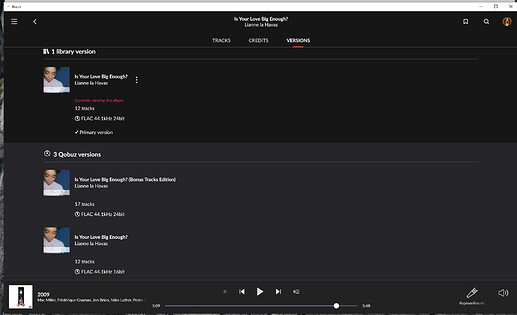 @anon55914447, could you do me a favor? I need to understand whether there is something wrong with my system, or whether I need to put in a feature request.

Also, even though the “+” add to library icon is there, if I click on the three dots next to it, add to library is not an option. Also I note what had been the “+” icon continues to swirl as long as I view that album.
This is all clearly weird behavior. I’d like to know what is causing it.

The the Lianne La Havas “Is your Love Big Enough” album has four Qobuz versions.

It might be my regionalisation, but I only see three Qobuz versions.

When I add them, two show up in the Library

One is the bonus track version (1 copy). The other has 2 versions and is the same album. Therefore the library shows a single copy, versioned.

I can then manually combine the two through edit to group alternate versions.

Great! What about the plus sign. Is that always there?

No, but that’s probably the visual/cache bug that’s been there since 1.7 and previous. I’ve often gone into the Qobuz version of an album in 1.7 with the “add to library” option still present after it’s already in the library. I assume it’s the current manifestation of that glitch.

Okay. That’s very helpful.
So my feature request will be to have the Versions tab clearly list what versions are in the library and what are not. And also to fix whatever bug there is that associates with a library copy offering the “+” add to library icon.
Thanks so much! Now I can finish my second bloody Mary here. I like v1.8 a lot, but this version thing is killing my liver…

This sums up my feelings…

So my feature request will be to have the Versions tab clearly list what versions are in the library and what are not.

Am I going mad here, but didn’t the old version used to have a toggle for displaying or grouping alternate versions in the library? I always had it set to show the primary only, but now it looks like there’s no other choice.

I don’t remember anymore.
Thematically, I can agree with how they’ve moved things now. Discography is the exposition of an artist’s body of work. That’s fine. But it feels like there are a lot of functional things (features and fixes) that now need to be built on this foundation.
Thanks again. This has been very helpful for me.

If I am not mistaken, it is still there, in Settings - General 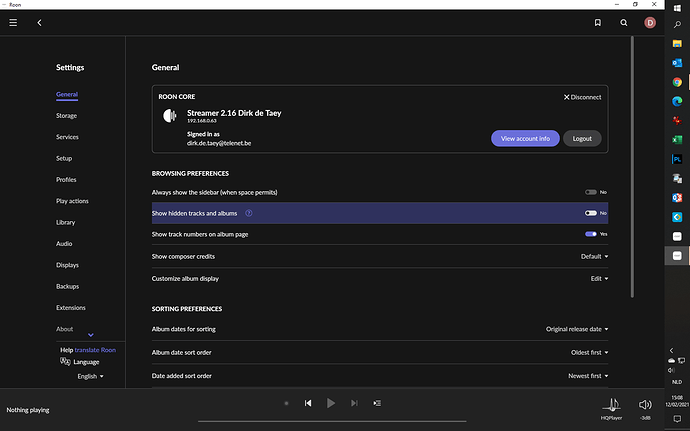 Something like that could be quite helpful. Using the Lianne La Havas example, four albums are clumped together as one version. Half of them are 16 bit and half are 24 bit. Half of them are the same 12 tracks, and half of them are 17 tracks.
In my head, the bit versions are truly versions, but the 12 vs 17 track albums are different. One shouldn’t have to grope around to find there is another album with those extra songs.
When you add on to this the various releases (remasterings, etc.) it becomes sort of complicated fairly quickly. Just throwing them all into a bin to let you figure out isn’t good enough.

DOes anybody else experience this behavior

Or maybe, while in Discography, click the Library button a second time, it turns red and shows what’s not in your library. (I prefer the 1.7 method, personally)

BTW, one difference between the two tabs is that Overview shows all versions of albums in your library. From Disc, you have to click an album then click Versions to see this.

[image] Problem: Although we have library badges to denote library titles in Discography, these are small and pretty hard to parse on the album cover. Solution: Adapt the Library toggle switch to work three ways so it goes All > In Library > Not in Library in a similar vein to the old focus switches that went from blue to red when toggling an exclusion filter.

I think an issue is
If you have a album in Qobuz and Tidal and the file types are the same is will show as in the library.

However if Qobuz has a flac file and Tidal has MQA it see’s these as two separate albums.

I can see this using ‘Air’ as an example.
Moon Safari has two different file types.
Premier Symptomes has a single file type.

So the result is ‘Moon Safari’ is not in my library. 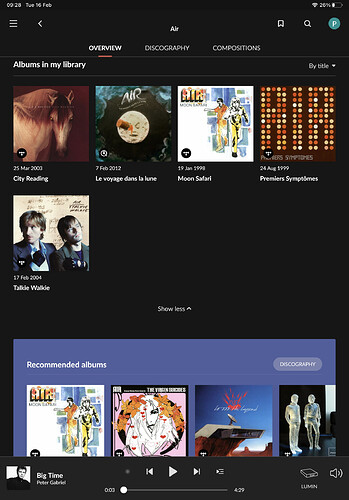 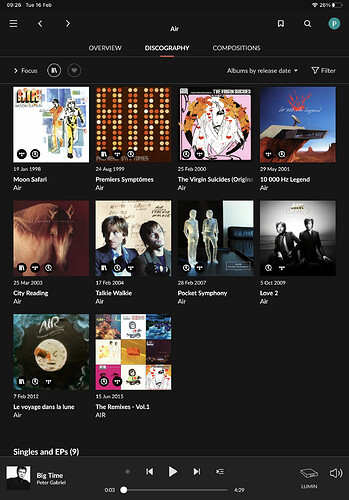