When I copy WAV files into the same artist folder as ALAC files, I can only see the ALAC files. Is there a setting that I need to change or something
Thanks

Roon may be treating them as being a second version of the album release. Are you seeing a “Versions” tab on the Album page?

Yes I have the versions tab, but it only sees the ALAC files.
With the .wv files, I added WAV to the album name so that I could easily see the 2 different file types as I was hoping to do a SQ comparison between the 2 types of codec & also streaming through TIDAL. I even tried removing the ALAC file & removing WAV from the album name, but I still can’t see the WAV files. I’m now using dBPoweramp as my ripping software from the cd’s instead of previously just using iTunes to do lossless files through my 2012 MacBook Pro.

With the .wv files

Is that a typo? I would expect that WAV files have the extension .wav

If you are using dBpoweramp (good choice, BTW!), then I think you would be better to choose FLAC format for your ripped files… 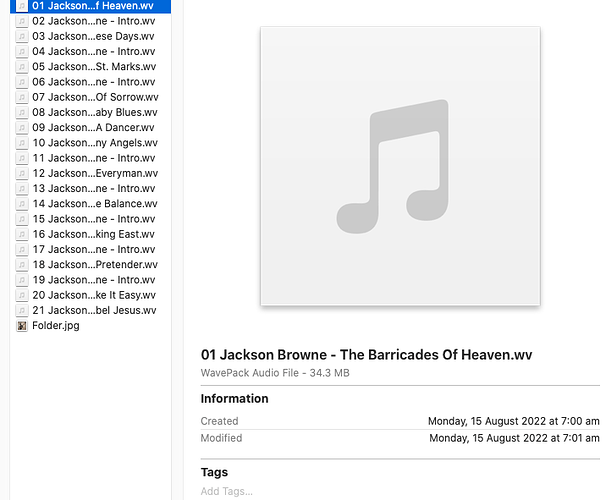 Screenshot of the files created by dBPoweramp. I can play these on my MacBook Pro.

WAV was recommended to me by Benjamin - Mojo Audio (my DAC & music server) as this is the codec on rebook CD’s.

.wv is used for compressed wavpack which roon doesn’t support so it will ignore them.
If they are normal way files then rename them .wav

It appears you have dbPoweramp set to encode in wavepack, not wav. As mentioned, Roon doesn’t support wavepack.

Thanks. I found in dBpoweramp where to change the rip to .wav so I’ll do some testing tonight. Hopefully that works.

Before you rip everything in wav. Rip a few albums in wav and flac and see if you can hear any difference.
Wav is an awkward codec to use, it’s not standardised for its metadata.

WAV was recommended to me by Benjamin - Mojo Audio (my DAC & music server) as this is the codec on rebook CD’s.

No CDs are PCM not WAV.