I have Karajan’s 1963 beethoven cycle and the standard identification process has this spread over six discs, but instead of grouping everything together in a single entry, it’s grouped into five albums, one of which being two discs.

When I use the “Fix track grouping” to make the individual albums match the data expected by the identified tracks, it does basically nothing. For example, the 2-disc entry looks like this in “fix track grouping” 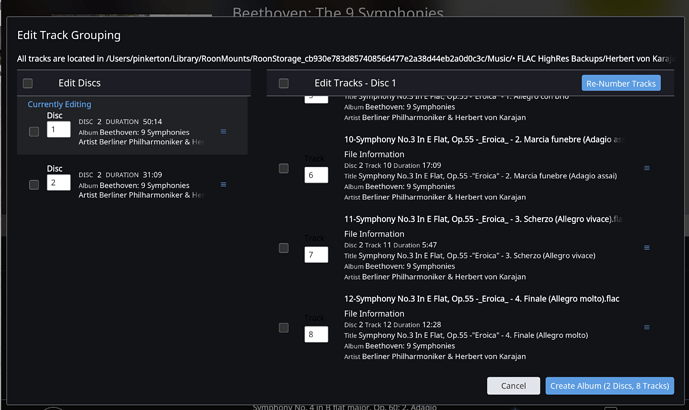 The identified metadata wants these tracks to all be on disc 2, tracks 9-17, and not for some reason spread across two discs, each starting over at 1. If I make these changes then save them via “create album (1 disc, 8 tracks)”, I instead get an unidentifed album with no extra metadata. When I identify it, Roon converts it back to the starting point: two discs each starting at track 1.

I see no way to actually get this into a form that Roon wants to make it be a single entry with a continuous track listing. What obvious thing am I missing?

Hi Mike. Sorry to be a bore, but these issues are usually file tag related. If you haven’t already, please would you check your DISCNUMBER and TRACKNUMBER tags for all of your files? Also, what is the directory and file structure of the set?

I can do that, but I figured using the Roon UI to fix the issues would…fix the issues, as opposed to putting me into an endless loop. Am I using the UI wrong?

Roon does not write the fixed tagging information to your files. I find it better to correct any underlying tag issues at the file level.

Then what does this UI actually do? What is its purpose if not to fix these very kinds of issues?

It uses the Roon database to store metadata. It’s up to you whether you use an external tag editor to keep the metadata in the files, or use Roon to use metadata in its database.

Right, I understand where the metadata is stored.

What I don’t get is that the output of this UI is an unidentified album, and re-identifying it in order to group it with other things puts it right back at the starting point. So what is the intended use of this UI if not to be able to fix issues like I’ve presented?

So, are you are trying to take the album with the 2 discs and make it an album with all the tracks in 1 disc?

If so, click on disc #2, then click the box Edit Tracks - Disc #2 to Select all the tracks from disc 2. Then click on Move To Disc # 1. That will create 1 disc with all the tracks. You will need to manually renumber the disc 2 tracks. Then Create Album (1 Disc, 16? Tracks).

Yes, that “works”, but the created disc – despite being tweaked manually to match what Roon expects the disc and track numbers to be in order to combine these albums into a single album entity in the album list – is then unidentified and doesn’t match up with anything, so it won’t combine correctly with the others.

Identifying it then undoes the editing I just did and puts us back to the start (2 discs).

I guess the short answer is “you can’t do this with the Roon UI, just edit the metadata directly”. And I’ll just ignore this “fix track” UI entirely forever.

Are you trying to Merge these albums eventually into 1 album with 5 (or 6) discs?

Is it a 6 disc set? I see both 5 and 6 disc sets in the metadata when identifying.

My suggestion would be to not do anything with the 2 disc album and just select (right click or long press) all 5 albums and click Edit and Merge Albums.

Then see what you get.

You might want to do a backup first, in case you want to go back to the separate albums, although you can use Fixed Track Grouping to return it to separate albums.

Wow. Had no idea that existed! I’ll give that a try instead, thanks!