I have just purchased the new Giles Martin mix of the Beatles White Album on CD. I already have the 2009 remaster in Roon. Having burnt the CD (the 2 of the album and the third of the Esher demos) Roon seems to ‘think’ I have 3 issues of this album - the 2009 remaster, the new 2018 3 disk set and the 2018 Super Deluxe which lists all the songs from the two 2018 CDs but doesn’t recognise that there are two discs involved. The name of all the tracks in this last case is followed by (2018 Mix).

I purchased this on the day of release a couple of weeks back.

I’d love to fix this as the mixes are quite different. Any thoughts?

Can you share a screenshot of your file tags for this album, as well as a screenshot of the folder structure of these albums from your storage location from Finder or File Explorer?

Hopefully you can help me fix. Essentially I have the 2009 2CD remaster and the 2018 3 CD set which includes a third CD of the Esher Demos. 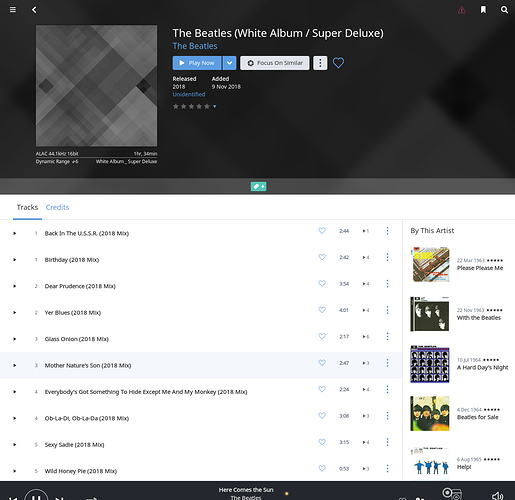 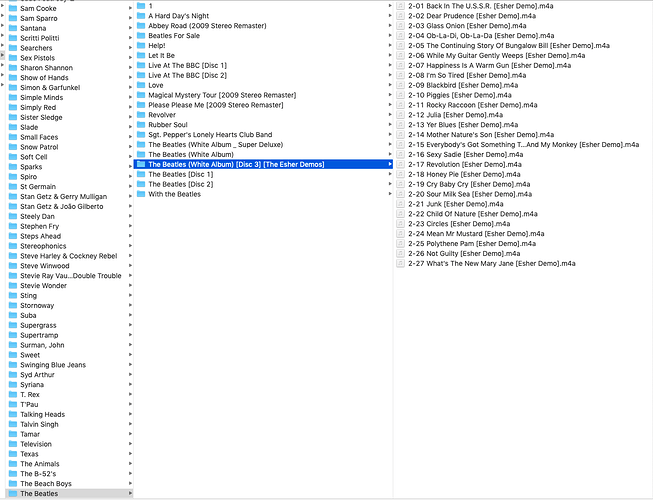 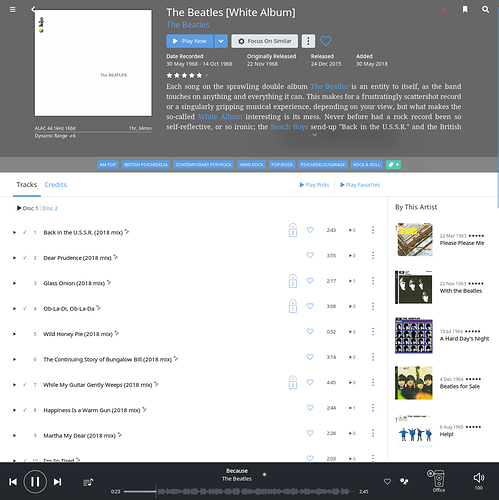 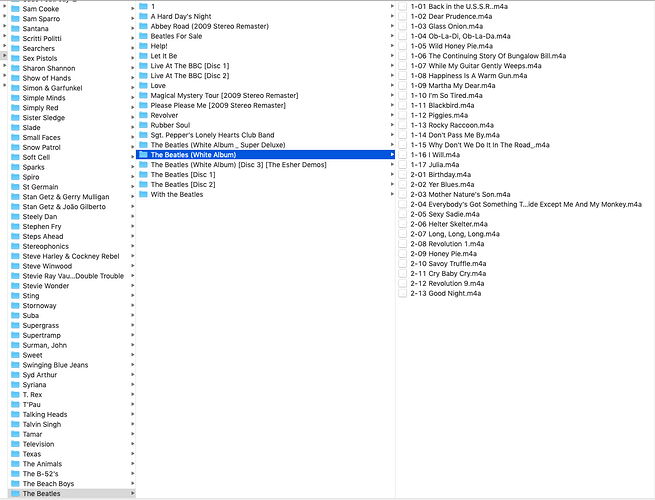 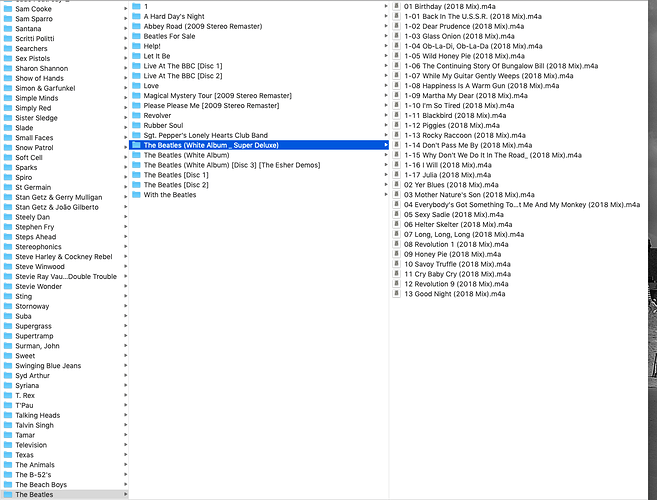 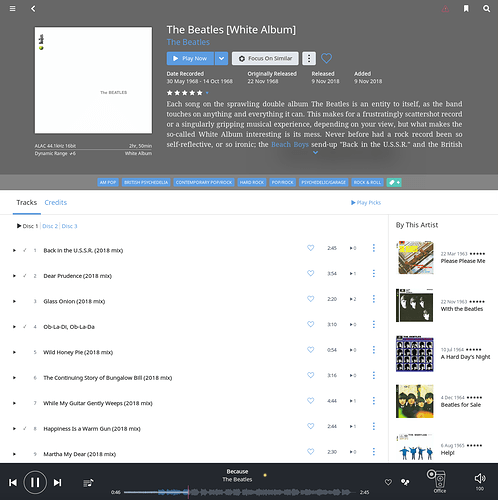 Based on what you’ve shared above, you’ll want to re-structure your files a bit so they can be properly identified in Roon. This article will walk you through the best practices to make sure your multi-disc sets get identified properly in Roon.

Notwithstanding any issues with structuring folders, there seems to be some disconnect within Allmusic’s metadata.

I bought the 5cd version of this and was having trouble getting Roon to identify it, so I added the tidal version to check on labelling. That didn’t work as Roon proceeded to match it to the old 1968 version. Curious, I checked on Allmusic, and it too, only showed the 1968 version.

This was strange as AllMusic had had it as a featured new release for the week of 9 Nov, with the title The Beatles [White Album] [50th Anniversary Deluxe Edition] together with an extended review by Stephen Thomas Erlewine. Strangely, searching explicitly for the title in Allmusic produces no results.

In fact, the only way I’ve been able to find it in All Music is via the featured release link.

I have had similar issues getting CDs identified by Roon. Even if the Allmusic disc title and artist is copied exactly, Roon still cannot identify sometimes. I rip with dBpoweramp so perhaps that puts some metadata in the file which throws Roon off the scent?

That’s helpful. There’s quite a lot of tidying up to do over Christmas. Also I think Allmusic has some catching up to do too.

I’ve just managed to get the 6 CD plus Blu-ray version of the 2018 White Album. Not available in Australia, so imported it. My ripping process with dBPoweramp resulted in three folders:

On importing into Roon the first two CDs are correctly recognized as the third version of the album that I have (original and remastered).

The three sessions CDs are being treated in Roon as Disks 4, 5 and 6 of The Beatles - The Beatles [White Album].

The Esher Demos CD is being treated separately, with no album description.

Am I right in thinking Roon wants me to put all 6 CDs under the one top level folder?

It would be nice if Roon had different album descriptions for the different versions of albums.

It appears that Roon gets its Metadata from a number of different sources including AllMusic.

I have a Roon Nucleus with an internal hard drive which also acts as my iTunes library, so I can burn CDs to it and also share on my iPhone.

I too wanted all my new 2018 White Album CDs (3 in the same Roon directory). To do this I checked out the collection on AllMusic. I couldn’t find it exactly but I renamed the folder in my iTunes library so it made sense and then moved the music from each CD into it. Hey presto, both versions of the White Album now show up fine, including the Esher demos in the 2018 collection.

Am I right in thinking Roon wants me to put all 6 CDs under the one top level folder?

Yes. Dylan posted a link (above) to our long-standing Knowledge Base article about this. Here it is again: