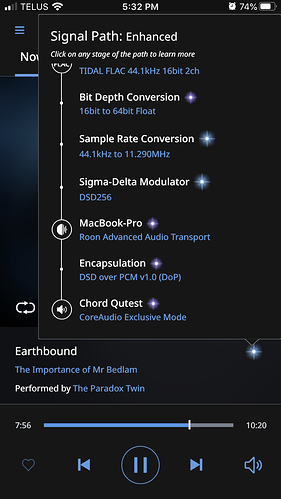 Having fun with settings

No personal experience, but I’ve been told the Chord DACs work best with PCM. Have you tried upsampling using PCM instead?

IMO, don’t do a software upsample as the DAC already does internal upsampling.

Almost all DACs (with the exception of those specifically advertised as NOS; i.e., non oversampling) perform internal upsampling.

Those who chose to upsample outside the DAC are betting that the greater resources of a PC (i.e., Windows / Mac / Linux, et al.) and external software programmers can perform upsampling “better” than the designer of the DAC - which is sometimes objectively true and sometimes (perhaps) not

But it’s pretty cool to have the option to try!

Rob Watts, the designer of Chord’s DACs has said never to upsample with his DACs, unless you want worse quality.