I’ve just downloaded and installed a bit of software Chromecast Audio Stream for Windows and I’ve got Roon casting to Chromecast successfully.

I guess this is common knowledge, but I am pretty chuffed

First I’ve heard of it @Sallah_48 but it may be common knowledge to others. Where did you find the software ?

https://github.com/acidhax/chromecast-audio-stream - allows to cast all audio output to Chrome cast.

It’s really helpful, as I can now cast to the puck, and connect it via Optical out to my mojo and into my adams.

Then i can use the sole USB connector on my Tab to connect to a HDD.

Not sure of the SQ yet, but it’s a solution!

Also, I don’t think it will work with groups. Ie just the one puck at a time.

Ok, ive connected a 2nd Chromecast and it’s working also; it can pick up either/or or both together it seems. The only grey area is the sound quality as it’s outputting via the system output of the PC. Am not able to get bit perfect. 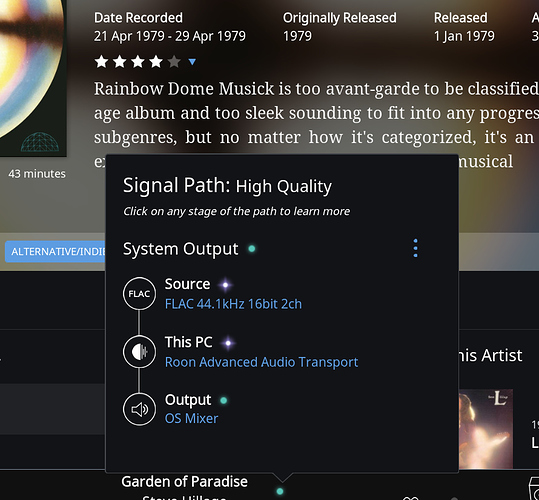 The only grey area is the sound quality as it’s outputting via the system output of the PC. Am not able to get bit perfect.

Yeah, it’s ok as a stop-gap until Roon gets a good bespoke integration going. SQ definitely is not as dynamic as when I connect directly to my Mojo via USB. Roll on the Roon update

Gosh, where to start… when you say “select my Chromecast”; in which app? What sound are you getting? What settings for audio setup in Roon are you using to try to get Chromecast Output?

Are you getting output to Chromecast via other apps in android, eg tidal or google play music?

Is the casting from Google Chrome itself working in Windows?

Perhaps with these we can debug a bit better?

I use my PC right now in Roon as output and that works as it should.

I dont use Google Chrome on my PC but I will try that.

Dont actually know what I did but after closing the program and restarting Roon…voila sound is coming from Roon to my Chromecast. Thanks for the tip about the program @Sallah_48

Good to hear you’ve got it working

I need to test further regarding sound quality. Brief listening in family environment seemed to show the Chrome Cast Stream option to be less dynamic/flatter sounding than the straight to Mojo via USB option. Will report further when I can.

I think it never will be as good as direct USB connection. The Chromecast in a great little device wich works well and sounds good for the money but it still is a low budget device. I don’t have high hopes any software configuration is going to help here. Nevertheless, good enough for kitchen/garden/bedroom/bathroom music

The Chromecast Audio device, sure, but NAD and Naim have integrated Chromecast into their amps/network players and at least NAD have support for 24/192, and surely use their own DAC in the process, so in itself, Chromecast is no longer a low budget/iffy sound quality proposition!

Last I read the Chromecast was topped out at 24/96.

That’s the Chromecast Audio product, but I read a review of a new NAD amp that went beyond. Technically there’s no reason for the limit, if you re-do the hardware.

Took me a while but I have finally found it! Here’s the relevant quote (emphasis mine):

Later in 2015, the Chromecast Audio device (which packs an AKM AK4430 DAC) became especially interesting when an update enabled 24-bit/96kHz playback – when initially released, the device converted all audio to 48kHz – and multiroom playback, presenting a challenge to Sonos. NAD’s implementation supports up to 192kHz.

The full review is here: http://www.soundstagehifi.com/index.php/equipment-reviews/1102-nad-c338-hybrid-digital-wireless-streaming-dac-integrated-amplifier

Not surprised - I can cast Netflix on High Def from my iPad and with 5.1 surround sound - I think the technology (latest chromecast) is about “mirroring” or streaming content to the endpoint setup you have which renders video/ sound. Very convenient for video playback and not that different to apple’s mirroring technology. My kids use it all the time. For me Roon (remote control via iPad or Lenovo Android device) via NUC (source being my synology server and TIDAL) is just as convenient as chromecast for audio.