Roon via Chromecast (second generation) appears limited to max 24 bit 48 kHz. This is true with the HDMI handshake directly to the TV or to a high end AV processor. A Chromecast hardware or Roon implementation limitation? Roon guys will have to confirm. 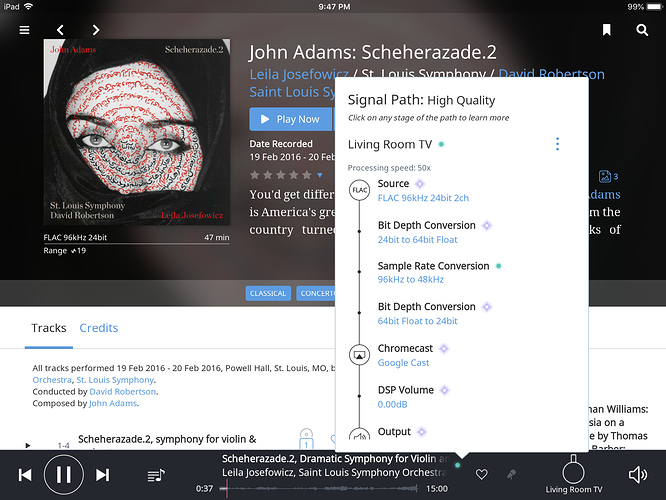 The only Chromecast device manufactured by Google that supports rates higher than 48 kHz is the Google Chromecast Audio.

The only Chromecast device manufactured by Google that supports rates higher than 48 kHz is the Google Chromecast Audio.

Perhaps. But the Chromecast (second generation) and Chromecast Audio internal hardware are the same – the difference is just the HDMI versus TOSLINK output.

Perhaps. But the Chromecast (second generation) and Chromecast Audio internal hardware are the same – the difference is just the HDMI versus TOSLINK output.

That may be true, but it doesn’t change what the product is willing to do, or the capabilities that it is reporting to us over the Cast protocol.

If you happen to come across someone who’s verified >48kHz bit-perfect output over HDMI using a video Chromecast, point us in a direction and we’ll figure out what’s going on. We put a fair amount of effort into figuring out exactly what these devices are willing/able to do…so I’d be surprised, but it’s always possible that we missed something.

To be clear, not a criticism, nor a complaint, just an observation. And, yes, Google very well may have put a software restriction on Chromecast sample rate support. But it should not be a hardware limitation.

In the Chromecast world, there are basically two categories of audio support: devices that report a “supports high res audio” flag and those that don’t. The ones that support high res (Chromecast Audio) will output up to 24/96 out of their digital outputs. All other devices (ie: the Home series of speakers and all the Google Chromecast devices with HDMI output) only go up to 48kHz. In the case that you supply either category of device with audio that exceeds the maximum supported sample rate, they will just downsample (by successively halving the sample rate) to a rate that they support.

Also, at least in the devices that we used for testing, TVs with “Chromecast built-in” functionality output at 48kHz, no matter what.

1 Like
Amazon HD Ultra, to DAC via Chromecast Audio - Only seeing 16/44
Getting started with Roon - should I get a Roon ready endpoint
High Res Audio with Chromecast not working
WiWavelength (Andrew J Shepherd) July 6, 2018, 4:27am #7

So, with the high res audio flag restriction on otherwise capable Chromecast hardware, Google seems to be employing some artificial product segmentation.

…like every other manufacturer does then. I think Google just made a common sense restriction to ensure the devices worked properly on most people’s crummy home networks. Apple do this all the time to ensure trouble free usage of their products in the home environment, so Google are doing the same.

I can confirm, I am running Chromecast Audio via Roon, using optical out to Mojo supplying a 24/96 Flac to it now, and it’s lighting up green on the Mojo indicating it’s receiving a 96khz signal.

A 192khz flac is downsampling to 96khz by Roon.

DSD files (DSF’s) are being converted to 352.8 then down to 88.2 and out to the Mojo, lighting up yellow/orange to indicate the correct bitrate.

All working as expected . Great job

The 24/48 restriction is limited to HDMI output Google made Chromecasts - and there are no HDMI input MQA DACs or receivers yet.

Interesting, when my app is updated I will see if MQA can pass through my TV to the optical output and onto my Bluesound Pulse 2 for an MQA decode.

Interesting, when my app is updated I will see if MQA can pass through my TV to the optical output and onto my Bluesound Pulse 2 for an MQA decode.

This is the signal path of Roon to my Chromecast Tv
Ok my error, try again 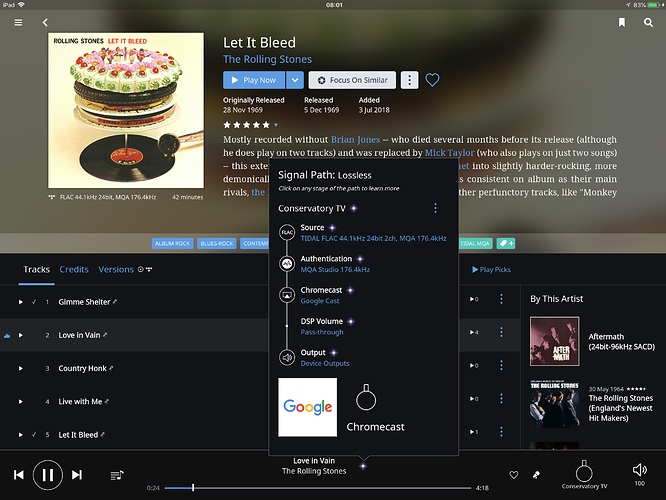 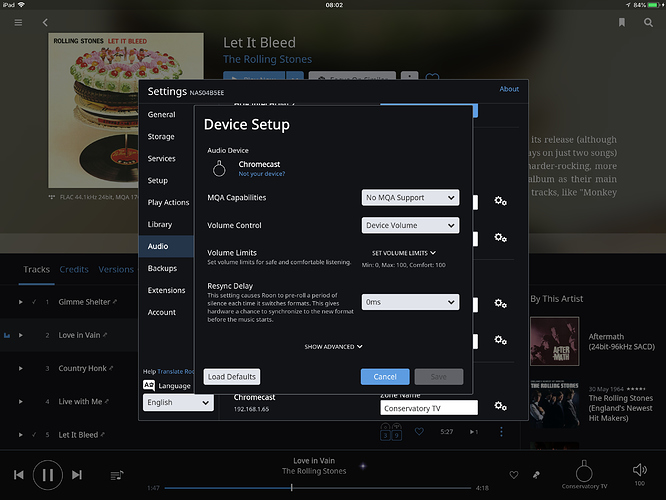 I don’t think the Bluesound is seeing MQA here, I think they need Roon to do the first unfold. I’ll need to do more listening but MQA sounds fuller bigger sweeter to my ears…

Wow this came out of the blue. Now I can set up a new bedroom system and have Spotify, GMP, Qobuz and Roon with Tidal

I don’t think the Bluesound is seeing MQA here

A lot of TVs don’t pass PCM audio unmolested out of their toslink ports. I have a Sony Bravia that outputs everything from its toslink output at 16/48, regardless of input format, with the odd exception of broadcast television, which outputs at 24/48. There’s little hope of MQA making it from HDMI->toslink cleanly in that case.

So if I want 24/96 and Roon’s album cover display, I can rubberband a Chromecast Audio to a Chromecastand group them. Still less than $100.

The cast device doesn’t care if we play audio or not…we can just as easily launch it + have it do pure display of metadata while the audio plays elsewhere.

For a lot of zones with a TV that happens to be in the room, that will be a much nicer product than the rubber band hack

And loop fan art for a nice dynamic display? That would be very cool. Maybe videos one day. I was surprised to notice chromecast is already looping fanart where the work (like an opera) has a long artist list. As ever though the quality of the art is often not great. But by the sounds of things all this has a focus now. Look forward to it.