Could Roon please add user customised filter under Composer? Most classical composers have hundreds of compositions. It is almost impossible to find one particular composition. It makes Roon unusable as a classical music server.

It’s a start. You can do this by filtering on composers and compositions from the composition screen. But it’s not especially intuitive and you need to know what you are looking for in the first place.

But I think it is time for a UI overhaul? So much of roon still has an unfinished, unjoined up beta feel. I don’t really understand the logic of having to swap between composer screens, album screens and composition screens. I would expect it to be all in the same place, especially if I don’t know what I am looking for. Roon for me is primarily a tool to discover hidden corners of my library but I find the interface works against that. It would be really nice to see that composer screen with a complete overhaul with compositions grouped by form and/or instrumentation, some kind of search filter, and also the albums displayed as well.

My vote would be by Album first.

For example, select a Composer then see all the albums of that Composer, then a means to filter that , say Genre

What use is Composition say for Chopin, I select a specific Waltz and get 3 mins of music, more likely I would select an Album of waltzes. The same goes for a lot of works. Composition is nice if you want compare all your Moonlight Sonatas but is too granular for normal listening navigation IMHO

classical music is 2% (?) of the fysical market? I rest my case.

Audiophiles make up 2% (?) of the people listening to music… still there is discussion about DSD and Hi-Res…

What do you want to tell us? To stop discussing things like this?

if that’s an option: do

it’s not about you or Roon, it’s about the music.

I can tell you metadata of classical will always suck. I tried Roon as a owner of 2000(?) ripped cd’s…Roon didn’t fail…I was too optimistic.

For me it is not about the Metadata itself but about the DB structure and display within Roon. I have around 10.000 classical Albums in Roon and I also know that classical Metadata always will suck.
That‘s why I keep maintaining my metadata in my file tags…

Tag everything manually. I use MP3Tag. Then you can search by composer name. The “Album” column in this screenshot gives me a path to every album I have by typing in the first few letters of the composer’s name with the Roon view in “Sorted by Album Title”. 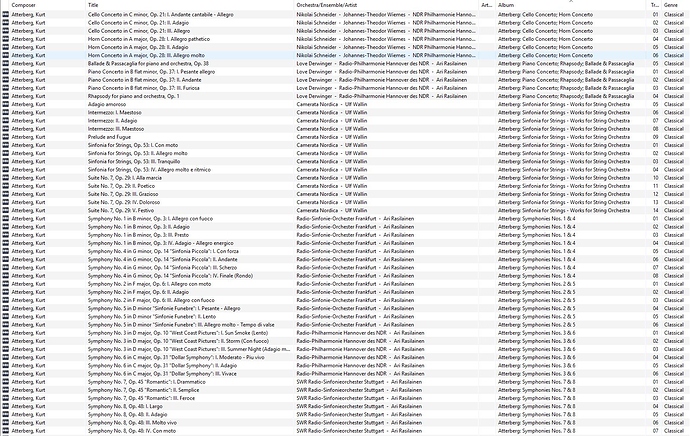 Its always going be horses for courses …

I have all my classical stuff tagged and manually tagged down to individual Composition in my Pre Roon system believe me that was many hours of labour .

So clearly I agree that composition is an important aspect of classical music, but it shouldn’t be the only way to select and navigate music. My point is that Roon as a software concept seem to be centred around the Album as a “package” but for classical music it seems not to be.

Composer>Genre>Album PLAY does. I have my library still current in my pre - Roon system and that is how I do it there and it feels right and above all quick to find a specific album.

Each to his own I suppose, all I am asking for is an option to do it otherwise. Indeed in Roon there are nearly always several ways to skin the proverbial cat , except in the field of classical music.

I don’t want to have to maintain 2 systems to get the navigation i want it is quite painful where a change to one impacts the other , let alone the additional computer time at the expense of LISTENING time

On initial load Roon sorted the metadata for Rock and Jazz about 99% leaving only a few odd balls “Unidentified”. Roon’s metadata sources seem better suited to these genres

Classical was another story. The metadata sources Roon uses I am sure are the root cause , Classical Metadata in general is poor and often inaccurate, for example placing Ludwig Van Beethoven as the ARTIST rather than Alfred Brendel (this is unfortunately too common)

Classical music may be a small proportion of the market but as far as listeners go and I suspect the audiophile end of the market they still represent a good proportion. I learned to love classical music when I was exposed to it at university , I have loved it all for the ensuing 50 yrs of my life in the same way I could still be referred to as an aging rocker. I have very wide tastes in music “Bach to Led Zeppelin and Bach again” !!

Just because we don’t fit in with the more mainstream styles of music doesn’t mean that Roon should not cater for it . I don’t wish to be rude but writing classical lovers off as just an odd 2% seems a little harsh, each to their own.

I have actively been canvassing this forum for changes in Classical music navigation since I started using Roon, I even gave up my membership at one stage because of the frustration, but I came back mainly because “you cant change something you are not a part of” so I suspect I will continue to chirp on this subject until I get some traction.

No Offence meant or taken

What did the guy above say – Its all about the music – Keep Listening !!

I do the same but in JRiver. I still maintain 2 libraries which adds a bit to the confusion

I’ve managed to miss this. Where are you doing this in roon? Is that from “Tracks”? I cannot see how to add a genre column and roon displays all my composers as “first name, lastname”, Not “lastname, first name”.

That image is Mp3Tag not Roon?

Yes it is. Sorry for the confusion, I should have made that clear.
In response to @tripleCrotchet: to begin with, I set up Roon to display composers on a Last Name, First Name basis but it was only partially successful for some reason. That MP3Tag screenshot shows the Last Name, First Name convention because I needed it that way for my previous system, which used Asset, to work properly and because I found albums’ built in metadata was inconsistently formatted and sometimes just plain wrong or even missing. It also meant that every album’s information would be displayed in a completely uniform and consistent way, which is a sort of OCD thing for me. When I first got Roon I had major difficulty getting it to show things the way I was used to and it took me a while to realise that it was never going to using the Roon metadata. I then edited my entire Roon database to “Prefer File Data” and “Disable Multi-Part Compositions on this Album”. I did the first part in chunks by selecting and editing large blocks of albums. The second bit can’t be done that way so I do it on a per album basis as I listen. Laborious I know but it gets me what I want in terms of how albums and track data show up. If I hadn’t tagged everything manually as I ripped and downloaded my way to a library in my early days of streaming, I suspect I’d be as frustrated as you about how Roon displays classical music.

Understood. I have found myself migrating on an album by album basis as well. I certainly have not found that roon has reduced my manual tagging effort. There is a long way to go but to a certain extent I can rely on sunk effort that in my case goes back more than 15 years to the early ipod days.

But I think I am coming from a different perspective. I actually prefer roon’s “hyper-linked” approach to more traditional tabular views and I was initially quite excited when I saw roon for the first time. But my experience has been that getting that more “visual” view on a library to work properly requires a considerable manual tagging effort above and beyond what I used to do with more traditional tabular library managers. Otherwise there are a lot of roon specific problems like dead links, duplicate links, equivalents miss-matches etc. Most of the artist and composer artwork is also either missing or not formatted properly because there is no consistency in aspect ratios from view to view. It all adds up to a considerable effort and I gave up on a “batch” migration to roon a long time a go.

But investing in getting the roon UI to work also requires buying into basic roon dependencies like “first name, last name”, “multi-part compositions” etc. I still think that there is a place for multiple views on a library, including tabular views. But that often requires a different logic (last name, first name being an obvious example). What would be nice is if roon could revisit some of the tabular views that it has implemented with that sort of reasoning in mind and find a way of more closely integrating composition, album, composer, style, period views in one place. I’m not hopeful though. The UI used to have a priority but no longer it seems, especially with Classical which now seems to be viewed as some kind of edge case. I’m not so sure. I think that improvements in the more complex navigation required by genres like Classical in terms of grouping, association, discovery etc. could be reused to enhance the performance of the “radio” and “discovery” features with benefits to the roon user base more generally.

Hi @tripleCrotchet
It’s horses for courses I suppose. I’m not particularly concerned with Roon’s hyperlinks and I’ve discovered a lot of them don’t go anywhere in any case. I’ve even found that a lot circle back to the album from which the hyperlink was clicked in the first place! I prefer the uniform and predictable layout that my approach has given me. The point being that my neural wiring seems to be a bit odd, insofar as I find the Roon default multi-part and hyperlinked way of doing things somewhat chaotic and random which gives me a feeling of having an itch I can’t scratch! Tabular uniformity sits much better with me.

I’m curious. Don’t take this the wrong way, but why do you use roon? What’s in it for you? It sounds like a lot of manual effort to get a view you probably already had in whatever you were using before?

My excuse is that I actually try and get those links and the roon UI in general to work. Mainly what’s in it for me are improvement’s in radio and discovery performance. But it’s a task without end and there remain a lot of well documented problems with both radio and discovery.