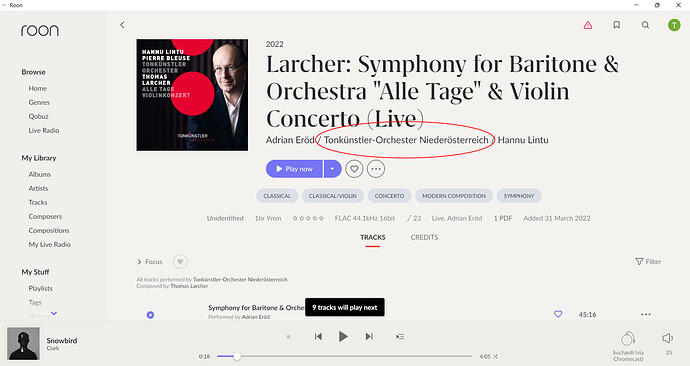 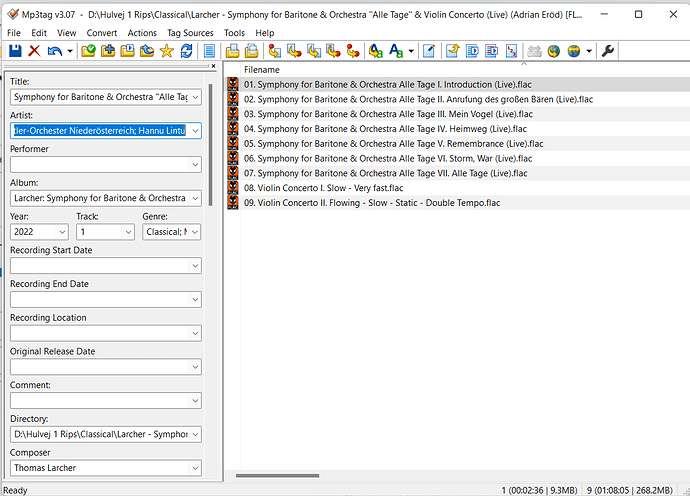 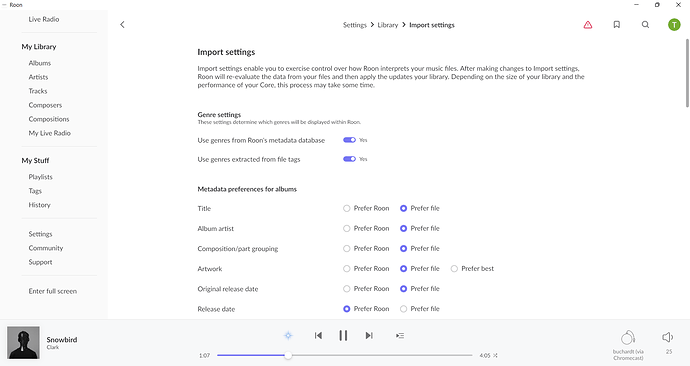 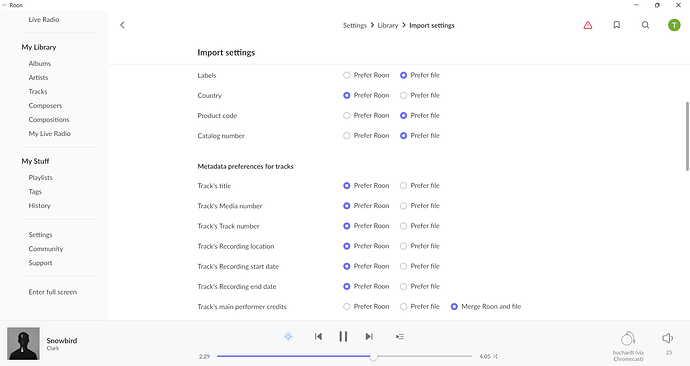 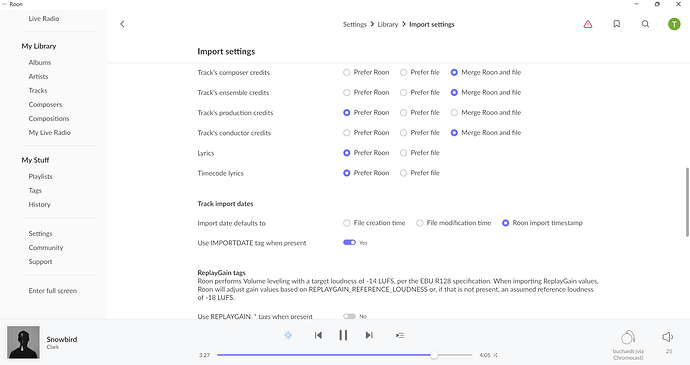 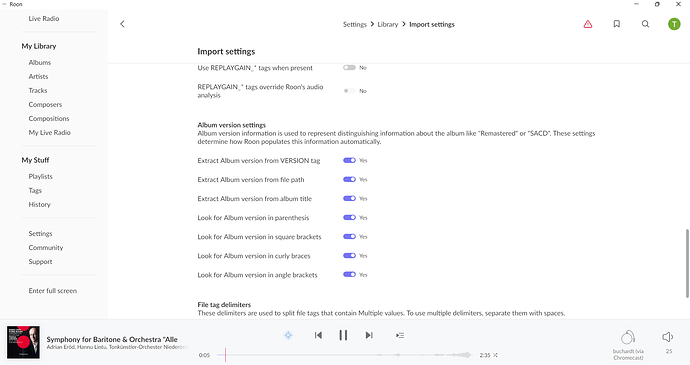 This may be a formal legal name but the Orchestra themselves on their websites and self-produced albums use this shorter form, which is what I also initially used in my tags:

Have you tried looking under “credits” and clicking the link in there?
I do not have the same view as you do, it just lists it as “Various Artists”: 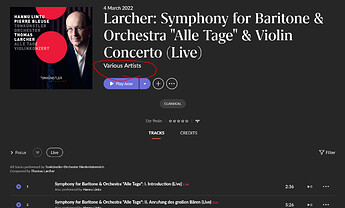 So I have to go to the credits and click the link there and it works for me: 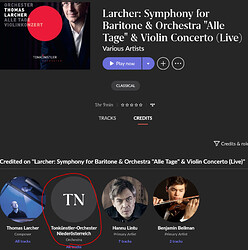 This seems like maybe a local database error? Just guessing here as I am just a user.

Thanks, tried that, same problem.

I have ended up having to restore a backup from before I was trying to import this album and then deleting all references to the long form “Tonkünstler-Orchester Niederösterreich” I could find in my library. Roon seems to have a lot of variations on this name and I merged them all into “Tonkünstler Orchestra” as that one seemed to reference the most albums etc.

At least now I cannot freeze roon by clicking on the wrong link. It’s not really a solution though as it seems strange that a single variation on the name of this orchestra can freeze roon (or at least my copy of roon).

Can you tell us where you were running into this? Was it just on one particular remote or was it reproducible on other remotes? Or were you seeing it on an all-in-one Roon Core?

I have two separate environments. The one at home is more complex. At the summerhouse where we spend 90% of our time these days (and where this case arose) I just use roon core/remote on the same laptop. But to be honest I don’t really understand your question. I am not keeping records so I have no means of rolling back the core to a known state, so without some very detailed instructions I do not know how I would go about reproducing this case.

If it helps, it has happened before with a few different artists which is why I was driven to post this time. But I am not keeping records. I think it is likely the issues have probably always been there in various equivalencing tables. What is different is that I am motivated to edit and merge virtually all my Classical artists. Recently for reasons I still do not understand roon introduced a blanket renaming of artists from their International English forms to their Native Language forms. I have no idea what the Czech, Finnish or Icelandic forms of quite famous artists are and they can be so different to their anglicized forms it is impossible to guess. Consequently, every time I encounter an artist like “Radion sinfoniaorkesteri” I go to the artist editor and change it to “Finnish Radio Symphony Orchestra”. This is an easy example, but they can be very difficult to decipher. There are all sorts of reasons why I would want to do this but an important one is that where there can be hundreds of performances I will seek out a Finnish orchestra for Saariaho or a British one for Elgar or an American one for Barber for that matter.

No doubt I will encounter other equivalencing anomalies like this over a period of probably years as I am not re-editing my library systematically. Just as I go along.

I am motivated to edit and merge virtually all my Classical artists. Recently for reasons I still do not understand roon introduced a blanket renaming of artists from their International English forms to their Native Language forms

Hi @tripleCrotchet That’s exactly what I’m doing as well! What on earth moved Roon to change all these names I can’t fathom. It’s one thing to allow users from Iceland and Norway to use native names for their orchestras and at the same time store several international versions of these names in the database as aliases so all roads still lead to Rome. But now they’re forcing me to change a lot of orchestra names for no good reason at all.

As posted elsewhere my Windows remote systematically crashes upon loading the Artist’s page of the Academy of St Martin in the Fields Chamber Ensemble. I would like to try your suggestion of merging this ensemble with another non-crashing one but do you have a suggestion as to how to go about doing that? Did you perhaps first create a new ensemble artist? Thanks in advance.

EDIT: I just realized that merging a ‘crashing’ artist with another I would probably have to choose the newly created artist as the primary one, thereby losing all info on the relevant artist. That would be a bummer. How did you solve that, Tony?

I am pretty sure this all started when roon changed all the artist names. I have so many artists I cannot pronounce or even have the vaguest idea who they are. I am pretty sure that the default for the various St Martin-in-the-Fields ensembles was changed from hyphenated to un-hyphenated so although the change in the name is subtle compared to some of the changes (changing from English to Finnish, for example) there is still a change and something went wrong during that changeover that is resulting in these crashes.

St Martin-in-the-Fields ensembles was changed from hyphenated to un-hyphenated so although the change in the name is subtle compared to some of the changes (changing from English to Finnish, for example) there is still a change and something went wrong during that changeover that is resulting in these crashes.

I hadn’t even thought about the dehyphenation but you might be right there. Still it’s strange that the crashing only occurred on one PC in my household…

What on earth moved Roon to change all these names I can’t fathom.

It’s incomprehensible. From a few posts by roon there was a few prominent inconsistencies. For example, the English form of Berlin Philharmonic Orchestra was being used whereas the German form of Weiner Philharmonker was being used. Now all have been changed to their native forms and it is a complete mess. My guess is that in many cases the native speakers do not know what the native forms are and neither do the ensemble members most of which consist of foreigners these days!

In many cases the local form doesn’t even refer to the local country as that is redundant information to a local speaker. For example, try and guess this one

It is probably a radio symphony orchestra of some sort, but what station? What country? As it happens it is Finnish and the international English form is:

No one could guess that unless they are Finnish speakers.

I have 7,215 artists and will be changing a good number of them. What a completely pointless pain.

Now I know you are doing this as well I have a horrible feeling that changing all the artists back to their anglicised forms is what is causing these crashes although the artists that are crashing are different in each of our cases probably due to other differences in our libraries.

Now all have been changed to their native forms and it is a complete mess.

Perhaps the reason behind this is some form of über political correctness? So Roon can’t be accused of spreading a modern-day Pax Americana?

By the way, my own approach to naming orchestras is in itself somewhat inconsistent, I have to admit. We are a small country so years ago I have grown accustomed to the fact that Het Koninklijk Concertgebouworkest is much better known under the moniker Royal Concertgebouw Ochestra and that their own cd label is called RCO-Live, not KCO-Live. But Het Orkest van het Oosten (now superseded by Phion as a result of yet another fusion…) was internationally called the “Netherlands Symphony Orchestra” (sic) but that is such a vague description for an orchestra that has its base in Enschede (almost Germany!) that I decided to rename that one to “Orkest van het Oosten” so I at least know how to find it! Interestingly Roon should have done that themselves in their latest effort if only to be consistent. But perhaps their reasoniing was that “Netherlands Symphony Orchestra” was an official name used by the orchestra itself?
Confusing!
All in all I’m glad we Roon users are free to choose whatever name we like.

I have grown accustomed to the fact that Het Koninklijk Concertgebouworkest is much better known under the moniker Royal Concertgebouw Ochestra and that their own cd label is called RCO-Live, not KCO-Live.

That’s interesting. I suspected as much. I wounder how many native Dutch speakers like yourself even know who “Koninklijk Concertgebouworkest” is, especially as the marketing and label etc. is all RCO.

Well, as you might have gathered, I certainly do! As a matter of fact, I vividly remember owning a number of LP’s (in my early days as a record collector) with just “Concertgebouworkest” on the cover. Not even royalty back then! Only in 1988, at the end of the Haitink era the orchestra was crowned royal.
Which bringes me to the subject of orchestra renaming. Every orchestra that means something in this world seems to feel the need to change its name every two decades, either for marketing reasons or because of a fusion. Roon obviously only allows for one name per orchestra so if I were to feel the need to rename the RCO to CO for all recordings made before 1988 it couldn’t even be done.
For the RCO that’s not a problem but there are so many orchestras that I’m less familiar with. And with those I often don’t know which name to choose…