Community Poll! How should we name our albums?

By “name” I mean the text that goes into the album’s “title” field in Roon. Take this album for example: 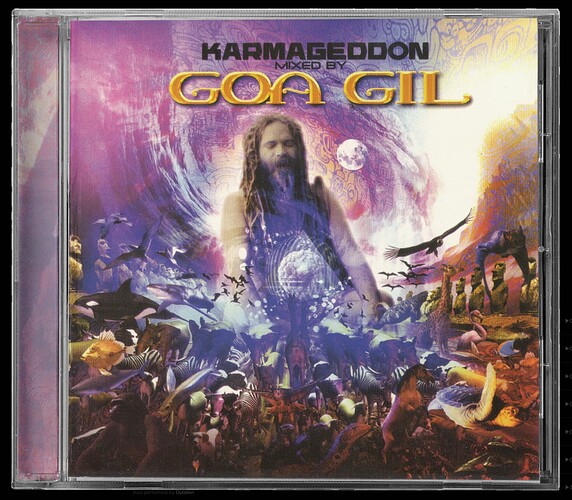 For clarity, this is a compilation album and a mix album - there are various tracks all by different artists, and Goa Gil is the DJ who has chosen the tracks and mixed them together.

A potential issue with this album is that the text is all in capitals - leaving it to the user to decide how to capitalise the text in Roon.

How would you name this album, given the text and layout on the cover? Which of the following should it be? Please choose from the poll below!

If you have a suggestion that is not in the list, please enter it in a reply below; I will then add it to the poll and you can vote for it!

Also, any particular principles to follow when naming albums? Please put those in a reply below too. One thought I had is that the album title in Roon should match exactly the name on the album cover (where there are spaces or other unique formatting that doesn’t translate to text, this can be tricky). But should we following capitalisation rules, even if the text of the album cover is all in lower case for example?

This is a useful reference for capitalisation rules in titles:

Knowing the right way to capitalize your title depends on which style guide you’re following. Major style guides—such as the AP Stylebook,…

Number 2 would be my choice

@Glimmer I’ve turned it into a poll - please add your vote!

If you have a suggestion that is not in the list, please enter it in a reply below; I will then add it to the poll and you can vote for it!

The Karmageddon example isn’t general enough to address all album naming dilemmas as the title isn’t long enough but there should be an option:

Many genres, especially Classical do not really have an “album title”. Instead the cover is usually just a very noisy “splash” of primary artists and works. I don’t remember now, maybe it was in v1.8, that roon introduced a very large font for the album title that line-breaks in a completely random and unpredictable fashion. Frankly, it is often unreadable. That means that a general strategy of using the album title as it appears on the cover art of Classical and other genres is not really practical. Take this example: 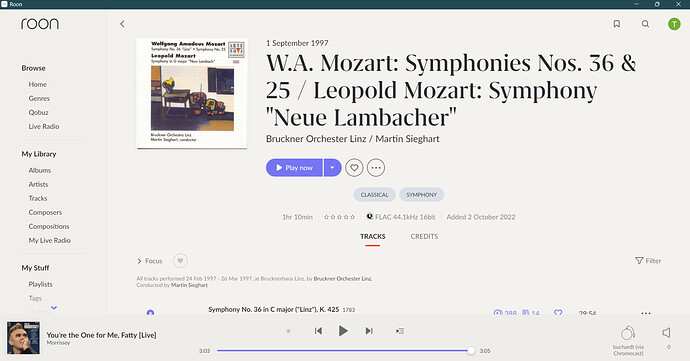 Quite a mess. So my preference is: 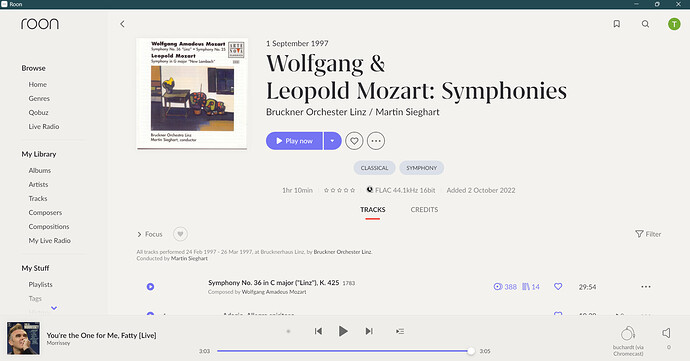 Still a mess because I would prefer that the line breaks after “Mozart” and not after “&”.

In general I prefer an uncluttered screen. All the detail about the Symphony opus numbers is completely superfluous in the title as it is clear below in the body of the album screen. I don’t know how you could generalize the choice of album titles with Classical and several other genres as it needs to be done on a case by case basis and is really being driven by roon font size choices and the randomness of the line breaks.

This is just a random example that came up when I browsed my albums. But it can be worse and is certainly widespread throughout my library.

A good point here - classical music is kind of a law unto its own. I suppose I would tend to exclude classical music from this poll for that reason. I plan to address that further down the road.

Some relevant points that you raise though. “Whatever fits” is an option, though personally I prefer to have a system so that there is consistency. Classical music however may need a different system - and maybe yours is best for that.

It’s a shame that line breaks need to affect how titles are added. Ideally there would be some option for Roon to allow the user to edit the line breaks or perhaps font size.

So Led Zeppelin III Is GOOD

Album = Karmageddon,
Artist = whoever performs the individual track
Album Artist = Various Artists (some software requires a common AA to collate as an Album, your remember JRMC ?)

How you indicate the “mixer” is quite difficult as there is no Tag for it . Maybe Arranger

BTW a poll is not really going to help, no matter how many options you provide as there so many ways of skinning the cat .

Also defining an ‘odd way’ is no use as Roon will add what it gets from its 3rd party sources which Roon or us have no influence over.

It’s a manual adjustment if you feel that brave.

I probably danced around the point. “Whatever Fits” is not meant to be a systematic option. It’s really a consequence of roon font size choices. It used to be possible to be more systematic and “accurate” about the album title as the fonts were smaller. That is often no longer really an option. But to be honest, what on earth use does a paragraph long album title serve? It’s not practical to type it in as a search term and in browse mode, roon has to severely truncate such album titles in the few places it works in a list mode.

How you indicate the “mixer” is quite difficult as there is no Tag for it . Maybe Arranger

There is another thread where this came up. It turns out that roon does have several “DJ Mixer” performer roles and also several “CD Compiler” production roles you can manually edit in your credits. Sometimes they are coming through from the metadata suppliers but its a bit hit and miss. Many of us are probably using common credit roles like “guitar” or “piano” etc. but roon supports thousands (6k plus I think).

I just saw the other thread, maybe a mid should merge them , if that’s possible as one is a Poll

Correctly? I think this comes down to personal preference.

And, for me, the title is simply “Karmageddon”, where Goa Gil is the release (album) artist, and for the tracks, I’d add the individual artists, so they appear as Performer under the track title. 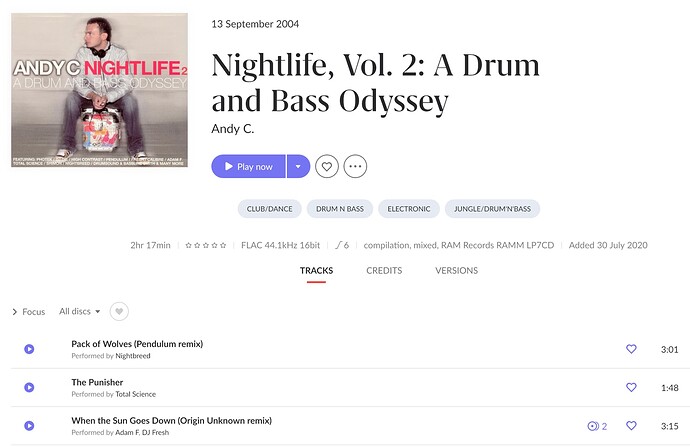 I usually ignore the artwork, as this is done for aesthetics by a graphic designer. If I followed the artwork here, the title would be “The Best of: volume 1” or worse! 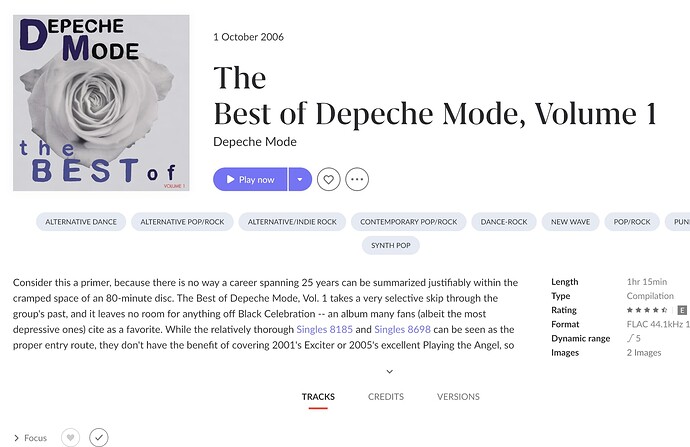 Incidently, I dislike the layout inconsistency on the albums screen when I add

Interesting to hear yet another viewpoint! So the album artwork and text on the album cover doesn’t come into it…don’t know how I feel about that one! How else are we to determine the album title?

And yes, the title of that one would be “The best of, volume 1”.

@Martin_Webster , your post made me think a bit more. What about utilising the “compilation” toggle in Roon? You could then, using this album, have the title as simply “Karmageddon” and the album artist as “Goa Gil” (if we expand the meaning/remit of the album artist field). That would seem the cleanest approach?

With this and the Andy C example, they are mixes, so not strictly compilations. So, I tend to add the relevant information in the folder: Drum and Bass Arena (Compilation) (Mixed) (React REACTCD240.) In contrast, the Depeche Mode release is a compilation.

As for artwork unreliability, here’s a few more:

On some albums, The Best of precedes the artist’s name, so the common title is The Best of <Artist>. When presented the other way around, it’s just The Best of because the artist or label didn’t want the artist name repeated.

But roon’s treatment of Classical is riddled with these album art display inconsistencies. Its how roon and Classical works.

I regularly edit album titles but then I don’t really use them much for navigation so I have not found much downside. For others, there may be different priorities.

With this and the Andy C example, they are mixes, so not strictly compilations.

If you own the CD and would like it to “identified” by Roon once you rip it and place the files in your library here’s my suggestion for naming the album:

Note this method does require subscription to both Tidal and Qobuz.

Do a Roon search for “Karmageddon” (which I just did) and see there are any results.

In this case there are indeed some results and the album “Karmageddon” by the artists Goa Gil is among the results. Clicking on the album shows that the album is available on Tidal named Karmageddon, with the album artist as Goa Gil.

But don’t mixes come under the over-arching category of “compilations”?

As I said earlier, it’s about personal preference. Since a mix is a unique recording, I don’t consider these a compilation… unless it is a collection of tracks from other releases.

Really interesting spread of votes so far! And I’m glad to see that the top vote is in keeping with my revised way of thinking… 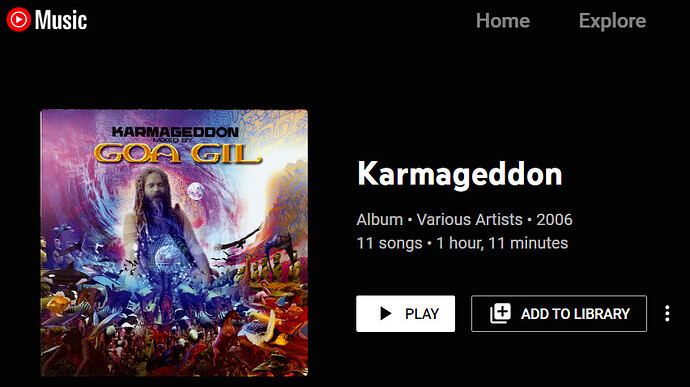 So yes, I think this should conclude. I believe major streaming services get metadata directly from publishers. And what publishers provide should be THE correct answer.

But if THE correct answer is not what you like, just change it. Your Roon library is your personal library, so it can be opinionated.