@Craig_Palmer - I appreciate the tips. I have not done any meta data editing yet. I may in the future. I wish Roon had a list view like MediaCenter so you can see a lot of the meta data for each album at once - perhaps there is a way and I have not yet found it.

Not related to this thread but, a person is about to arrive so I can audition a set of speakers. It seems each time I upgrade my components, I like my old speakers less (they are about 35 years old :-)). I will try some ripping later.

I have been running XLD for about 20 minutes on a CD and it is not even1% done. How long does it normally take for you to rip a cd with this software? These are the settings, I did not change anyhthing: 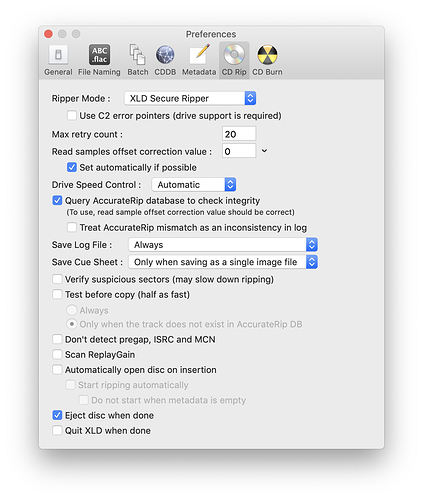 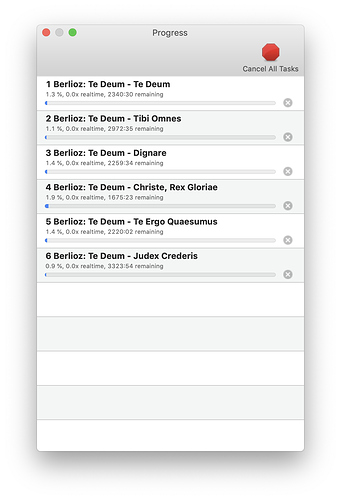 Yea. The idea of fast ripping and 100% assurance you have a bit perfect rip are at complete odds with each other…

Yes, but at the rate it was going, I calculated it would take 40 hours per CD which is just broken. I just came back from buying an LG drive that I will connect to the Nucleus. I will give that a go. An important point to remember is that almost all the CDs I am going to transfer were from the 80’s and early 90’s they sound terrible. I am sure the Chord can help some but in the end they will still be terrible source recordings.

Hmm. That can’t be right. My setup took a couple of minutes per cd with XLD.

The CD Reader directly connected to the Nucleus apparently works. I say that because I could not see anything on the UI that indicated it was working ( the light on the drive was blinking). It seems to read the CD a bit faster than playback time so that is OK.

The software places the CD the CD-Rip Directory, no notices on the UI when done, nothing. Perhaps this is a good thing. It just works and the CD appears in you library.

As to sound - I am not sure it is any better, but I have not played with filters for CDs yet.

You need to refresh to get an update on the admin page.

In another thread, I posted that accessing the device (Nucleus +) directly over the network instead of the Roon UI but typing the IP address of the device, works fine.

Thanks for the update. I did the install and while I have already ripped all my CDs, I plugged in my super drive to the Nucleus plus and it was instantly recognized. Well done. Thanks