Compilations - do you add each artist as "Primary Artist" for better search results?

I have (belatedly) realised that if you go into Artists and search for an artist which brings up the albums/singles etc for that artist do NOT include individual tracks on a compilation.

For this you can of course go to Focus and search that way which then include the compilation entries.

However, do you add each artis as a Primary Artist in the metadata settings on a compilation album?

I nearly started a thread like this a few months ago when I realised that the albums I had recently purchased were not showing up in the bands profiles.

I haven’t yet found a solution to this problem, so I will be interested in what others have to add as well.
Thanks for starting it

Something is wrong with metadata on your compilations? 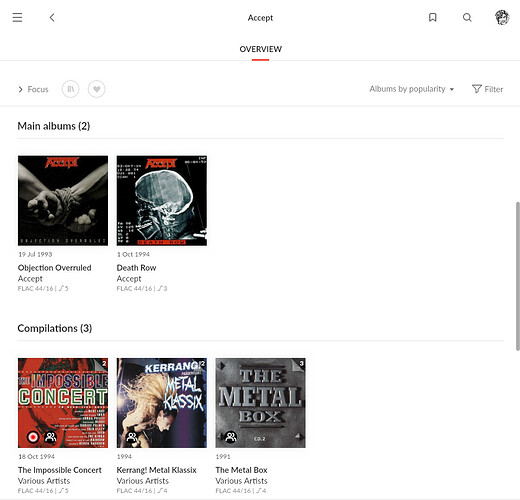 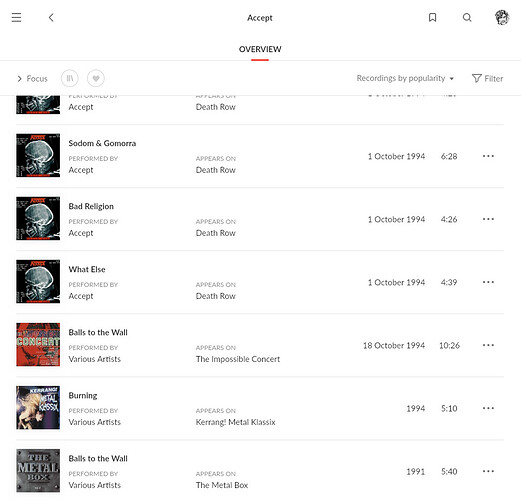 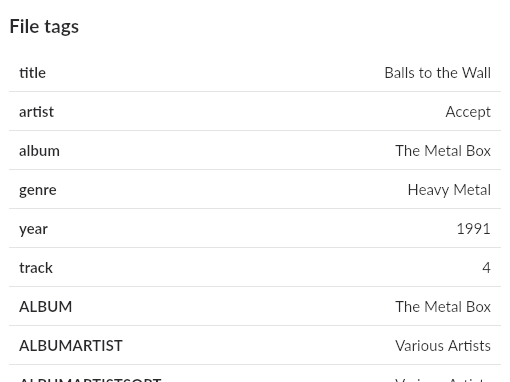 You’re talking about streaming content that is not in your library? Other details you probably missed to share?

Hmm that is curious.

The compilations missing from library when searching under artist is in my local library.

Can’t make sense of it.

OK - to get to my local compilations under a particular artist I have to click in to DISCOHRAPHY and then focus by my library.

Should it be that way?

Would be nice to see ALL relevant albums in my LIBRARY (local or streaming) in the OVERVIEW section.

Discography is a feature related to streaming services, so I can’t comment on this. What about Overview? Does it not show for you?

I have a few Whitesnake compilations for instance but there the Primary Artist is Whitesnake so those show up under the Artist search result, however not grouped under a Compilation section like in your screenshot.

So for me it seems there has to be a Primary Artist for EACH artist under a compilation to show up - that’s quite a job to add to each album.

Sorry but it seems I can no longer follow you. How about you present some screenshots of a real example that depict your issue with Roon?

Hi @BlackJack While waiting for the OP to post I will try to add what I see.
I have quite a lot of compilation albums and none of these show up against the artist’s . If I pick the band Fashion (as I only own one of their albums so it makes it easier to show) 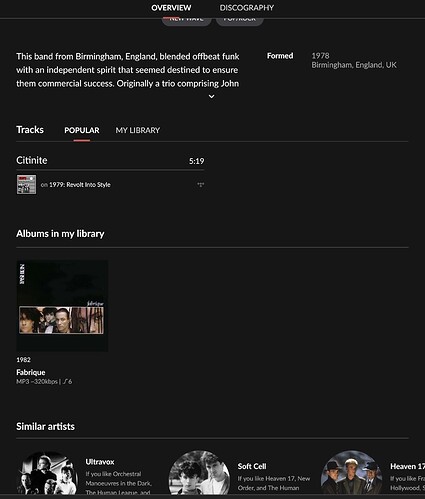 I have a few albums like this one below that have songs from Fashion on (same for the other bands shown, but I have lots of albums by those). 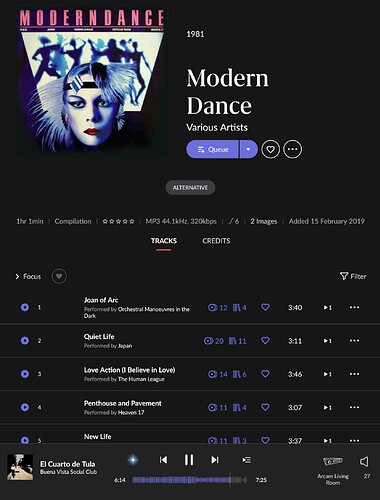 It would be good to see these show up in the library. What do I need to change, as I have never been able to find it. I played with taking the Various Artists album artist out, but that broke Plex as they became 15 albums or so.

For users without streaming services active there is just OVERVIREW. There are no tabs for Tracks, POPULAR or MY LIBRARY beneath. 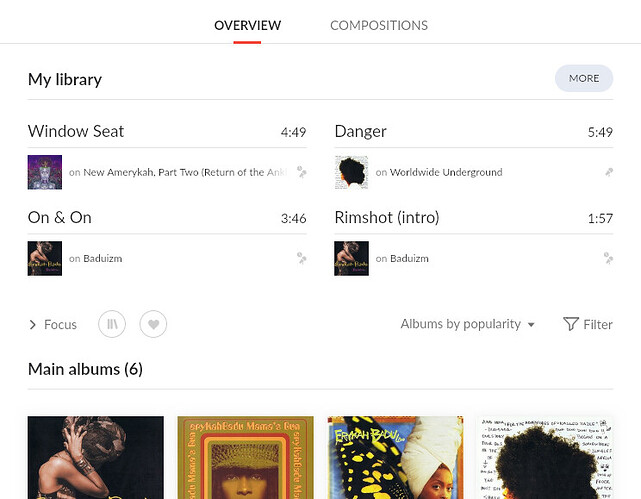 IDK but maybe the same as your MY LIBRARY tab? That is where I would start looking for. While I can’t see the same tabs as you, your screenshot is from the POPULAR tab and I’m pretty sure that this compilation, or any VA compilation for that matter, does not count as a popular work for the artist in question. So your expectations are probably wrong in this example – but to be sure we would need official confirmation.

Thanks Blackjack they are not displayed in any area that I can see.
Maybe they should not be displayed, but it seems logical that they would. I’m sure I have some showing, but maybe they are not flagged as compilation or with the band various artists. Given that this is an album view, maybe some of us just misunderstand how it is meant to work (I am quite possibly part of this).
I only got interested in it as I started buying some quite large anthology album’s where there are quite a few track’s by bands that I already have and none of it showed up.

Any chance of a comment from @support on this as a pointer in the right direction.

So @BlackJack I found something while looking at PlexAmp that I think works perfectly and I thought it was what Roon was meant to do. 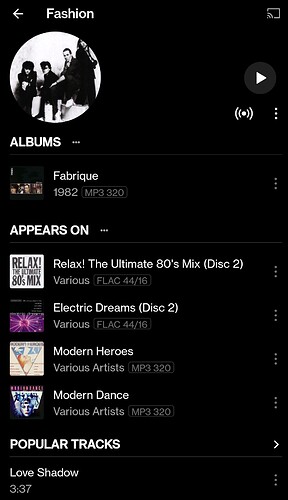 Like aroon it gives main albums, live albums and compilations. Then it has appears on as well and for some of my favourite band’s that might be an extra 20 album’s where a track is hidden. It works well on PlexAmp and it’s the same data files as Roon. 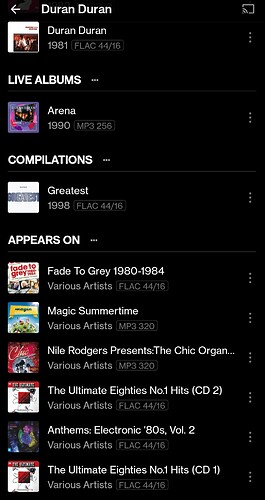 And some artists have this information (see Charlie Parker) 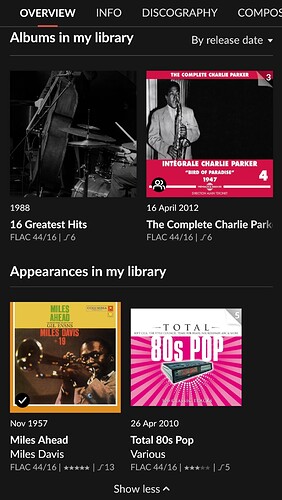 Your Total 80s Pop album is not marked as compilation and therefore wrongly (by Roon’s definition) displayed in Appearances instead of Compilations. As you write that you get what you’re looking for with some but not all artist, I would look into specific albums/artist, working and non-working ones, to try and find out what the difference is. Does the Total 80s Pop album for example disappear if you mark it as Compilation? At least in my library I was unable to find a non-working example so far but again, I also don’t use streaming services.

I did that about an hour ago and it stayed there (and is still there), so i looked at it and it is flagged under the album Artist name Various as opposed to Various Artists

I would say that most compilation albums do not show up, so this is probably related. There are a lot of discrepancy on what is flagged as a compilation album in Roon. As I have been updating these to (in my mind) be correct, they have probably disappeared from showing up.

Some artists like John Legend and Alicia Keys have a fair number of appearances in my library, but none are Compilations.

This may be a feature request if we can get feedback from Roon.

I did that about an hour ago and it stayed there (and is still there), so i looked at it and it is flagged under the album Artist name Various as opposed to Various Artists

I would say that most compilation albums do not show up, so this is probably related.

For sure it is – the artist name “Various Artists” is treated special in Roon. Not using it is definitely creating problems for Roon’s algorithms (you asked for trouble, so you get some).

This may be a feature request if we can get feedback from Roon.

Search for Compilation in the feature suggestions category of the forum and you will find out that there are already several. The metadata providers are the ones that mark all sorts of albums as compilations. AFAIK count “Best of …” compilations as main albums, tracks on “Tribute” albums (VA compilations but credited to a single main artist) as Appearances and tracks on VA compilations as Compilations (as seen in my library).

@BlackJack I always appreciate your input when reading thread’s.
I might do some testing today or tomorrow and come up with a scenario that then works and I will feed back. Last nights testing did give me some ideas of what might work.

I don’t seem to be having any issues with this at all.

I’ve checked on a few albums marked as compilations in my Library, some Local and some from Streaming Services. Whether the artists are marked as a primary artist or vocals/instrument player etc their contributions are outlined under their artist profiles, normally under discography in the following areas:

and sometimes under Overview in the following area: 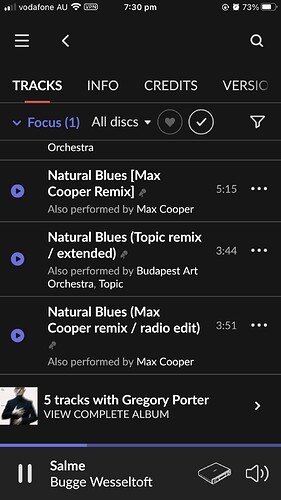 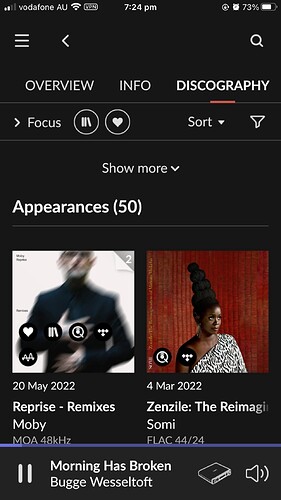 This one shows Gregory Porter under credits of Moby Reprise. Not as a Primary Artist but simply as “Vocals” on 5 Tracks. These were then shown as above. 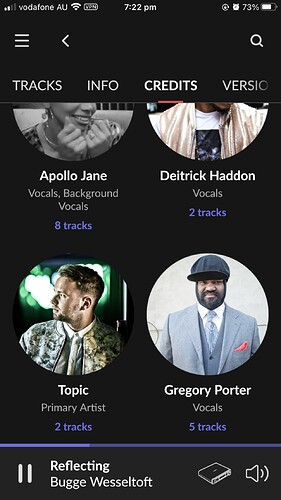 Local File from CD Rip was similar. One I checked was Album - Sun Fun & Music. Artist was Gary Pucket and the Union Gap. He shows as Primary Artist on the Album Credits and the Album shows under his Artist Profile. 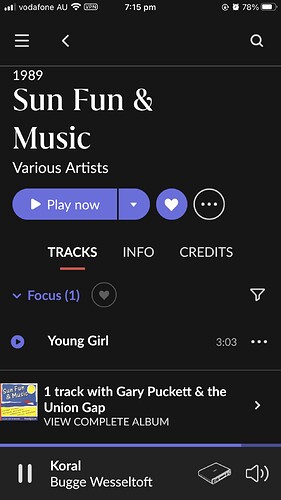 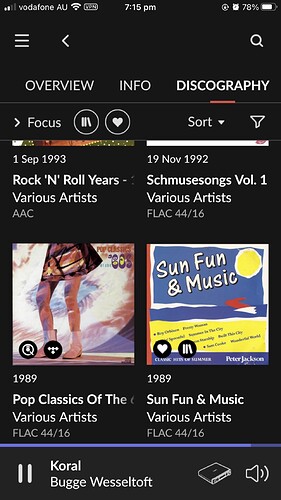 The list of appearances on the Artist Pages can be quite significant numbers to look through. For example Gregory Porter on his Discography Page has 50 Albums under Appearances and 117 Albums under Compilations.

Hope this helps in some way…

I have plenty working but almost none from compilation albums.
Are you seeing those?

I’ll check to see if I have a Various Artists in there.

@Michael_Harris Yep all seems fine. Just checked a few of my ECM Various Artist albums and links to Artists and Participants are all there. 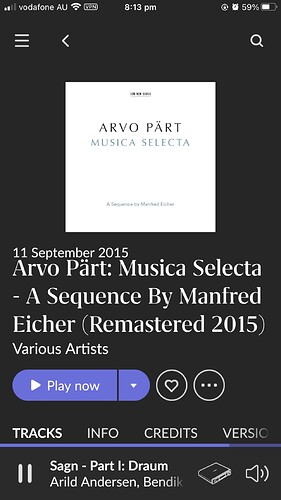 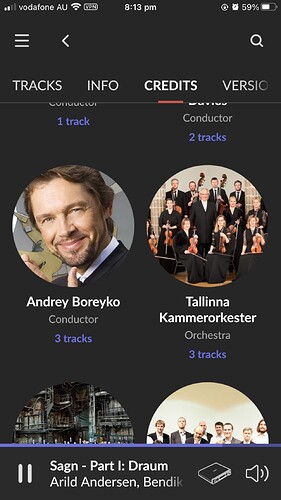