I’ve been working on cleaning up my meta data issues as it applies to linking instances of the same song on different albums. I have found Roon is inflexible when it comes to the composer names and its ability to see instances of the song as the same. This has always been an issue with Roon for the 2+ years I’ve been using it, with each release I hope there is a fix. Here is an example:

The song Cassidy composed by Bob Weir and John Barlow. Sometimes it is stored with the composers listed as Weir, Barlow; sometimes as Barlow, Weir and other times with both first name and last (e.g. Bob Weir, John Barlow). Roon can’t seem to see these different instances as the same song and refuses to link them. My only solution is edit the song meta data (Metadatics) and make them all consistent. Though this might seem a slight inconvenience, it is rather frustrating when there are 30+ instances of the song in my library.

Hello @rayski — Thanks for sharing your observations with us here, we appreciate the feedback!

For the Bob Weir and John Barlow example you provided above, there may be some manual editing required in Roon to get this working as you’d expect, but we need a little more information to be sure. Can you share screenshots of what you see in Roon for specific instances of this so we can take a closer look?

Following are a few examples: 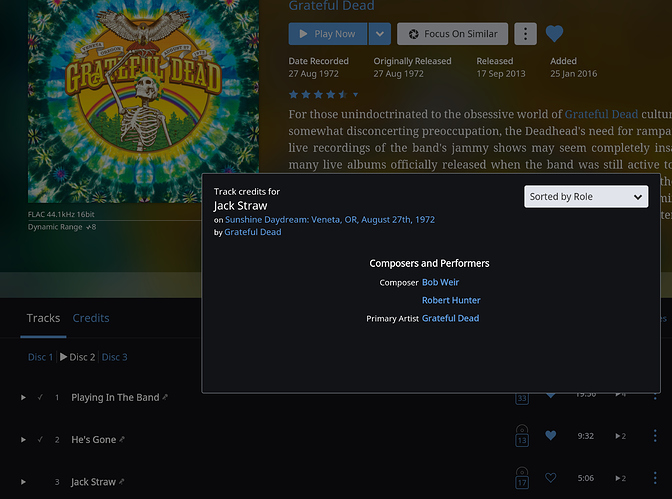 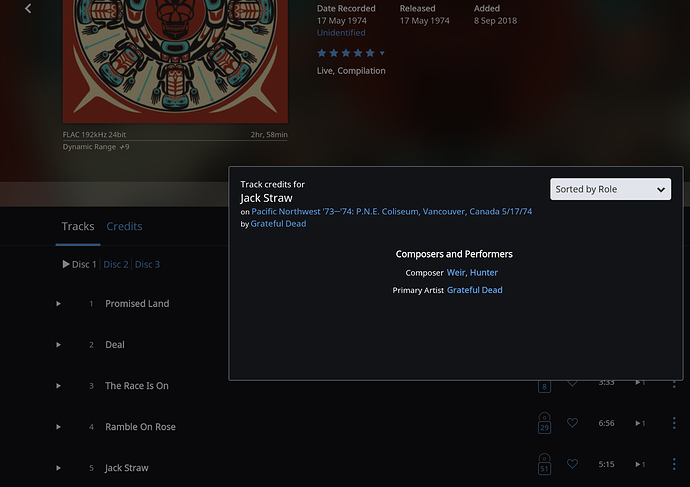 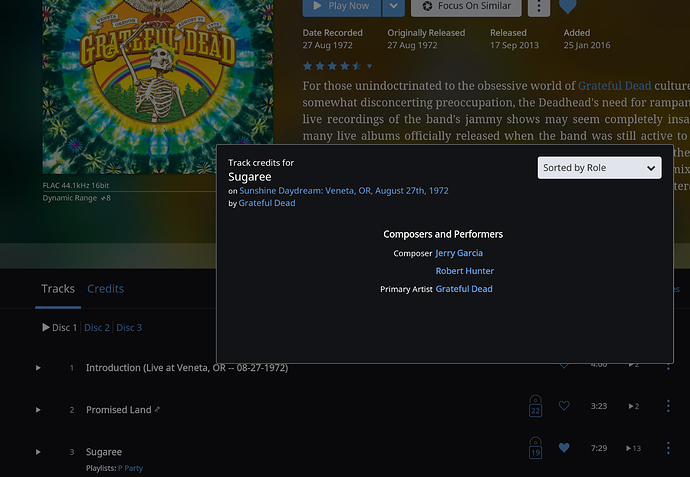 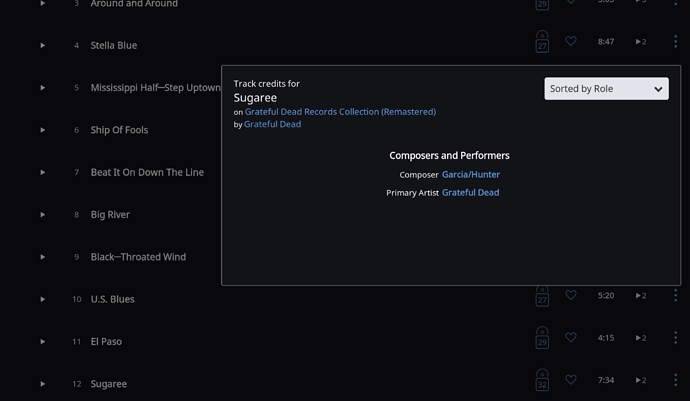 The first is again from Sunshine Day dream and the second from the Grateful Dead Record Collection. Sunshine shows 19 versions while GD Record Collections shows 32. Again these are two unique sets with no intersections. 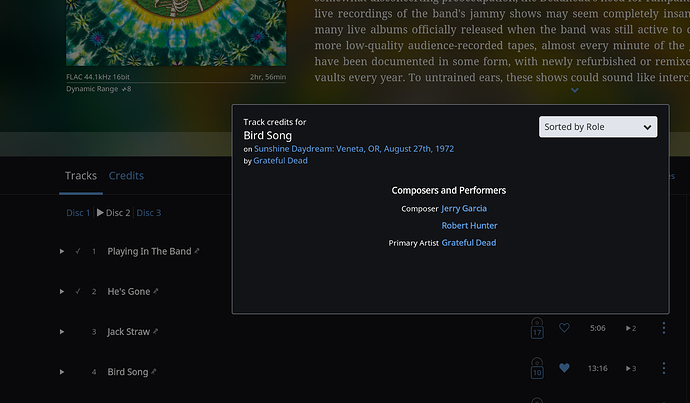 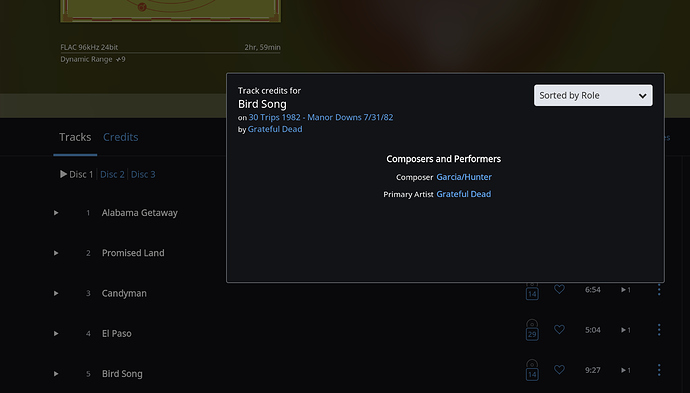 The 3 cases above involve use of first and last names verses just last names.

The following case is a swap of names. The song is “Cassidy” by Bob Weir and John Barlow. 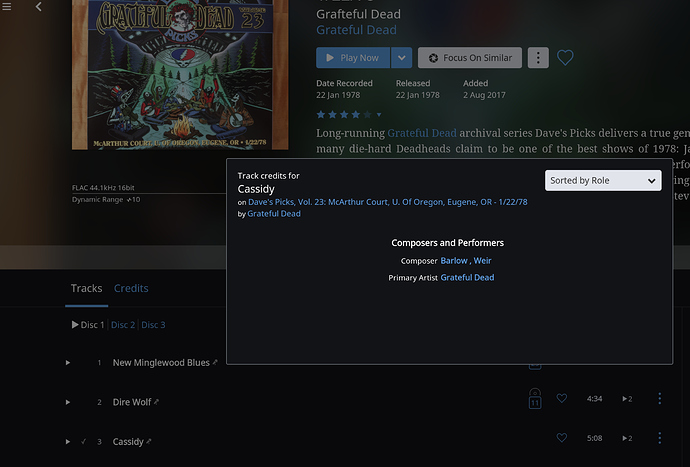 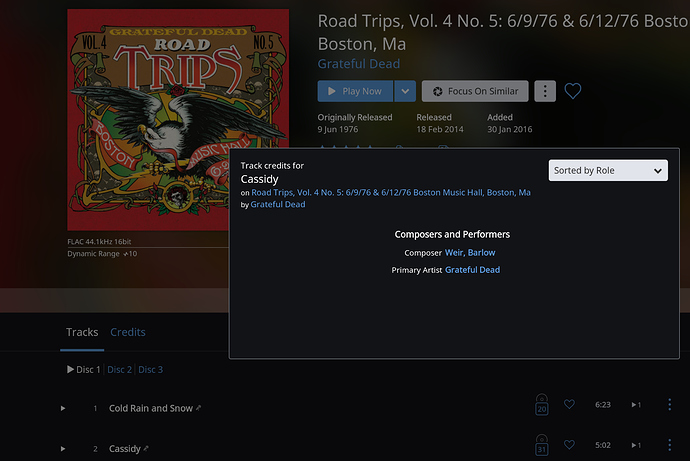 Dylan I noticed I forgot to include your name in the above post with samples of track composers that are failing to link up. Please look one message up for the samples.

Dylan - I found I could do Searches in Roon on a Song title and find all the instances found by Roon and how they’re grouped. The Roon screen shot provides what it sees as 4 different songs identified by juggling of the Composers, but same composers. Please see the below screen shot: 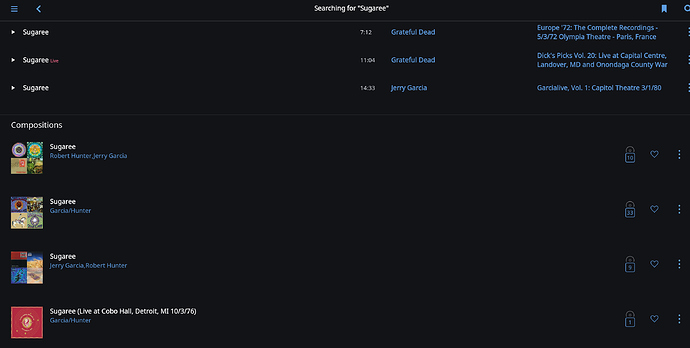 Pardon me for sticking my oar in and if I’ve misunderstood your complaint, but surely the way you have provided composer names to roon has resulted in individual composers rather than pairs. In your last example there are four

(This could be checked by browsing composers)

For cases 1 and 3, a better separator in your metadata for multiple composers perhaps?

Ditto 2 and 4 but also Roon, at present, tends not to make assumptions about a composer if only given a surname, and will create a new local one instead.

Slowly I’ve been manually editing the metadata using Metadatics to try and make these identical so they all group. But it’s a pain in the @$$. Furthermore I find for some instances (some) that no matter how I change a song’s composer Roon does not change its composer setting, even after asking Roon to rescan the track with the altered metadata. Not sure why that’s happening for some tracks, but that’s another issue.

You need to change the delimiters as specified in import settings. See https://kb.roonlabs.com/Import_Settings

Roon is not recognising yours.

Thanks Brian. I’ll give this a try tomorrow and let you know if it helps.

Once you’ve done that you could use the merge composers facility to make Garcia the same person as Jerry Garcia, etc. but you’d need to be sure that Russell or Fernando Garcia for example hadn’t been entered as simply Garcia too by your ripping tools.

I agree it would be nice if Roon had used some intelligence and worked out that it was Jerry and Robert as the composers but in practice I think it would be difficult and at present they would probably give it low priority compared to other requests.

Thanks for helping fix some of it though via merged composers. Appreciate the help.

What happens if you explicitly add (comma) as a separator? Doesn’t that separate the double names?

I did that initially after you alerted me to the delimiters section of the Setup Library options. See below.

Add spaces between the symbols

There are spaces between each character. I just double checked to be sure and there are.

I had a chat with the team about this and we took a look at the examples you’ve provided. For these, it will definitely require some editing of your tags so that these match. Using consistent tagging will definitely get you on the right track.

I find for some instances (some) that no matter how I change a song’s composer Roon does not change its composer setting, even after asking Roon to rescan the track with the altered metadata. Not sure why that’s happening for some tracks, but that’s another issue.

Can you share an example of this with us?

I’m away from home now (for a week). I’ll take a look end of next week when I return.