Composer's page sometimes fails to display all the albums

For some composers like Beethoven, the issue shows on the composer’s view (screenshots below)

Titles of the albums edited

For some composers like, here Beethoven, the composer’s page does not display all the albums associated with this composer.

Below is the screenshot of my “Albums” view with the filter : “Beethoven:Symph”. We can see here all the albums whose title begins with the filter string and, in the first place, the Symphonies by Paul Kletzki (highlighted in red). 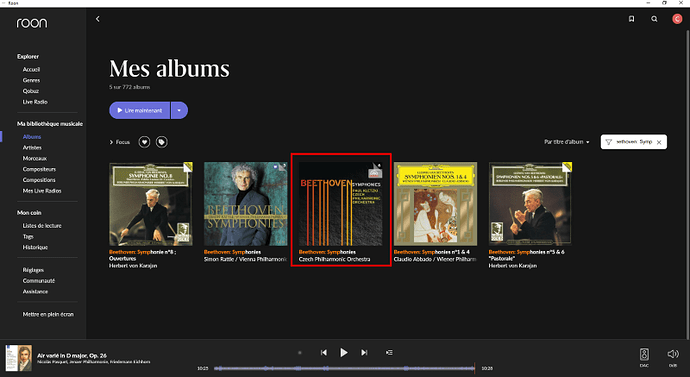 Now, let’s move to Beethoven’s composer page.
In order to be sure we land on the good page, let’s click on the link to display the album’s details then on the link labelled “Composed by Ludwig van Beethoven”. We end on Beethoven’s page and unfortunately, the album conducted by Kletzki is not displayed. No matter the sort criteria I use, this album remains invisible. Here is the part displaying the symphonies ordered by title : 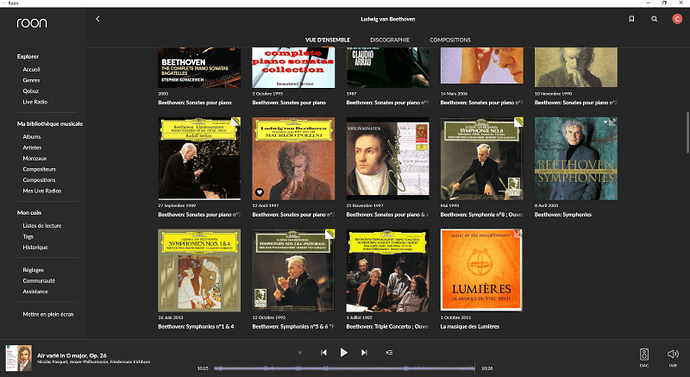 I don’t kown if it is a metadate issue or juste a rendering issue of the view but it’s pretty annoying and makes the composer page not very reliable.

I think what’s happening is that Beethoven’s “discography” consists of over 9,000 albums. It may well be that Roon limits the display. You need to use Focus to refine the results a little.

So if I use Focus to just show albums where Paul Kletzki is the conductor, it turns up: 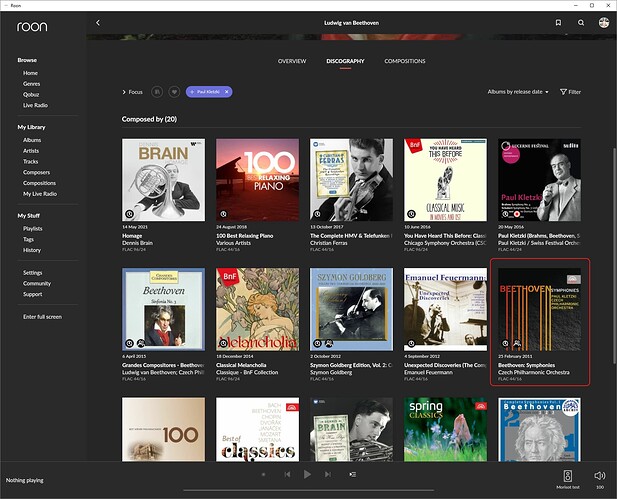 Unfortunately, the missing albums are not from the Discography tab but on the Overview tab, section “From my library”, which only contains 19 albums for Beethoven.
(well, 20 with the missing one BTW

Ah right… Can you try something? Go to the Discography tab and click the “in my library” icon (next to the Focus button) - does it show up then?

And if it doesn’t, does it show up if you clear the “in my library” button and use Focus to look for Kletzki as conductor?

Discography tab + “in my library” icon : nope, the album does not show.

OK, let’s take a look at the Album page for this boxset. Does it look like this, with the notes as seen here? 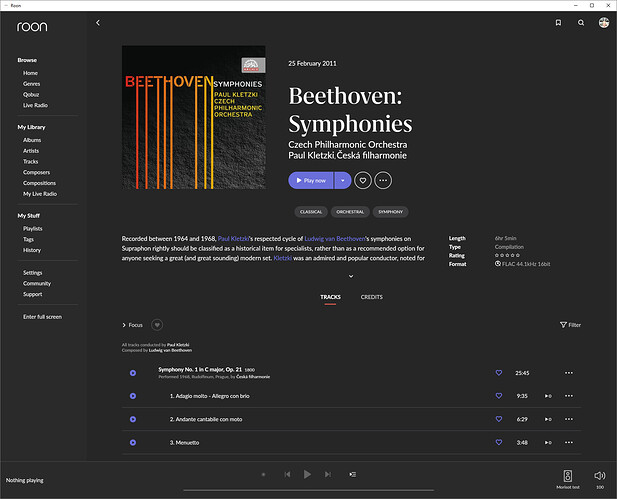 In other words, Roon has correctly identified the boxset…

Yes it does. The album has been identified by Roon database.
It only displays a few more information like “All tracks performed at Rudolfinum Prague” and some other data 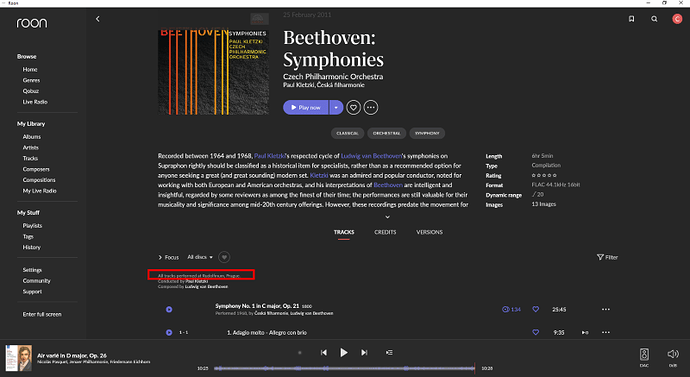 It’s puzzling. I don’t have a local copy of this boxset, but I’ve just added it to my library from Qobuz, and it’s now listed in my library… 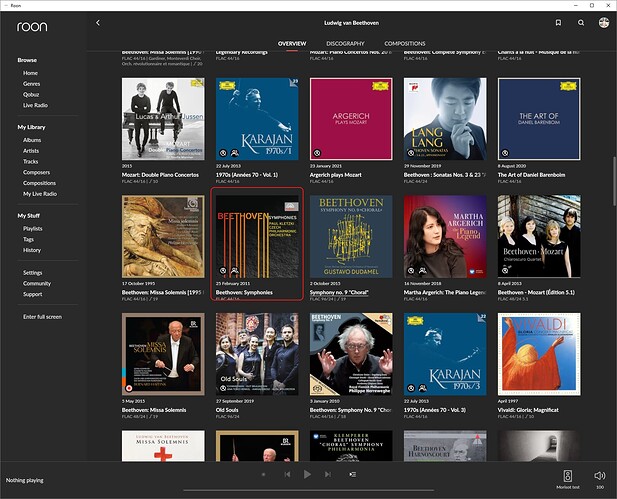 I do notice that your screenshot is different to mine. In particular, it says that Symphony No. 1 is being performed by Ludwig van Beethoven, which a) is wrong and b) may point to some bad metadata in your local files?

As for the metadata, I have not yet edited this album to correct some common mistakes like setting the composer as the primary artist in the “settings” section, that’s why it shows as “performed by Beethoven”.

Truth is that I have some other metadata issues (not mentionned in this thread, I keep them for later

). All the albums with such errors are imported from my CDs. I guess the Qobuz copy is better and more up to date regarding metadata.

Thank you for your help and your time anyway

No problem, it sometimes seems that correcting metadata is a never-ending issue. For example, I now see that an album of Vivaldi’s music has crept into my list of Beethoven’s albums - it turns out that metadata rot has infected it somewhere along the line…

and so he fell on the battle field