I have Sting’s “Bring on the Night,” which comes as 2 CDs. I experimented with combining the 2 scanned CD covers and ended with a .jpg that is 5282 x 2838 pixels. But when I pointed Roon to the combined .jpg, the image was smallish (below). Is there a way to enlarge the displayed image? 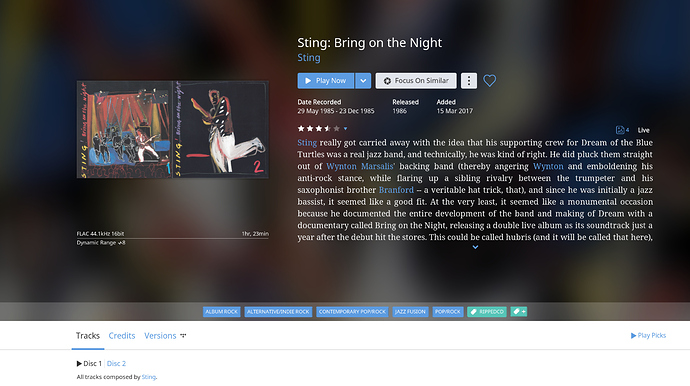 It also looks like the folder has 4 images with this album, are you using Roons auto-matched cover, or have you manually changed it? You can edit the album (3 dots) and manually select one of the other images:

The concerned image is one I created from 2 scanned CD covers. I used the edit function to get Roon to pick up the image.

Possibly because your image is on the large size, so Roon kicks in some autoscaling that results in a smaller image? Try resizing the image down slightly?

If you then click on it a second time it usually fills the whole screen, no?

Pretty much. But I’m more interested in the “standard” view (as I showed in the screenshot).

There is currently no way to increase the size of that shape of image without maximising it by clicking. I would suggest using the (square) album cover as the main image, as that will fill the space better. You can then have that gatefold image as an extra to scroll through.

There’s a maximum width for cover art on this screen, so if you use a rectangular image like that it’s going to be scaled accordingly.