I absolutely love the way compositions are handled in 1.3. I had to re-identify my album but now every track has a link to other performances both in my collection as well as on Tidal. This is what’s i’ve been dreaming of! Thanks!

I guess it’s impossible because of the amount of albums out there but I expected Tarja’s cover of Alice Cooper’s “Poision” to actually show up. Looking at the metadata of Tarja’s album it’s not very detailed.

Regardless it’s quite cool.

Yeah, I have some albums for which Roon can match the album, but seems to lack any metadata other than track titles. I haven’t figured out if there is a way I can manually identify the correct compositions?

Yes. If they are compositions you have performances of on other albums you can merge them in the composers work list. (You may need to add composer to the unidentified track, particuarly if from Tidal.)

If you don’t have another performance 1.3 will have created a composition entry for the track which you can edit to look like a composition from an identified album.

All bases are covered pretty much. It’s excellently done.

Excellent. I’ll give that a try. Thanks!

For some albums, the movements belonging to a composition are still not grouped, so they appear as different compositions in the composition list for that composer. Any advice how to group them into one composition?

The metadata comes from Rovi, it is properly displayed at allmusic.com:
http://www.allmusic.com/album/weber-the-symphonies-bassoon-concerto-andante-e-rondo-ungarese-mw0001406063 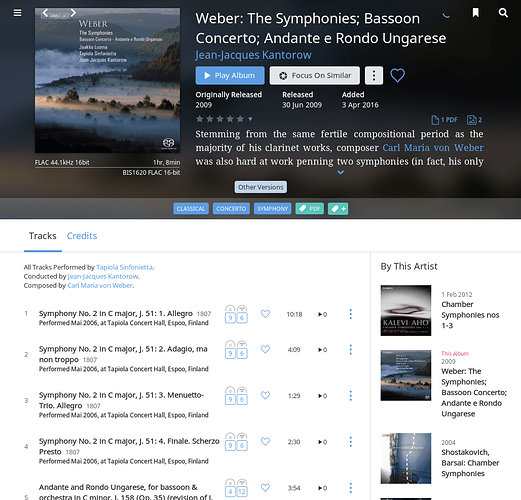 You have so much metadata there - including composer and Classical genre - that this is likely to be an error from the provider. This kind of error cannot currently be corrected by the user.

@joel will be able to take a look.

By the way, even if you see that the Rovi review is in Roon, that doesn’t mean everything you get from the Roon metadata server is from Rovi. These days it’s more sophisticated than that. (Go @joel!)

This looks like a particular class of metadata provider carelessness where they’ve given a unique performance id to different parts of the same performance. I agree that it’s very annoying, but it’s not necessarily the easiest thing to fix!

There’s an open ticket to see what we can do about this on Roon’s side. Thanks for your patience!

I gave a like to the first post in this topic, but I can’t stop there. I was in the process of painstakingly (and slowly!) re-tagging the ID3 tags for my classical music albums using the strategy here:
Audiophile’s Corner — The Zen of Classical Music Tagging (Part 3): How To Write Albums And Compositions

It was a labor of love, and although I don’t have nearly as many classical albums as a lot of Roon users, it was still labor.

With the advent of Roon 1.3, I don’t feel like I have to continue that task. The new metadata display for Compositions and the links to Performances everywhere is absolutely brilliant, and I’m grateful for the hard work the Roon team put into this so that I don’t have to. Cheers, everyone!

A lot of my classical music tracks are already tagged with Work/Movement metadata - most notably my ALAC files where the metadata format explicitly supports those fields. However, it appears to me that when Roon imports those files it ignores those metadata fields completely. This wouldn’t be such a problem if it then inserted its own metadata, but sometimes it fails to do this when its on-line metadata sources either don’t have, or can’t find, the appropriate information. Is that intentional, or can it be fixed sometime?

It has often been said. We need to be able to point Roon at where in the metadata our carefully defined data is, essentially map fields. 1.3 has moved a little towards such functionality, but has not really grabbed the issue by the throat. We remain living in hope that we’ll get there eventually.

Yes. 1.3 is a disappointment to me in that respect. Especially in regard to getting it to use my Work, Movement and Parts tags (from editing in Yate).