Connecting to Tidal with Bluesound Node 2i

I just upgraded my home sound system. I have a Bluesound Node 2i paired with an excellent Denon AVR in my family room, and stereo pairs of Sonos speakers in two other rooms. I have a Tidal Hifi account. I have a small collection of ripped CDs and purchased FLAC albums stored on my Synology NAS. I set up the Roon Core on my NUC. All of these elements are hardwired to my home network except one of the Sonos rooms which uses Wi-Fi. I’m the poster child for Roon.

I’m happy to read a KB article or other explanation vs. a direct answer here but as a 14-day trial user I’d like to be assured that Roon isn’t dumbing down the fidelity of my gear. I’m also curious now if the Node 2i “plays nice” with Roon. Some google searches indicate otherwise but the articles are somewhat old.

You might want to verify the Node 2i is Roon Mode in the Node 2i settings. I gave mine a name to easily recognize it. This should just be setup that way without you needing to do anything. See pic. 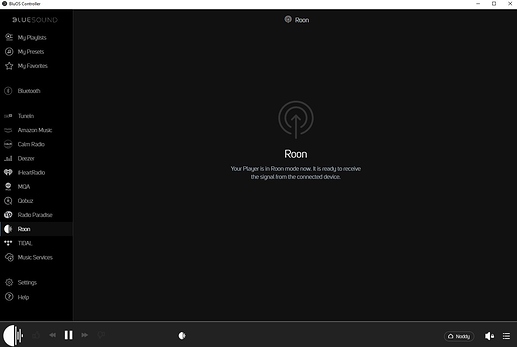 Then it should just appear as a network option in Roon’s Settings/Audio which you would then Enable. Once Enabled, you can then select it as the output target.

If all you see is the Airplay option then, I would ask what computer is running the Roon Core.

I looked at the settings section of my Node 2i and I’m not seeing any reference to Roon. I did some googling and haven’t found anything specific. The most likely place is in the Audio settings but I don’t see anything there. If you could give me a pointer I would appreciate it. There is no “'network option” in my Audio settings area.

Hi Michael, I edited my post to be a bit more specific. The network section is probably called RoonReady.

Thanks a ton. While you were writing your reply I continued poking around and found exactly what you pictured. Then I went back to Roon and saw “Bluesound” (which was already the name of the “room”, so I renamed it “Bluesound AP” to make the difference clear. I switched to the new “Bluesound” and I’m listening now… When I look at the audio path I see it is using RAAT which I guess is Roon’s best, is that right?

The same thing happened with my Sonos speakers (I have two stereo pairs in two rooms). There was one option for Airplay and one for “Sonos Streaming”. Is Sonos Streaming better than Airplay. My gut tells me that Airplay is the lowest common denominator and that Sonos Streaming should be better.

I’m having fun setting this up and exploring the possibilities. It’s not super-intuitive however.

RAAT which I guess is Roon’s best

I’m having fun setting this up and exploring the possibilities. It’s not super-intuitive however.

No problem. We are a friendly bunch around here, just ask. BTW, I’m just a fellow user.

I really appreciate it. I’m excited by the depth of what I see and the possibilities. I was juggling the Sonos app, the HEOS app (for my Denon AVR), the Tidal app… Plus I had to figure out how to tell my wife how to use all that. Now it looks like the Roon app will do it all and point to all three of my rooms.