Connection issues ? Check multicasting is on in router

Hi, I’m not sure if someone else has already addressed this issue for you, but I had the same problem with my ASUS AiMesh setup—my iPhone Roon app was unable to locate Roon Core, unless my phone was connected to the same node on which the Core was running. And if I did successfully connect to Roon and traveled to a different node in my home, the Core would disconnect until I traveled back.

This issue has been raised quite a few times in various threads. The router tweak that resolved the issue for me was to enable multicast routing in the LAN—> IPTV settings in the ASUS GUI. I left all other settings unchanged, and the problem has never recurred. Multicast is disabled by default; it’s typically employed to enable direct connection of cable TV whole-home streaming access points to the ASUS router, when it’s configured via IP Passthrough in front of an ISP’s provided residential gateway.

However, Roon apparently also requires multicast capability to maintain its data connection across all audio devices on the network—by definition the Core functions as a multi-room, multi-device network aggregator, constantly processing two-way traffic to a multitude of LAN clients simultaneously in real-time. That’s basically the definition of multicast routing itself.

The only down-side I’ve found after enabling multicast is that when I subsequently ran the integrated WAN-side internet speed test in the ASUS GUI, my usual gigabit download speeds dropped by about 40%—however I suspect that this phenomenon is an artifact, because speed tests on my client devices remained unchanged and robust.

Yes, this is often required.

Don’t use the integrated speed test.

Do a web browser based speed test. I got this from my Asus AX-86U with multicast routing enabled to Windows 10 via LAN (but I don’t use AIMesh): 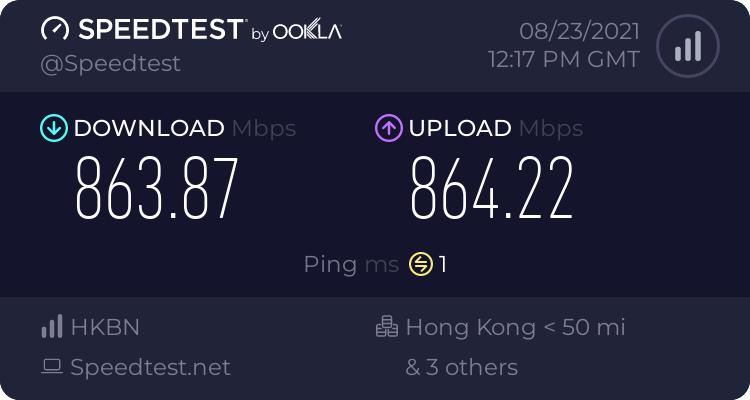 Thanks! As I mentioned in the last paragraph of my post (which may have been unclear), I think the decreased speeds in the router GUI speed test are an artifact (factitious), because performing the same speed test algorithm (Ookla) on my devices does not show any speed degradations when multicast is enabled.

Strangely though, prior to enabling multicast on the router, I was achieving speeds on the built-in router GUI test in excess of the maximum advertised speeds from my ISP—likely because I have a 2.5 gbps connection from an aftermarket high-end modem to an ASUS GT-AX11000 router. Upon enabling multicast these maximum speeds decreased by nearly 40 percent—again, with no appreciable decreases in network performance on my connected LAN devices.

Not sure I can explain why, but practically it doesn’t seem to matter. It makes Roon work seamlessly, so I thought I’d post the tip.