Quick question for the experts here. When you have 2 (or more) different albums with different versions of the same composition, but Roon fails to identify/connect them, is there a manual way to do it? I vaguely remember seeing a screen where I would tell Roon which version should be the “master” entry for the composition, but I can’t find my way to that screen any more. If someone could point me in the right direction I’d really appreciate it!

On the left of screen, select compositions 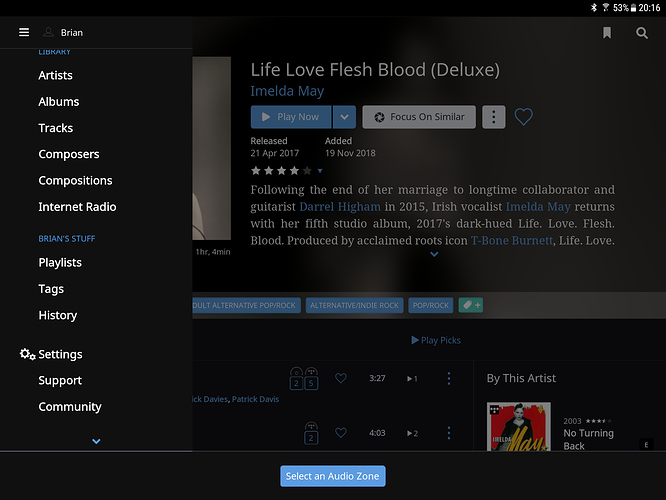 On the resulting screen, ensure only classical is set appropriately.
Type start of composer’s name in funnel. 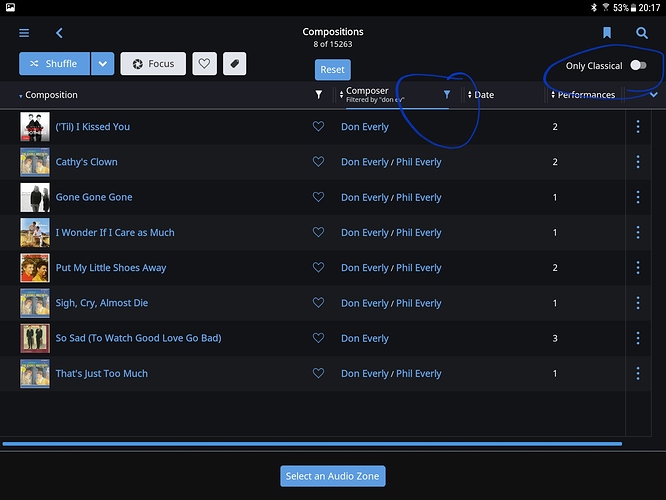 You’re the best, Brian, thanks!

Do you know if there is a way to undo the link? I’ve noticed that Roon is linking some compositions incorrectly. Editing the composition doesn’t seem to offer an option to “unlink” the performances.

Settings, library, unmerge compositions will fix any that you have made. I don’t think you can unmerge ones that Roon has made.
However Roon shouldn’t be merging compositions incorrectly in the first place. It checks that title and composers are identical at least. Do you have instances of identical titles and composers that are from different compositions?

From my experience, that is correct. You can only un-merge compositions you have made yourself manually.

Unfortunately, identical composers and titles is not a safegaurd against roon miss-identifying compositions. Roon will simply misidentify both of them. I have had examples where roon has misidentified a dozen or more compositions but merged them all together because the titles and composers are identical.

Like the OP I find roon merging compositions incorrectly to be rather common. Several on this forum report this regularly. Some composers are more prone to this problem than others. The root cause is that a simplistic composition identification around opus numbers simply will not work in many cases. There are too many exceptions to this rule. In many cases it will go unnoticed in your library unless you have the habit of comparing interpretations or creating playlists with more obscure “covers”. Just a few examples:

Debussy did not use opus numbers. He was only cataloged in 1977 by Lesure, which Lesure completely revised in 2003. Metadata with any combination of no Opus or L numbers, English or French titles, one or other, or both of the L numbers is extremely common. This leads to a lot of randomness and mistakes in roon’s composition identification process for Debussy.

Telemann’s output was vast. It is rather hit and miss how “clean” the cataloging is in roons metadata sources. In particular, the TWV numbers are case sensitive so that TWV 43:g2 is different to TWV 43:G2. I find it extremely common for the case of catalog numbers to be mixed up and for roon to rather randomly group Telemann compositions.
.
3. Almost all the Russian romantics

All the famous complete ballets have “suites”, sometimes 3 or more, I find it extremely common that roon mixes the ballets up with the suites or mixes different versions of the suites and so does not group the compositions correctly.

Once roon has grouped compositions incorrectly, it is quite difficult to ungroup them.

a) You can try cutting and pasting the canonical names from allmusic and also adding WORK/PART tags to the multi-part compositions. Sometimes this works.

b) Often though you just have to start all over again and re-import. In this case, move the album somewhere roon is not looking. Roon will remove he album and its compositions from your library. Then “clean library” so roon has no memory of your album. Perform the edits in a) with an external tagger. Re-import the album and roon will usually identify your compositions correctly and group them differently.

Thank you, Tony and Brian for your comments. Tony, being a Baroque fan I couldn’t agree more with your assessment of Telemann’s oeuvre. Brian, I went to that screen and indeed, only a handful of compositions are listed on that screen but none of the associations that Roon makes on its own. I guess I’ll continue relying on carefully curated Work/Part tagging, also using Tony’s trick of removing albums and forcing a “clean”.