It’s probably just coincidence that within one day of the 1.7 update my core computer won’t power on, but here we are. The hardware I was using is old, so it’s not worth just replacing the PSU, so I guess I will buy a new/refurbished computer for the core.

Space is a big consideration, so does anyone have a recommendation for a low cost NUC or other small form factor PC that will run 1.7 without problems?

Also, does anyone have a line on a Black Friday/Cyber Monday sale or some kind of deal for the above?

Can you share your library size and if you use DSP or multiple zones.

Library is 22,000 tracks, about 800 GB. I do use DSP in multiple zones. I still occasionally rip CDs, so something with an optical drive would be nice. I have a few m.2 drives available, so I thought it would be nice to be able to use one of those as a boot drive.

I think the i3 NUC will be fine for you …

Yes, I think so … this would be equivalent to the Nucleus. Library capacity Up to 10,000 albums (100,000 tracks) Multi-room streaming Up to 6 simultaneous zones DSP capability All DSP functions available in the PCM domain. Certain combinations of functions using DSD source or destination formats, upsampling, or multichannel processing may not be possible. You can buy the components direct from Amazon for 330GBP (8th Generation i3 NUC.) See ROCK for Small to Medium Size Library in the KB.

You can add a USB optical drive for ripping direct to your library.

An i3 seems enough for current requirements, but I’d suggest considering an i5 because things can change. I like the price, thermal and power footprints and performance specs of the i5.

I am looking at doing the same thing.

It depends on the DSP one plans to utilize. If upsampling to DSD plus multiple zones then definitely a case can be made for i7 (or even better) but for most, i5 is likely the sweet spot of low power consumption, less heat, and plenty of CPU throughput.

i3, i5, i7 only tell us the family. There are many variants and generations within each family. A 2012 i7 isn’t anywhere close to a 2019 i7 in performance, for example.

Thanks Larry. I understand a 2012 i7 is not equivalent to a 2019 i7 but is any version of an i3 a valid recommendation for the OP given multi zone dsp?

Is a current version i3 that much better than say a haswell i7 as is in my mid 2015 15” macbook pro for dsp processing to dsd512 for one zone with a small library.

As for the DSP, I should have said that I’ve been doing the DSP (mostly a small amount of parametric EQ) on the ancient (below spec) 2nd generation i7 I was using previously. However, it looks like 1.7 might have made this older-than-spec processor obsolete, because it doesn’t support OpenGL: Roon's OpenGL Requirements
(I was running server-only, but it worked.)

I’ve placed an order for a Shuttle XPC XH110 barebones system, ($180) and a 7th Gen i5-7400 processor (also $180). This system lets me keep an internal optical drive for CD ripping when I need it. I have a friend who works for Microsoft, and I can get Win10 Pro through her for $40. I can pretty much complete the system with hardware I already have, including an M.2 NVMe boot drive, which should help performance considerably. I was hoping to spend a little less than this, but all the hardware in my old machine was ancient, so I guess it was time.

Thanks for the advice! I’ll try to post an update after I get it up and running.

A gen 8 i3 processor is a very capable device. This performance comparison between two mobile rated processors as fitted to a NUC is quite telling.
https://cpu.userbenchmark.com/Compare/Intel-Core-i3-8109U-vs-Intel-Core-i7-7567U/m609620vsm219709

This Shuttle mini system is in service and doing great. Here’s what I ended up using:

Pretty amazing that this thing has a footprint this small but holds a desktop processor and three drives (M.2, 2.5", and slim optical)!

The part that’s even better is that it runs almost silently. The fans come for a few seconds when it boots, but otherwise, it stays pretty quiet. 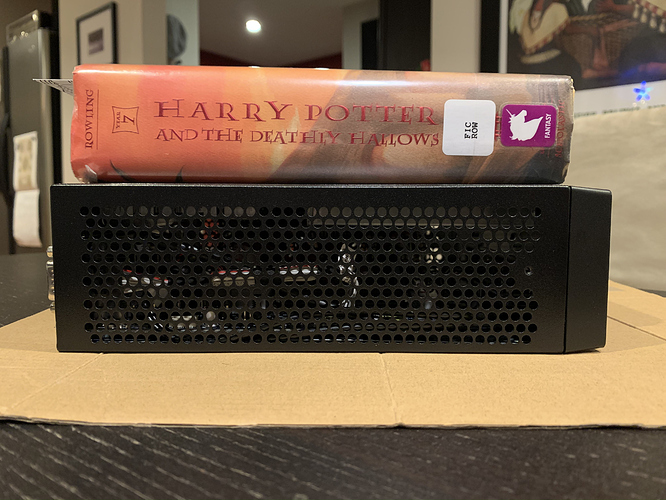 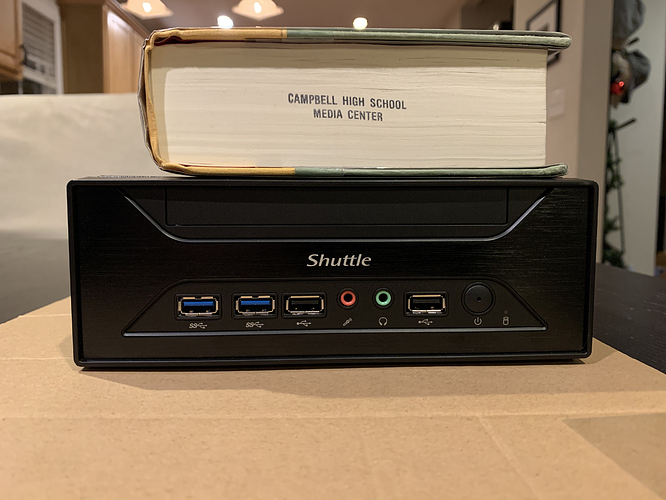