Hi,
I’ve noticed that the album ‘Costello Music’ by The Fratellis has an incorrect track order which reflects neither my iTunes purchased album or the AllMusic track listing. Specifically, track 4 should be “Chelsea Dagger” and the current track 3 (“Cuntry Boys and City Girls” - spelt differently on Roon) should actually be track 13.
There is 1 disc with 13 tracks. It is automatically identified and I’ve not made any edits. I get the issue both on my local version and the Tidal version. Note that Tidal has both the same version as this (dated 2007) and another version (dated 2006) with a different track order similar to that of the Roon version. Both the Tidal versions in Roon use the 2006 track ordering. 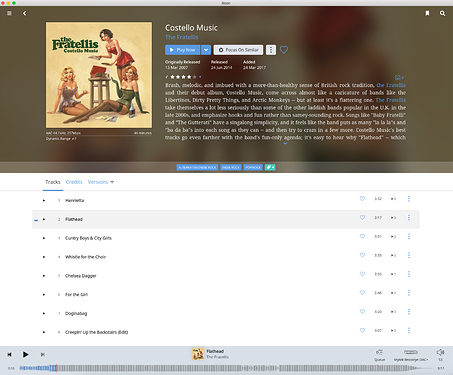 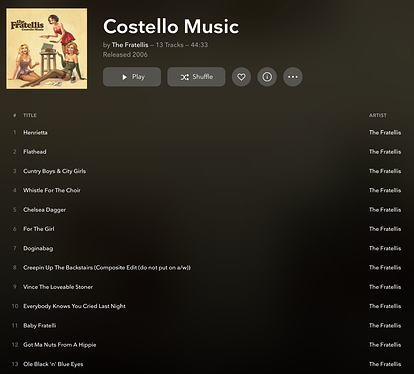 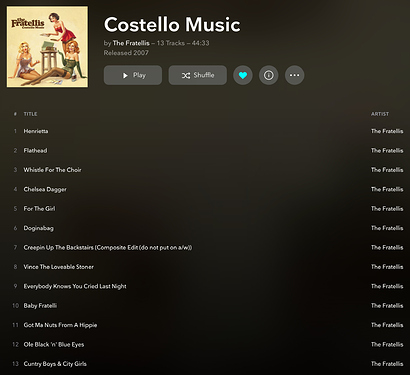 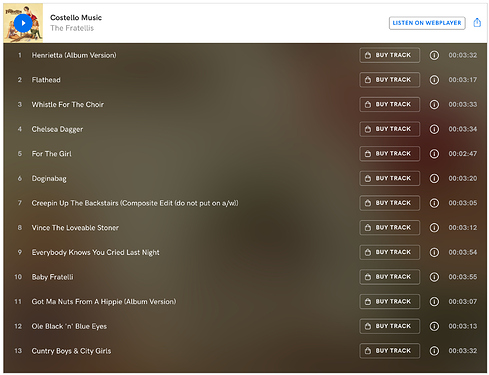 As a result when trying to play “Chelsea Dagger” (track 4) I get the incorrect track played (and presumably all subsequent tracks are also off).

I looked into this, and it looks like there are a couple different versions of this album that have different listings. Wikipedia has the same track order as what you’re seeing in Roon, and I also found that there are back covers with track listings as shown in Roon and as you’ve described.

It looks like we also have different versions of this album in our data with the different track listings. In order to change the version, please try the following:

Let us know if this helps!

Hi Dylan, thanks very much for your reply. Unfortunately option 2 isn’t quite right either (track 5 - “The Gutterati?” doesn’t exist on my album, throwing out the order of the subsequent tracks, and it misses my track 13) - in fact none of the 10 versions match my album. I’ve worked round it by editing the track order by choosing Option 10 and fiddling around manually and just putting the tracks into the order which Roon expects. But it would be nice if one of the many album options reflected the track order from the 2007 version on TIDAL (and Qobuz).