Would love something that:

a) said when an album was last played. I know I can sort tracks by last played, but tend to browse by album where i can’t see that. Date in the same area as ‘Released’, ‘Added’ etc maybe that shows the last date any track on the album was played?
b) lets me search for things I’ve only played once (or twice maybe) - played less than x, but not 0 times. Again by album ideally. I have loads of stuff I’ll probably never play (ancient stuff I’ve had for years, or things my other half bought, that I’m only bothered about if I’m looking for something specific), but I’d like to find the things I bought in the last few years, played once or twice, then forgot about.

great suggestions, would prove very useful to the likes of me and even Roon Radio if you wanted only ‘new blood’ in its picks.

@therk, you can do a) through focus.

It isn’t Radio, but you can then hit shuffle on only the unplayed stuff 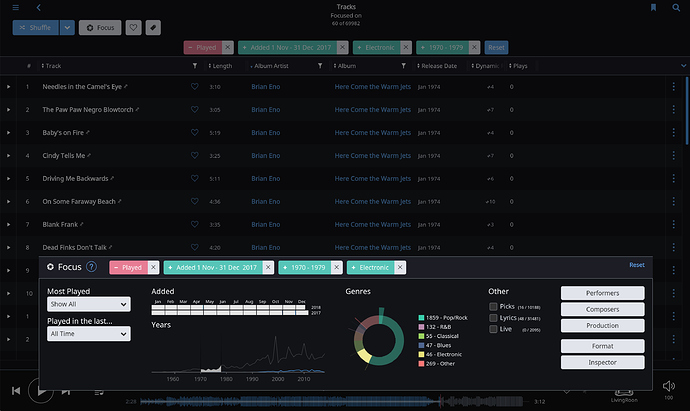 say unplayed albums recorded in the 1960’s added in the last 6 months).

Where can you do this in focus?

Go into focus, pile criteria on… part of the under-the-bonnet beauty in Roon is that it allows you to do stuff like this, and it’s super-responsive at it.

Go to focus. Select played in “all time” then select the result filter to make it a negative which will give you all tracks never played. Then select the genre, date range etc.

Frightened the life out of me how many of my tracks have never been played.

As long as they were played pre Roon.